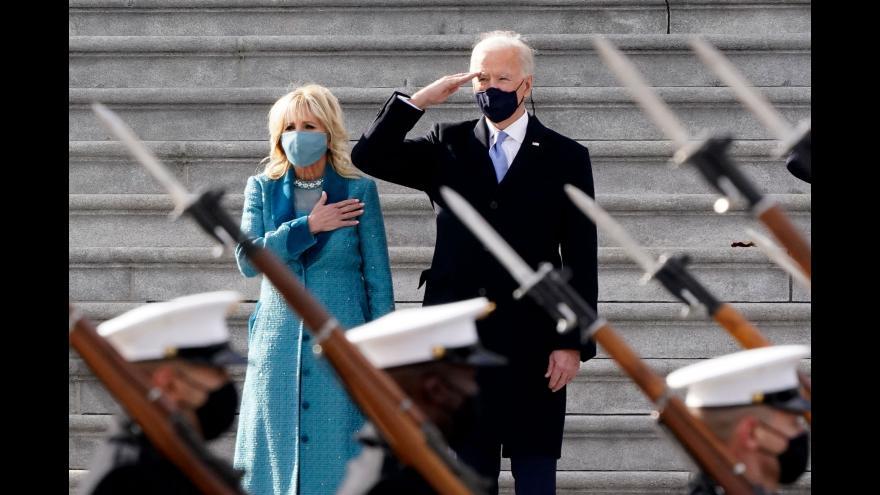 President Joe Biden and his wife Jill Biden watch a military pass in review ceremony on the East Front of the Capitol at the conclusion of the inauguration ceremonies, in Washington, DC, on January 20,

(CNN) -- When President Joe Biden walked into the White House on Wednesday holding hands with his wife, it all seemed so normal -- or at least as normal as a pandemic presidency can be.

As a signal the White House will now operate in the manner the government recommends in the middle of a pandemic, many of Biden's staffers will continue working from home in the coming days and weeks.

Officials said they received new government computers and phones that were activated at noon on Wednesday, allowing them to conduct official business from living rooms, kitchens and home offices.

While many of the West Wing's individual offices have been assigned, the building will not be at capacity, as it was for much of last year despite the pandemic. The few places that did implement some work from home requirements under Trump, such as the National Security Council, will continue having officials work remotely.

National Security Council staff who arrived to work at the Eisenhower Executive Office Building on Thursday were largely sent home and told they will be teleworking for the foreseeable future due to stricter Covid-19 measures being imposed by the administration.

According to an administration official, only "continuity of operations" staff will be allowed to work inside the building, which includes national security adviser Jake Sullivan and his top advisers, as well as the heads of a few key directorates and other key personnel.

Other staffers who need to access top secret information would be allowed in on an ad hoc basis, this official said. Many staffers who had been going in previously are being told that they'll have to stay home.

That doesn't include Biden's top staffers such as chief of staff Ron Klain and press secretary Jen Psaki, who were in the building on Wednesday when Biden arrived for the first time.

But other mid-level and lower level staffers will work from home, a departure from Trump aides who mostly continued coming to work without wearing masks.

Psaki said during her press briefing on Wednesday that all staffers entering the complex will be required to undergo a Covid test, wear an N95 mask and adhere to social distancing guidelines. Plexiglass barriers were also mounted on desks in the West Wing, something Trump officials had resisted.

"The President has asked us to also be models to the American people, and that's vitally important to us as well," she said.

Acting as a role model for the country rather than an undermining influence was another sign of Biden's intent on reviving the way White Houses used to run.

After a thundering four years of chaos, there were other signs the volume would be set a little lower.

Biden's daily schedule had been written without a bumptious declaration he would be toiling morning to night. Swearing in staff remotely from the State Dining Room, the President warned against infighting and disrespect -- "I'll fire you on the spot" -- rather than admitting he actually liked his underlings at each others' throats.

The executive orders he inked in the Oval Office had been vetted ahead of time by administration lawyers. There was no midnight scramble to ensure they were legal or competing factions trying to insert different language. He did not hold them aloft and slowly pan his signature for the cameras.

The tweets came and went and no one was fired. Tom Hanks was involved.

After a four-year presidency governed by turmoil and active disregard for the phrase "how things are done," Biden's entry into the White House ushered a conscious return to tradition and protocol.

It was hardly a mistake. Biden ran as the candidate who could repair the basic institutions and conventions former President Donald Trump had shattered. And he promised his years in government would bring a level of competence to a country ravaged by coronavirus, which the previous administration badly mismanaged.

Returning to "how things are done" was Biden's calling card. And on his first day as president, in big ways and small, he ensured things were done as they were.

At her first daily briefing, the White House press secretary opened by calling on The Associated Press, a tradition that had been discarded, and managed to answer questions without a slew of insults -- and without any mention of crowd size.

Photo-ops occurred without half-hour parlays with reporters that obscured their original intent. A model of Air Force One redesigned in brash red and black that once adorned the Oval Office was gone, the fate of its new color scheme unclear.

"I haven't had the opportunity to dig into that today," press secretary Jen Psaki said when questioned about the airplane paint job, relegating an issue that once preoccupied hours of presidential time to the back burner.

Biden's aides have long sought to tie his institutional knowledge and respect for traditions to an ability to repair the nation's problems. They paid attention to things such as language and optics to project a readiness for the job, even subconsciously.

Just like the President himself, the team Biden brought with him to the White House has more experience in government than any administration in memory. Led Klain, who has worked in two previous administrations, Biden's team is stocked with alums from President Barack Obama's White House and other areas of government.

When they arrived to the West Wing on Wednesday morning, many knew their way through the warren of offices and meeting rooms. Unlike Trump's team, which went for several days without figuring out how to switch on the lights in the Cabinet Room, Biden's aides know how the building works.

So, too, do they know how government typically operates -- or at least how it operated before Trump came along.

Officials say one of Biden's primary goals in his first days is to stabilize the country and restore a sense of normalcy after a divisive four-year stretch under Trump. For a country exhausted by the daily turbulence of Trump's presidency, a more traditional commander in chief could return the White House to the back of Americans' minds rather than existing as a pervasive anxiety.

"Politics doesn't have to be a raging fire, destroying everything in its path," he said during his inaugural address on Wednesday.

That isn't necessarily how Trump's supporters see it. They saw the previous President's willingness to abandon the norms of the presidency as a sign he was abandoning a system that had left too many people behind.

His tweets, which ceased this month when Twitter suspended his account, were a balm for those tired of staid political correctness. His unvarnished press availabilities provided a direct view into his thinking, even if they were usually riddled with lies.

The management style he employed -- which could generously be described as uncontrolled chaos -- ensured he was the focus of attention all the time. He believed having advisers duke it out in front of him usually led to the best possible outcome.

Decorum became self-defined; while Trump insisted that he be granted the utmost respect because of the office he held, he offered little in return to the system of Democracy that put him there.

Ironically, Trump seemed to relish the more traditional aspects of his job the most: the military reviews, the brass bands, the shows of deference.

But he openly acknowledged that his style wasn't normal. He called it "modern-day presidential."

Biden, at least during his first hours in office, is going for regular presidential.