Manhattan DA returns 58 antiquities to Italy, including 21 seized from the Metropolitan Museum of Art 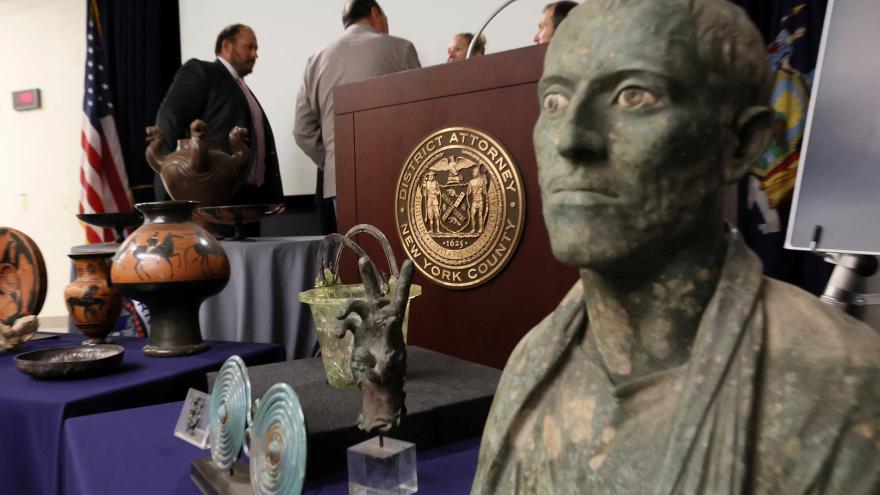 (CNN) -- Nearly 60 antiquities valued at almost $19 million were returned to Italy in a repatriation ceremony, the Manhattan District Attorney's Office announced Monday. Some had been seized from New York's Metropolitan Museum of Art.

"These 58 pieces represent thousands of years of rich history, yet traffickers throughout Italy utilized looters to steal these items and to line their own pockets," District Attorney Alvin Bragg said in a news release.

"For far too long, they have sat in museums, homes, and galleries that had no rightful claim to their ownership," Bragg said.

Some of the pieces being returned include a marble head of the goddess Athena dated 200 BCE; a drinking cup dated 470 BCE; and the bronze bust of a man from around the first century CE or late BCE, according to the release.

Consul General of Italy Fabrizio Di Michele praised the DA's office and Homeland Security Investigations for their "tireless and steadfast commitment" to reclaiming these items.

"These extraordinary 58 masterpieces are an invaluable treasure of our history and heritage," Di Michele said. "It is to be underlined that this is the third repatriation ceremony that takes place in just nine months."

The DA's office said they seized 21 of the pieces from the Metropolitan Museum of Art. CNN reached out to the museum Monday for comment on the seizure and repatriation of those items.

The repatriation is the latest in an ongoing effort to return cultural artifacts to their country of origin after being illegally sold to private collectors or museums.

Stolen antiquities worth nearly $14 million were returned to Italy in July, including dozens of artifacts seized from Steinhardt.

In 2021, the Met returned three African art objects, including a pair of 16th-century Benin brass plaques, to Nigeria.