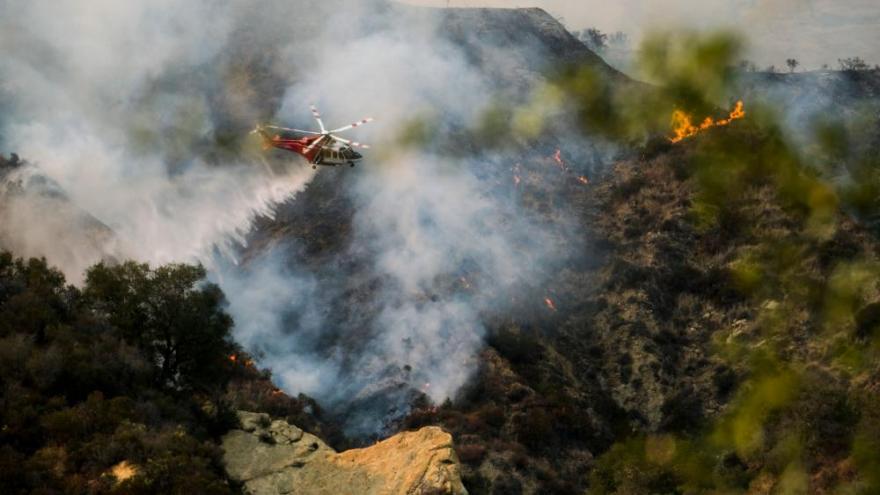 A firefighting helicopter drops water on a brush fire scorching of an area west of Los Angeles Saturday, May 15.

(CNN) -- Mandatory evacuations have been ordered for the area near Topanga Canyon due to the Palisades Fire, with more residents on standby to leave, according to the Los Angeles County Fire Department.

The area affected, at Topanga State Park in the Santa Monica Mountains, is about 20 miles west of downtown Los Angeles. By Sunday afternoon, the fire had burned 1,325 acres and remained at 0% containment, the fire department said on Twitter.

Two zones, identified as 4 and 6, of the department's tactical map have been ordered to evacuate, according a tweet from the Los Angeles County Fire Department Saturday night. Zone 4 includes everything east of Topanga Canyon between the Community House and View Ridge. Zone 6 is everyone north of Entrada, south of Oakwood and east of Henry Ridge, it said.

The department issued a new evacuation warning for additional homes in the area Sunday afternoon. "All residents in this area are urged to prepare for a potential evacuation based on the developing fire activity. Gather your valuables, medicines etc and load them into your car so you are ready if asked to evacuate," it said.

Both water-dropping helicopters and some 300 firefighters have been fighting the blaze on "steep and rugged terrain," Ortiz said.

It is difficult to determine the fire's containment because overcast weather is making it difficult to fly aircraft over the area, Ortiz said. Rainy weather Sunday morning helped contain the blaze, but officials expected the rain to stop by noon local time and fire activity to ramp up.

Los Angeles County Fire Department Firefighter Sean Ferguson was concerned, as winds kicked up slightly in the area on Sunday afternoon, as a lot of shrubs and trees had been preheated by the sun and heat of the fire.

"We will again fly our Fire Hawk helicopters at night, which we did Saturday," Ferguson told CNN. "They're effective in steep terrain because they can drop 1,000 gallons of water each."

Firefighters are working to keep the fire away from an area that hasn't burned in more than 50 years, Ortiz said.

It is unclear how many homes or residents are impacted by the mandatory evacuation order. Homes are not currently threatened, according to Ortiz.

"There's a lot of dense, thick material there, oily plants that have dried out because of the drought," Ortiz said. "So that's our objective today to try to keep it out of that and protect the communities and neighborhoods that are to the west of this fire because that's what's closest to it."

No injuries had been reported as of late Saturday, according to the department.

Investigating the 'suspicious start' of the fire

The fire's cause was deemed to be a "suspicious start," according to the Los Angeles Fire Department. Investigators are working with the LAPD and the Los Angeles County Sheriff's Department (LASD) to identify a suspect and determine the cause, Ortiz said.

This is a different person from a one who was briefly detained Saturday night and then released, according to Scott.

"During the course of the investigation, LAFD Arson Investigators and LAPD have aggressively tracked down any and all potential leads," LAFD said in a statement Sunday night. "We did have one individual who was detained and released. However, we now have a 2nd individual that is being questioned. The active investigation into the cause of the Palisades fire continues."