Mandates and testing among Biden's plans to combat Delta surge 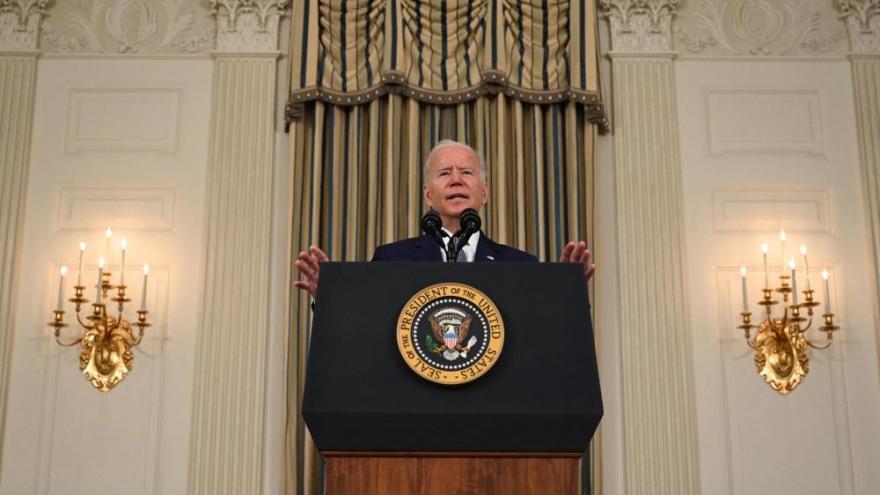 (CNN) -- President Joe Biden, entering autumn with coronavirus still wreaking havoc on the nation's health and economy, will push for vaccine mandates and testing programs as part of a revamped approach to ending the pandemic.

The six-pronged plan Biden is set to unveil Thursday afternoon was still being finalized by the President and members of his public health team. He is due to receive a briefing in the Oval Office on Wednesday afternoon from his Covid-19 response team.

Officials said they hope the new approach will provide Americans a clearer view of how the pandemic will end after 18 months of Covid-dampened life. The White House has watched as the President's approval ratings on Covid have slipped, and feel part of the problem is the backward motion felt this summer: a spike in cases led to a return to masks and continued working from home.

An ABC News/Washington Post poll conducted at the end of August found 52% of respondents approve of how Biden is handling the pandemic, a 10-point drop from June. Still, more respondents said they approved of his handling of Covid than disapproved.

At the same time, Biden's overall approval has slipped into negative territory amid a chaotic withdrawal from Afghanistan and a slow economic recovery. The President's aides view combating the pandemic as the single most important issue of his presidency, and the one that will determine his political fate.

Part of the goal of Thursday's speech is describing the path forward out of the pandemic, which officials felt has become obscured by the Delta variant-fueled surge. The strategy he was preparing to unveil is meant to combat the spread of the highly contagious variant, and will put particular emphasis on schools and private-sector businesses, according to people familiar with the matter.

As American students return to classrooms, battles over masks and vaccine requirements for older children have erupted in school districts around the country. Health officials say they expect vaccines to be authorized for children under 12 in the next several months, but parents have become frustrated at the pace with which the process is unfolding.

Biden has identified schools as a key area of focus, given the broader effect that having children in classrooms has on the economy, particularly for women.

The President also plans to address vaccine requirements for public-sector employees. He has already required federal workers to attest to being vaccinated or be subject to stringent mitigation requirements, and some corners of the government -- including the military and health care workers -- have required the vaccine.

The President also ordered all nursing homes to require their staff be vaccinated against Covid-19 in order to continue receiving Medicare and Medicaid funding.

The crafting of the next steps has been led by Biden's coronavirus team. There are still certain limitations on what the administration can do, and the White House still believes the federal government cannot order a broad mandate on vaccinations for the American public.

"We've seen that there are a range of ways" to increase vaccinations, press secretary Jen Psaki told reporters on Tuesday. "One of them is private sector companies mandating, in different capacities, that their employees get vaccinated, or certain school districts mandate. Another is certainly fear of the Delta variant. And we need to continue to take more steps to make sure school districts are prepared and make sure communities across the country are prepared."

While Biden has encouraged businesses to require vaccines for workers, officials said they believe there is more the private sector can do to encourage people to get the shot. That includes requiring proof of vaccination at restaurants, bars and other venues. Administration officials have been working over the past few weeks to determine ways the government could make it easier for businesses to apply those requirements.

The White House has repeatedly said there won't be a federally mandated vaccine passport, but has been pushing other ways to increase vaccination rates.

At the same time, the administration is preparing to roll out booster shots for Americans who have already received vaccines, though the date at which the third shots will begin has been unclear.

The Biden administration had initially said last month that a third dose of the Covid-19 vaccine would be made available for adults on September 20. But top health officials warned the White House they may need more time to review all the necessary data before they can recommend booster shots. The US Food and Drug Administration is set to meet September 17 to discuss Covid-19 booster shots.