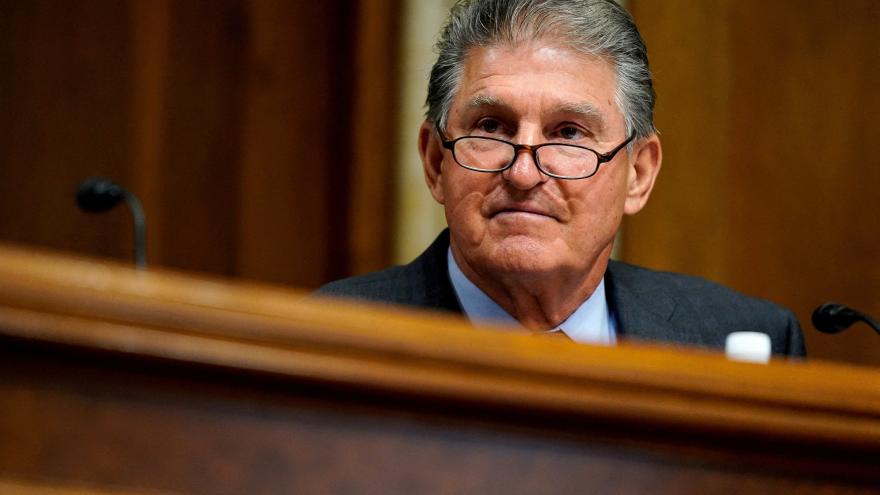 (CNN) -- Democratic Sen. Joe Manchin argued Sunday that Republicans would in "normal times" support an energy and health care bill he recently negotiated with leaders of his party, saying the major piece of legislation addresses key areas the GOP has long championed.

Manchin said the bill he negotiated with Senate Majority Leader Chuck Schumer is not "inflammatory" despite some reports promoted by Republicans that show it could add to inflation and raise taxes.

"Well, we found that they were wrong. And people can be wrong, but how in the world can it be inflammatory?" Manchin told Tapper. "How can it add flames to inflation fires right now if you're paying down debt?"

He added: "We're doing everything we can to make sure we attack the problem. And these are solutions to the problems we have. So I know the ones playing politics with it."

When Manchin and Schumer, a New York Democrat, announced the deal last week, it represented a breakthrough after more than a year of negotiations that have collapsed time and again.

Though many details have not been disclosed, the measure would invest $369 billion into energy and climate change programs, with the goal of reducing carbon emissions by 40% by 2030, according to a one-page fact sheet. It would also address the permitting of energy infrastructure, which could ease the path for a shale gas pipeline in West Virginia.

Manchin on Sunday was asked about getting fellow moderate Democratic Sen. Kyrsten Sinema's support for the legislation.

"Sen. Sinema is my dear friend. We work very close together on so many things, and she has so much in this piece of legislation. She's formed quite a bit of and worked on it very hard. And with that, she's brought down drug prices, she's been very instrumental in letting Medicare go ahead and negotiate for lower drug prices," Manchin said of the Arizona senator.

He added: "I think that basically when she looks at the bill and sees the whole spectrum of what we're doing ... hopefully she will be positive about it, but she'll make her decision and I respect that."

Manchin also defended a provision in the bill that would impose a 15% minimum tax on certain corporations.

"People should be paying their fair share, especially the largest corporations in America that have a billion dollars of value or greater. Can't they pay at least 15%, so that we can move forward and be the leader of the world and the superpower that we are?" he told Tapper, adding that the bill "was not putting a burden on any taxpayers whatsoever."

Republicans on the Senate Finance Committee on Saturday released data from the nonpartisan Joint Committee on Taxation that showed that Americans of all incomes would see their federal taxes rise under the climate and health care package. That analysis, however, looked at the indirect effect of the 15% minimum tax provision on corporations. Economists assume companies would then pass along part of their tax increase to employees by reducing their after-tax wages and job opportunities. Also, shareholders would take a hit since the value of their stock holdings, including those held in pensions and mutual funds, would likely decline.

Manchin said Sunday he hopes the legislation passes before the August recess, which is what Democratic leadership is hoping for.

The senator's support is notable given his stance earlier this month that he "unequivocally" wouldn't support the climate or tax provisions of the Democratic economic package, which appeared to torpedo any hope Democrats had of passing legislation to fight climate change in the near future. But he told Tapper on Sunday that he "never did walk away" from negotiations with Schumer.

"I never did walk away, but we reorganized the bill, if you will," he said. "What we had before that, there were things in there that I considered and thought could be considered to be inflammatory. ... Inflation is the greatest challenge we have in our country right now -- around in my state and around the country. So that's what we're fighting."

Republican Sen. Pat Toomey of Pennsylvania slammed the deal in a separate appearance later on "State of the Union," arguing that it would negatively impact the US economy at a critical time.

This story has been updated to include additional information from the interview.