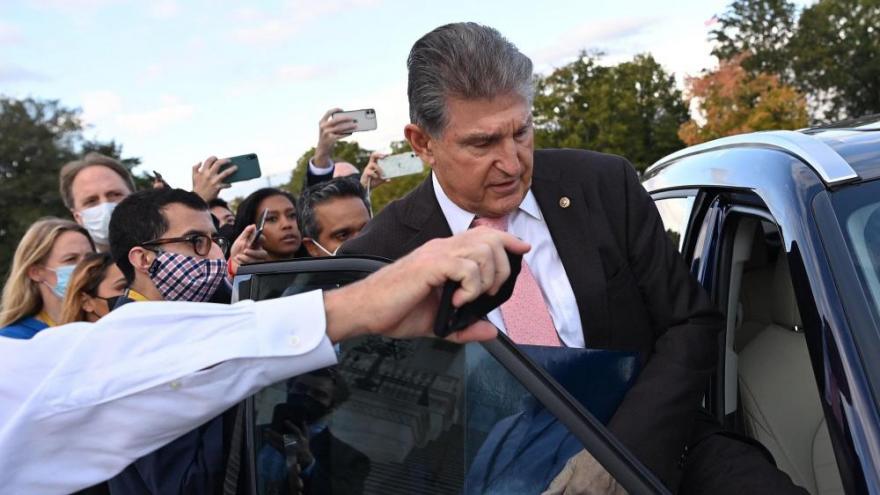 Sen. Joe Manchin said he plans to provide "clarity" later on Monday on where he sees his party's massive economic plan headed. Manchin is shown here after leaving the US Capitol in Washington, DC, on October 28, 2021.

(CNN) -- Sen. Joe Manchin said he won't support the $1.75 trillion social safety net expansion bill Democrats are negotiating until there is "greater clarity" about the impact it will have on the country's national debt and the economy, casting major doubt about whether President Joe Biden can get his agenda through Congress.

At a news conference on Monday afternoon, Manchin laid out fundamental concerns over the approach that Biden and his party are taking in their sweeping agenda. He rejected the party's push to expand social programs and castigated Democrats for using "gimmicks" to hide the true cost of the plan and said far more time is needed to evaluate its economic impact to guard against potential negative consequences.

Despite months of a lobbying campaign by the White House to win over Manchin, including by cutting the price tag in half and making cuts to key programs, the West Virginia moderate's comments indicate that Democrats may never be able to win his support on this proposal.

"I'm open to supporting a final bill that helps move our country forward, but I am equally open to voting against a bill that hurts our country," he said in a warning shot to his party.

The comments come at a critical time for Biden's agenda and are a major blow to party leaders who had been hoping to imminently pass the social safety net plan along with a separate $1 trillion infrastructure bill. Democratic leaders had been trying to pass both measures, which are key to Biden's agenda, as soon as this week.

Manchin has been noncommittal about the social spending package since Biden released a framework, but has expressed concerns about a number of proposals, including an expansion of Medicare.

On Monday, Manchin harshly criticized the plan over how it would be paid for and its cost.

"As more of the real details outlined in the basic framework are released, what I see are shell games and budget gimmicks that make the real cost of this so-called $1.75 trillion dollar bill estimated to be twice as high if the programs are extended or made permanent," he said.

He also lambasted his colleagues for pushing forward a bill that could increase the national debt.

"Simply put, I will not support a bill that is this consequential without thoroughly understanding the impact that it will have on our national debt, our economy and most importantly all of our American people," he said.

Later, he said, "To be clear, I will not support the reconciliation legislation without knowing how the bill would impact our debt and our economy and our country. We won't know that until we work through the text."

Party leaders have been pushing to pass a $1 trillion bipartisan infrastructure bill in the House, but progressives have so far held that up by demanding a concurrent vote on the larger, but not yet finalized, social safety net plan.

Manchin on Monday called on the House of Representatives to pass the bipartisan infrastructure bill and warned, in an implicit rebuke to progressives, that "holding this bill hostage" won't work in getting him to support the larger social spending and economic package.

"For the sake of the country, I urge the House to vote and pass the bipartisan infrastructure bill -- holding this bill hostage is not going to work in getting my support for the reconciliation bill," he said.

"I for one won't support a multi-trillion dollar bill without greater clarity about why Congress chooses to ignore the serious effects of inflation and debt that have on our economy and existing government programs," he said.

Why Manchin spoke out

Manchin had been frustrated that Hill Democrats were trying to get him to make a full-throated endorsement of the $1.75 trillion plan — and he wanted to make clear where he stood as he was getting lobbied to back adding even more social programs to the plan, according to a source familiar with his thinking.

He also had grown angry that progressives thought they had leverage over him to back the plan if they withheld their support for the $1.2 trillion infrastructure bill, the source said.

Manchin, the source said, also didn't like last-minute changes being made to the social safety net spending proposal.

In short, he didn't want to get jammed into supporting something he was far from ready to endorse.

In a statement, the White House says it remains confident Biden's spending plan will gain Manchin's support after he cast doubt on his intentions in a press conference.

"The plan the House is finalizing meets those tests—it is fully paid for, will reduce the deficit, and brings down costs for health care, child care, elder care, and housing," press secretary Jen Psaki wrote. "Experts agree: Seventeen Nobel Prize-winning economists have said it will reduce inflation. As a result, we remain confident that the plan will gain Senator Manchin's support."

Rep. Pramila Jayapal, the chairwoman of the Congressional Progressive Caucus, sounded confident that President Biden will be able to broker a deal when asked to respond to Manchin's criticism of the social safety net plan in an interview on CNN's "Newsroom."

"I'm letting the President have those conversations. The President came to the caucus and he assured us that he would get 51 votes in the Senate for this deal that he has been negotiating with Senator Manchin and Senator Sinema," she said.

"We trust the President that he will get 51 votes for this," she said.

Jayapal sounded optimistic that the House can still pass both the infrastructure bill and the larger social safety net bill as soon as this week.

"I'm hoping that can happen as soon as tomorrow or the next day," she said. "We are ready to get this transformational change to people."

House Democratic leaders are considering putting the social spending and infrastructure bills on the floor as soon as Wednesday night or Thursday for the final votes, according to a person with knowledge of the matter. Although there is still a possibility that timing could slip.

Democrats plan to pass the plan using a process known as budget reconciliation that would allow them to approve the measure in the Senate without any GOP votes. But that means they would need all 50 members of the Senate Democratic caucus to vote for it. That dynamic has given Manchin as well as another key moderate Sen. Kyrsten Sinema of Arizona, outsized influence in the process.

The plan would represent a massive investment in key liberal priorities and a significant expansion of the social safety net. It would focus on expanding access to health care, addressing the climate crisis and increasing aid to families among a number of provisions, and stands as a centerpiece of the President's domestic agenda.