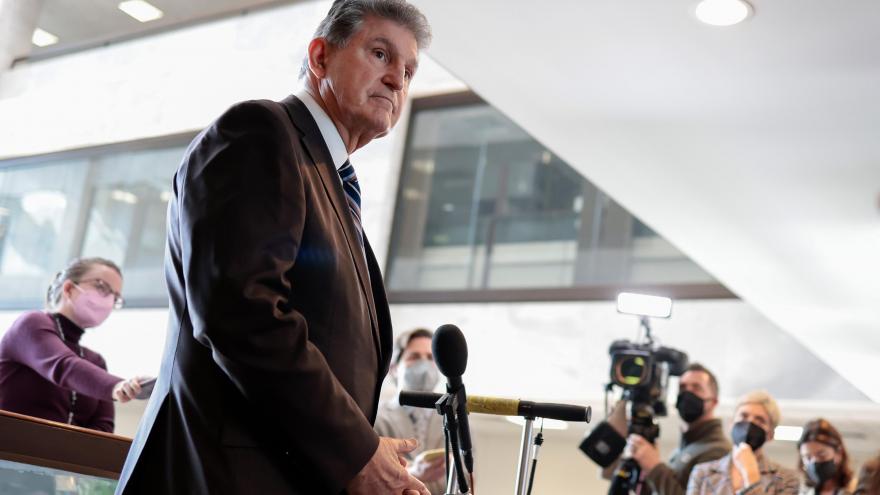 (CNN) -- West Virginia Democratic Sen. Joe Manchin announced on Friday that he plans to vote for President Joe Biden's Supreme Court nominee Ketanji Brown Jackson, a move that all but guarantees she will be confirmed.

In a statement outlining his decision, Manchin said, "I met with Judge Jackson and evaluated her qualifications to be a Supreme Court Justice. After meeting with her, considering her record, and closely monitoring her testimony and questioning before the Senate Judiciary Committee this week, I have determined I intend to vote for her nomination to serve on the Supreme Court."

Manchin's announcement is notable since he is a closely-watched moderate Democrat and key swing vote in the Senate. His decision to vote "yes" helps solidify the vote math for Senate Democrats to confirm the nominee.

Senate Democrats are hoping to move swiftly to a confirmation vote by the full Senate by early next month. They can confirm Jackson to the Supreme Court without Republican support if every member of their caucus votes in favor, which appears on track to happen, and Vice President Kamala Harris breaks a tie. It is not yet clear if Jackson will win any Republican votes.

Jackson appeared before the committee for high-profile confirmation hearings this week, which featured intense questioning by Senate Republicans.

So far, no Democrats have publicly signaled they would vote against the nominee, even as Republicans have worked to unleash potentially politically damaging attacks such as accusations that Jackson is soft on crime, a charge the nominee and many Democrats have pushed back on.

While Republicans have attacked the nominee's record this week, Democrats have praised her credentials and experience, describing her as exceptionally qualified. Democrats have also consistently emphasized the historic nature of Jackson's nomination. If confirmed, Jackson would be the first Black woman to serve as a Supreme Court justice.

When the Senate voted to confirm Jackson last year to fill a vacancy on a powerful DC-based appellate court, three Republican senators voted with Democrats in favor: Sens. Lindsey Graham of South Carolina, Susan Collins of Maine and Lisa Murkowski of Alaska. As a result, those three Republicans have been closely watched this week.

Collins and Murkowski are not on the Senate Judiciary Committee, so they did not have a chance to question the nominee during the hearings.

But Graham is a member of the panel. The South Carolina Republican directed fierce, and highly critical, lines of questioning toward the nominee as he appears to be signaling he will not support her nomination.

Graham told CNN earlier this week it's "fair to say" he sees red flags with the nomination.

And Republican Sen. Ben Sasse of Nebraska, who was one of the more respectful Republicans to Jackson, said Friday night that he will vote against confirmation, which means the Senate Judiciary Committee is likely to deadlock 11-11. The nomination would still advance to the floor if there were a tie vote.