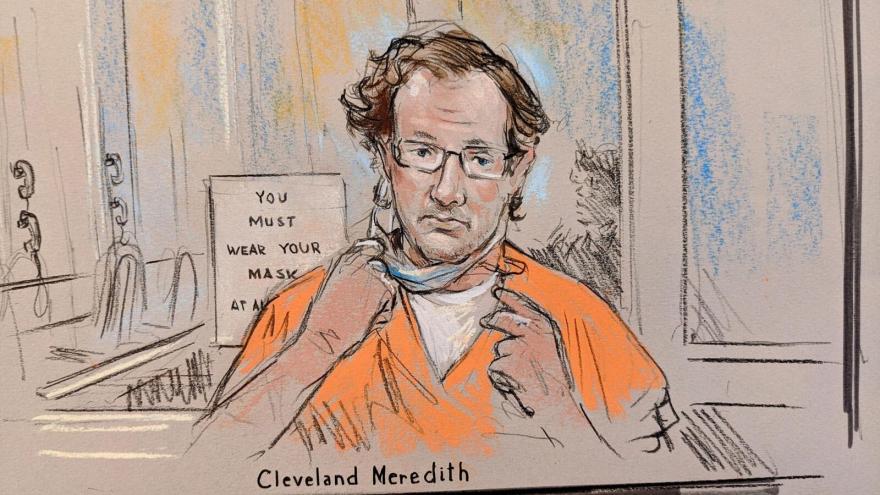 (CNN) -- A Georgia man who drove cross-country with an assault rifle and threatened to kill House Speaker Nancy Pelosi was sentenced to 28 months behind bars in an emotional hearing on Tuesday.

Cleveland Meredith Jr. pleaded guilty in September to sending threatening communications. Though he missed the January 6 rally because of car troubles, Meredith was one of the first people charged in relation to the Capitol riot after his mother reported concerning texts to the FBI on January 7. Agents found Meredith in a hotel one mile from the Capitol with thousands of rounds of ammunition, a handgun and an assault rifle stashed in his trailer.

"Let the record be crystal clear that it is not patriotism, it is not justified to descend on the Capitol at the behest of a candidate who lost an election and terrorize others," Judge Amy Berman Jackson said, calling the riot the "definition of tyranny."

She added, "Canceling the votes of others at the point of a gun is the antithesis of what this country stands for."

He will get credit for the 11 months he has already spent behind bars.

Meredith is one of several Capitol riot defendants who hurled threats at lawmakers, but only the second to be sentenced to related charges.

Many of these defendants -- including Meredith -- believed in the QAnon conspiracy theory and false claims of election fraud that are still a driving force behind violent rhetoric, even towards the judges who are overseeing the hundreds of January 6 cases as they make their way through the justice system.

According to the plea agreement, Meredith texted a friend the day after the riot that he was thinking of attending an event with Pelosi and "putting a bullet in her noggin on Live TV." In other messages, Meredith said he might shoot the mayor of DC, that he was "ready to remove several craniums from shoulders," and that he would rather die than go to jail.

"I predict that within the next 12 days, many in our country will die," Meredith wrote.

When a relative confronted him about the texts, Meredith said that he was "jus havin fun" and was "locked in my hotel room...high."

"I was out of control that day and I apologize to speaker Pelosi if I scared her," Meredith said. He vowed to go to therapy when he gets out of jail, and said that he is "done with politics."

Both of Meredith's parents and two close friends spoke on his behalf during the hearing, testifying about the man he once was and how he was radicalized by his descent into QAnon.

Tyler Dixon, a family friend, said that the first time he heard of QAnon was when Meredith visited his house in 2018. Meredith was spouting theories Dixon said he didn't understand at the time, and said that he "just wanted to be loved."

"I wish I had known more of the details of what was going on," Dixon said through tears. "I could've helped. I should've called more. He needs to disengage."

Meredith's father, Cleveland Meredith Sr., said that his son fell for QAnon "hook, line and sinker" and that if he could "get out of that mess it's going to make a world of difference."

Meredith's mother said that it was an "intervention of god" that he was not able to make it to the rally on time, and that the reason she reported him to the FBI is because she "thought we were saving someone's life."

But Jackson said that Meredith's family had a "selective and distorted" view of his decades long struggle with mental health, and sited concerns dating back to 2007.

Jackson also lamented that lies of an illegitimate election -- lies which Meredith believed -- were still being perpetrated and amplified, and that it is considered "heresy" in the Republican party to say otherwise.

"The bounds of decency and the bounds of the law have not changed one bit and they need to be enforced," she said.