Man set to plead guilty after largest-known seizure of meth-laced Adderall pills in the US, authorities say 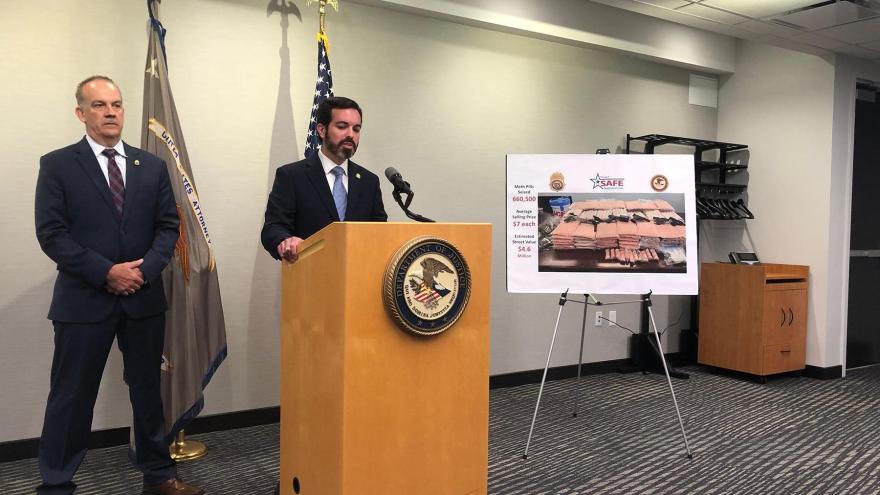 Authorities announced on September 19 one of the largest seizures in the nation of counterfeit Adderall pills laced with methamphetamine.

(CNN) -- A Rhode Island man is set to plead guilty in what is being called the largest known seizure of counterfeit meth-laced Adderall pills in the US, authorities said Monday.

The significant seizure comes as federal authorities continue to warn of an "alarming increase" in the lethality and availability of fake prescription pills laced with fentanyl and meth in the US. Counterfeit pills made to look like prescription opioids -- like Xanax or Adderall -- but contain potentially fatal doses of fentanyl or meth are being found in every state, according to the US Drug Enforcement Administration.

Dylan Rodas, 27, was arrested in March after investigators found 660,500 of the meth-laced pills -- together weighing about 660 pounds -- in his basement, court documents say.

"The quantity of methamphetamine represented by this seizure -- methamphetamine that was packaged and ready to flow out onto the street, to devastating effect in our communities -- is staggering," US Attorney for the District of Rhode Island Zachary Cunha said at a press conference Monday.

Rodas has agreed to plead guilty to possession with intent to distribute 500 grams or more of methamphetamine in connection with the seizure, Cunha announced.

In addition to being the largest seizure of counterfeit Adderall pills in the US, the bust is also among the largest single meth seizures by the DEA's New England Field Division, according to the U.S. Attorney.

The discovery was made after a source working with the DEA identified Rodas as a supplier of the meth-laced pills in the area, according to court documents.

The confidential source bought pills from the defendant while DEA agents were listening, the documents said.

Agents served search warrants at Rodas's Cumberland home, where they found a basement workspace used to produce the counterfeit pills, machine pill presses, thousands of pills, as well as an assortment of other drugs and firearms, the U.S. Attorney said.

The charge — intent to distribute 500 grams or more of methamphetamine — is subject to a mandatory minimum penalty of 10 years imprisonment, Cunha said in a separate statement Monday. If Rodas accepts, he will serve at least those 10 years in federal prison, the state's attorney said.

CNN has reached out to Rodas' attorney for comment.

Fake pills, marketed as legitimate prescription pills, are easy to purchase and widely available in the US, according to the DEA. Around 20.4 counterfeit pills were seized nationwide in 2021, according to the agency.

DEA lab testing has found that four out of every 10 pills with fentanyl contain a potentially lethal dose, and the agency and local law enforcement agencies have been seizing deadly fake pills at record rates, the DEA said.

In the past year, 100,000 Americans died of a drug overdose, Cunha said. Of those deaths, 64% were from opioids and 28% were from psychostimulants, predominantly meth, he said.

"For a long time, we here in New England have been spared the full impact of methamphetamine, a drug that has blighted lives in so many other communities across the country," Cunha said. "Those days, I regret to say, are over, with meth increasingly making its presence felt in Rhode Island and across the Northeast."