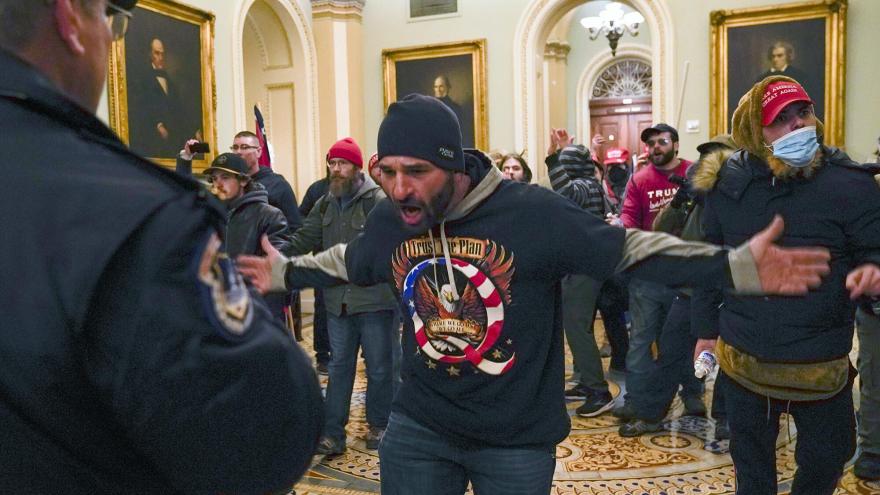 Trump supporters gesture to US Capitol Police in the hallway outside of the Senate chamber at the Capitol in Washington on January 6, 2021.

(CNN) -- The man seen chasing a Black Capitol Police officer up the stairs during Wednesday's insurrection and riot is Doug Jensen, according to a CNN comparative analysis of his booking photo and posts on social media. Jensen is one of the individuals now facing federal charges.

On a Twitter account bearing his name, Jensen twice identified himself in one of the pictures that was circulating online after the riot and insurrection.

His neighbor in Des Moines, Iowa, also confirmed to CNN affiliate KCCI that the man in the photos was Jensen.

In the video captured by the Huffington Post's Igor Bobic, Jensen -- wearing the same QAnon t-shirt -- is seen chasing the unidentified officer with a mob of rioters following him. Once at the top of a set of stairs, the officer glances toward a doorway to his left that leads to the Senate floor and moves away from it and toward the camera, steering the mob away from the Senate floor.

Jensen posted on Twitter on November 12 that he was "ready for 4 more years" and "will do whatever it takes."

Jensen, 41, was arrested for his involvement in a violent crowd breaking into the Capitol, according to the FBI and local authorities in Iowa. Local authorities were not called to assist with the arrest and FBI officials presented Jensen to Polk County Jail for processing on Saturday. He was booked into the jail at approximately 1 a.m. Central Time.

According to the FBI and the Polk County Sheriff's Office, Jensen faces five federal charges -- of unlawfully entering the Capitol, disrupting government business, violent entry, parading in a Capitol building and blocking law enforcement during the riot.

CNN also reached out to the Polk County Jail to try to contact a lawyer for Jensen, and they deferred to federal officials. No further information about Jensen's case was available at the time of publication from the Justice Department.

KCCI went onto report that Jensen has since been let go from his job at Forrest & Associate Masonry. Company President and CEO Richard Felice told the station the company does not agree with Jensen's actions.