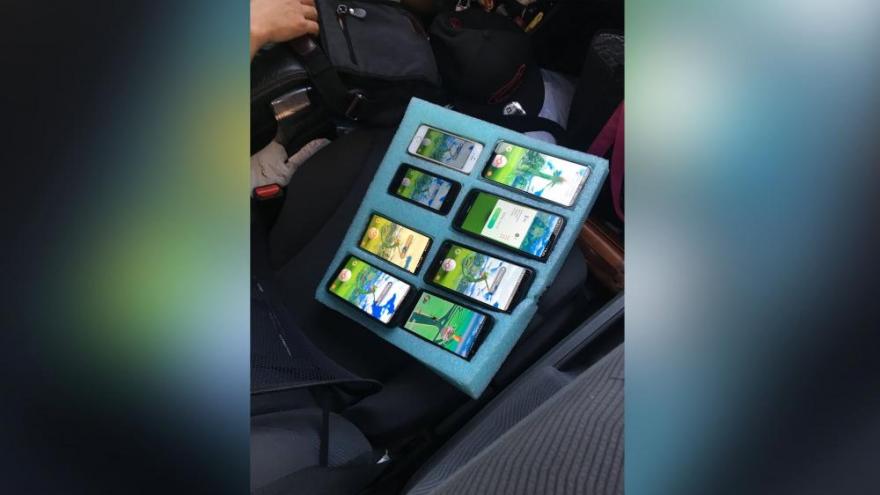 A Pokémon Go player had to have a chat with law enforcement for taking the game's "Gotta catch 'em all" motto a little too seriously.

(CNN) -- A Pokémon Go player had to have a chat with law enforcement for taking the game's "Gotta catch 'em all" motto a little too seriously.

The driver was parked on the shoulder of the road and playing the game on eight phones, according to a tweet by Washington State Patrol Public Information Officer Rick Johnson.

When Sgt. Kyle Smith went to find out what was going on, he saw the phones in a holder made of blue foam that had holes cut for each device, as a photo shows in Johnson's tweet.

The incident occurred Tuesday night on State Route 518 near Sea-Tac Airport, according to CNN affiliate KOMO.

The man didn't get a ticket for distracted driving, Johnson tweeted, because the sergeant didn't observe him playing while he was driving.

The driver agreed to put the phones in the back seat and the sergeant warned him not to pull over on the shoulder unless it's an emergency.

"It was an emergency! Do you not see 6 open Rayquaza catch screens?" one fan tweeted in response (CNN did not independently confirm the type of Pokémon in the photo).

Another replied that he hopes the player got Pika-chewed out.

Pokémon Go maker Niantic has a form for people to report game locations they think should be moved or modified.