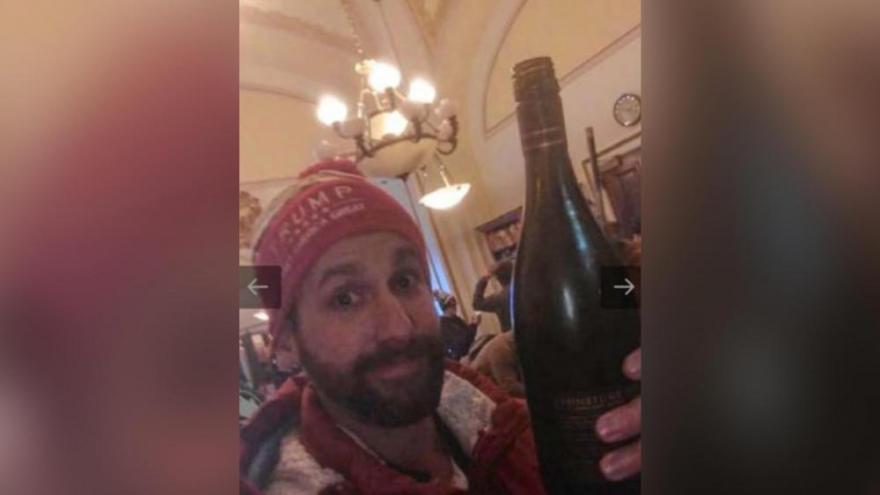 Jason Riddle, who drank a bottle of wine and stole a book on Senate procedure during the January 6, 2021 attack on the US Capitol, was sentenced on April 4 to serve 90 days in jail.

(CNN) -- A Navy veteran and possible congressional candidate who drank a bottle of wine and stole a book on Senate procedure during the January 6, 2021, attack on the US Capitol was sentenced on Monday to serve 90 days in jail.

Jason Riddle of New Hampshire had pleaded guilty to theft of government property and illegally protesting inside the Capitol -- both misdemeanors. Riddle was also sentenced to three years of probation and will pay more than $750 in restitution for the stolen book and damage done to the building during the riot.

"He was witnessing violence in front of him while he was chugging wine and celebrating," said Judge Dabney Friedrich as she handed down the sentence. "It is hard to fathom, given Mr. Riddle's foreign military service and time in the Navy reserves" that he would "celebrate this attack."

Riddle is the most recent rioter accused of stealing something from inside the Capitol to be sentenced. Robert Petrosh, who was convicted of stealing two microphones off of House Speaker Nancy Pelosi's lectern, was sentenced in March to 10 days in jail. Adam Johnson, who was photographed carrying the lectern, was sentenced to 75 days in jail in February (Johnson was initially charged with theft but pleaded guilty to other charges).

According to his plea agreement, Riddle was among the second wave of rioters to enter the Capitol. Once inside, he entered the Senate parliamentarian's office and drank a bottle of wine he found. Riddle then grabbed a red leather book entitled "Senate Procedure" and a small Fox News football from the office and left the building.

Once outside, Riddle tossed the football and later sold the book for $40.

After the riot, Riddle told NBC that he didn't regret his actions and floated a run for public office, saying that his participation in the riot tells people "I show up. I'm going to actually keep my promises and make some changes."

"I'm not sure what Mr. Riddle meant by that, but rest assured these actions are not fitted to any American, let alone any person elected to office," Friedrich said during the hearing.

In a speech to the court, Riddle railed against people, including lawmakers, who say that "everybody who participated in the riot were domestic terrorists." Riddle also called out members of the media, including Late Night host Stephen Colbert, who Riddle claimed "called me an enemy of the state to a booing crowd."

"That's what's in my head when I signed up to run for Congress," Riddle told Friedrich. "These are citizens of the United States and their rights are under attack."

"Do you feel that you are under attack with this prosecution?" Friedrich asked after Riddle finished his statement.