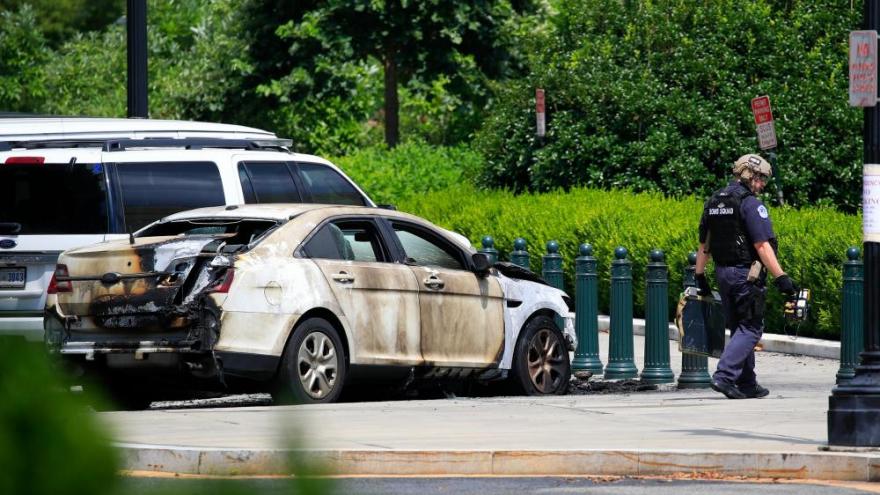 A bomb technician walks past an automobile that was set on fire near the Supreme Court building in Washington on Wednesday, July 15.

The man poured on an accelerant and set fire to the car, which was parked just outside the court building, the office said. He was then taken by ambulance for treatment of his injuries.

"An individual poured an accelerant on and set on fire an unmarked Supreme Court police vehicle parked on Maryland Ave. near First Street, NE. The car was totally burned and an adjacent Court vehicle was also damaged," said Kathy Arberg, the court's public information officer, in a statement to CNN. "The individual suffered burns in the process. He was taken into custody by Supreme Court Police and was transported by ambulance for treatment of his injuries."

The court is not in session this week, after wrapping up its term last Thursday. In recent days, however, the justices have weighed in on several death penalty cases, issuing an overnight ruling earlier this week that a federal execution -- the first in 17 years -- could proceed.

It's unclear if the justices have been working inside the building in recent months. As the nation has grappled with the coronavirus pandemic, oral arguments, which have traditionally drawn crowds both inside and outside the court, were transferred to the airwaves. Though the building remains open for official business, it is closed to the public.

The incident outside the court came the same day that Justice Ruth Bader Ginsburg was discharged from the hospital after being treated for a possible infection in her latest health scare.