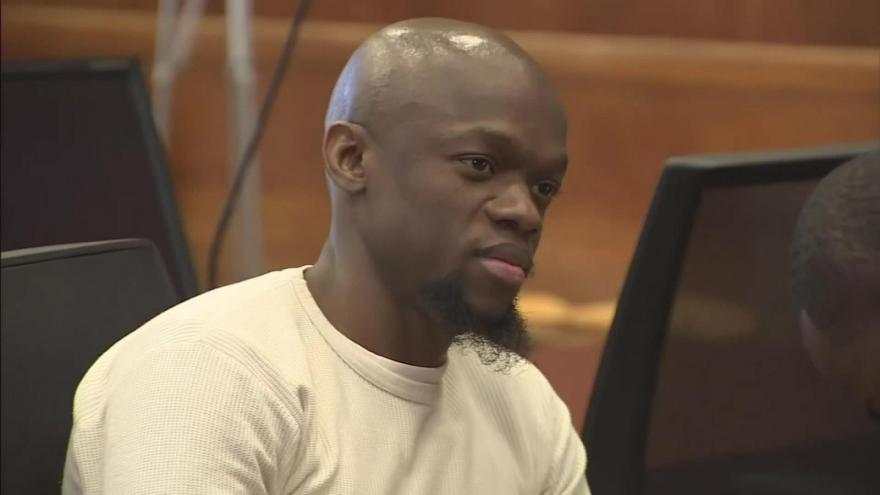 A jury found Bampumim Teixeira, 33, guilty of first-degree felony murder in the slayings of Lina Bolanos and her fiancé Richard Field found lying in pools of blood in their Boston penthouse in May 2017.

(CNN) -- A jury on Tuesday found Bampumim Teixeira guilty of first-degree felony murder in the slayings of two doctors found lying in pools of blood in their Boston penthouse in May 2017.

Teixeira, a 33-year-old who had worked as a concierge in the building, was convicted of fatally stabbing 39-year-old Lina Bolanos and her 48-year-old fiancé Richard Field, both well-known anesthesiologists. He was also found guilty of armed robbery, kidnapping and home invasion.

The case stood out for its startling gore and unclear motive. Both doctors had been beaten and their hands had been bound, according to trial testimony. The words "payback" and "he killed my wife" were scrawled on the wall in large letters, and officers found photos that were crossed out and marked, a detective testified.

Prosecutors questioned nearly 30 witnesses during the trial, including family and friends of the doctors, first responders and investigators. Teixeira's defense did not present any evidence but challenged the credibility and accuracy of the police investigation.

Teixeira claimed in an interview with police after the killings that he'd been in a relationship with Bolanos, that Field killed Bolanos in a rage after finding her with Teixeira and that Teixeira killed Field in self-defense.

"We've gone beyond the preposterous. We're now existing in the theater of the absurd," said Assistant District Attorney John Pappas.

Twice on Tuesday, Teixeira was forcibly removed from the courtroom because of vocal outbursts. On Tuesday morning, he threatened Pappas and his family, which could lead to additional charges against him. He was also removed from court prior to the verdict after yelling about the victim's last words.

His sentencing is scheduled for December 13.

Teixeira was arrested in building hallway

Both Bolanos and Field tried desperately to get help before they were killed. They called 911 multiple times, but the calls were cut short or inaudible, and texted friends short messages to call the police, according to trial testimony.

One concerned friend alerted a building concierge, who then contacted police. Police shot Teixeira in a "violent struggle" in a hallway of the building and then arrested him, police said.

Teixeira told the officers there were dead bodies in the penthouse, a Boston police detective testified. Police found a backpack with a replica firearm and jewelry nearby, the district attorney said.

When Teixeira was questioned in the hospital the next day, he told police he had a brief affair with Bolanos, and that he watched as Field stabbed his fiancee in rage. He said the doctor threatened to kill him.

Bolanos was found with 24 stab wounds, including some that fatally severed her jugular vein, and injuries to her head and face, according to a medical examiner. Field was killed by a stab wound that severed his carotid artery, the medical examiner said at the trial.

Teixeira grew up in Guinea-Bissau and then moved to Cape Verde to study psychology at Jean Piaget University. He moved to Boston in 2010 to live with his adoptive mother, but after a year in the US, he abruptly severed the relationship, Maria Luisa Teixeira told CNN in 2017.