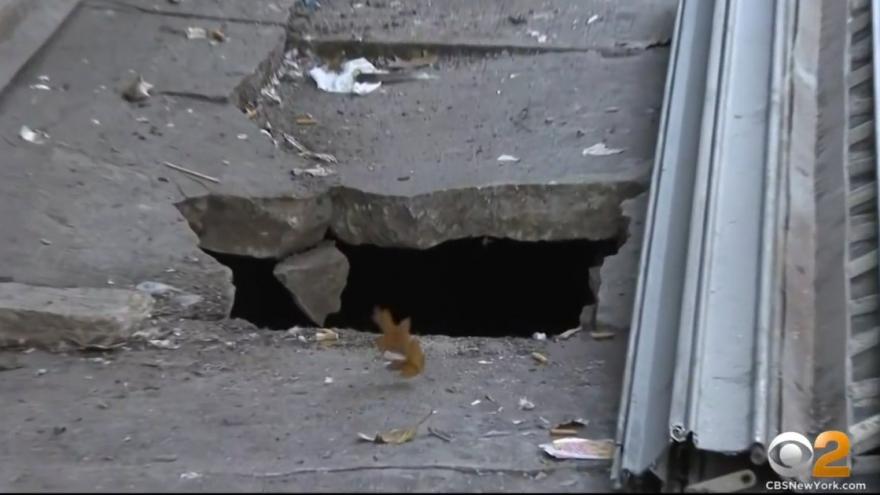 New York, NY (WCBS) -- The city’s Department of Buildings is investigating after witnesses in the Bronx say a man fell into a hole after the sidewalk he was standing on suddenly gave way.

The FDNY says the fall happened around 12:30 p.m. Saturday in front of 4521 Third Avenue in the Belmont section.

Witnesses say the 33-year-old victim fell into a 12-15 foot hole after a section of sidewalk collapsed underneath him.

One witness told CBS2’s Kiran Dhillon he was waiting for the bus next to the victim and gave him a lighter. He turned around for a second and the man was gone.

He says he could see the man in the hole, unable to talk and barely moving.

Witnesses say firefighters worked for about 30 minutes to rescue the man.

Crews eventually went into a side entrance of the building to access the cellar to rescue the victim.

“When they brought the guy out of the building, the guy had a bandage around his face, and his arm looked like it was broken and stuff like that. Hopefully he’s OK,” one witness said.

Police say the victim was taken across the street to St. Barnabas Hospital in stable condition. He suffered minor head injuries.

The Department of Buildings says preliminary findings show the collapse was caused by a section of sidewalk over a building’s cellar that was in a state of disrepair.

As a result, the DOB says inspectors issued a full vacate order for the five-story building.

Meanwhile, people who work in that building say several sidewalks in the area are in a similar state. They’re now worried for their safety.

“You never really think about it when you’re walking around, there’s just holes around the streets,” said Aliaortha Vega, who works next door.

In the meantime, the hole in the sidewalk has been covered, and the DOB says the building’s owner has been ordered to install a construction fence in front of the property to protect the public.