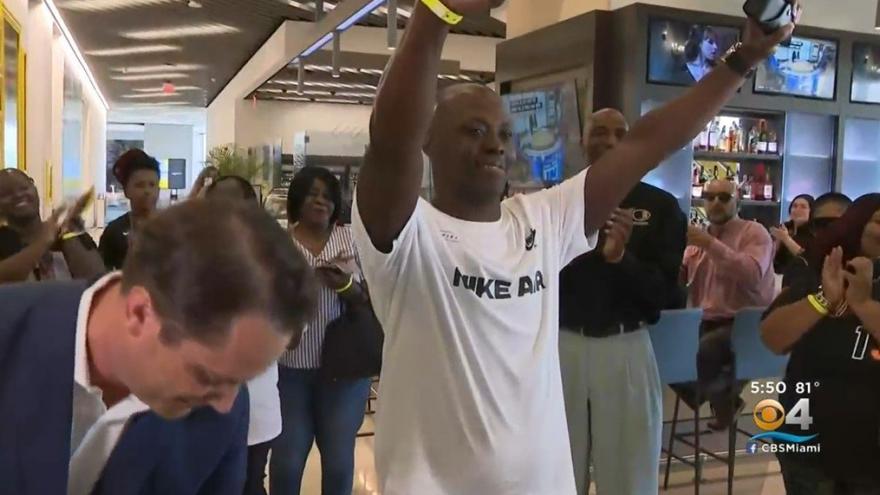 MIAMI (WFOR) -- Thomas James, who was recently exonerated after spending 30 years behind bars, received a huge welcome at the Miami Brightline station on Wednesday.

Dozens of employees cheered as he walked in. He spent all that time in prison for a murder he did not commit. He said he’s overwhelmed.

“For me, it’s an honor and a pleasure to be able to stand right here today,” he told the cheering crowd.

After being released from prison last week, James said he wanted to ride the Brightline. Now, he can ride whenever he wants, they gave him a free pass and on this ride and he was even an honorary conductor.

“The second we heard your story we were all moved and we thought we got to do something for you and your family,” said Brightline’s Ben Porritt. “It’s a small thing but we just wanted to welcome you to our home,” he said.

It’s an odd wish to want to ride the train. He said he heard a lot about it in prison and he knows it can take him where he wants to go.

He, along with family and friends rode the train to Fort Lauderdale. It’s just one of many new things he’s experienced since being released.

“I learned that in the grocery store, superstore, I didn’t’ know they make that much toothpaste,” he commented. “I noticed that most places don’t take much cash no more. Everything has to be with a card,” he said. And when in the car, “Most people don’t even listen to the radio in the car anymore, everybody got their phone attached to their car,” he noticed.

He tells us he still has a lot more to discover, like the art of taking a selfie, he tried it on the train.

The whole group traveling with James will end up at the Heat playoff game tonight. James will be named the Honorary Captain at center court just before tip-off. He’ll also be spotlighted during one of the breaks in the game.