Man discovers shipwreck while walking his dog on the beach 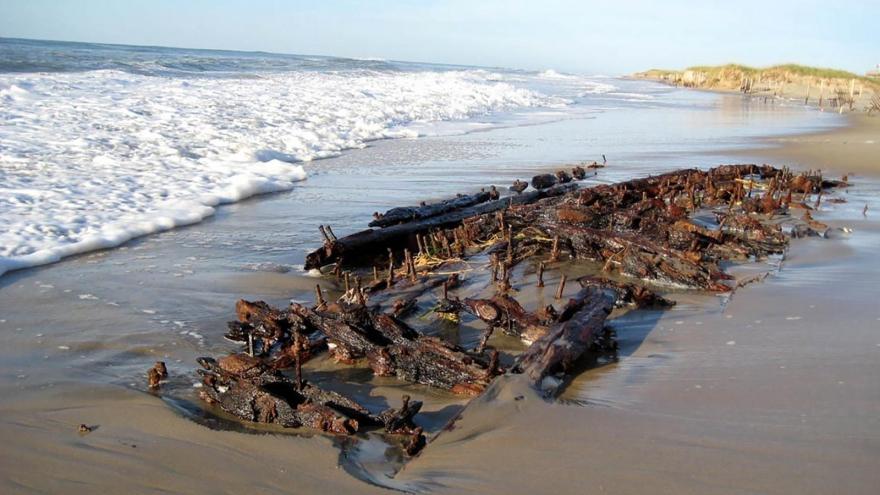 (CNN) -- A recent storm uncovered wreckage from a wooden ship buried on a beach in North Carolina's Outer Banks.

Charlie Hornfeck told CNN that he spotted the wreck on Saturday while walking his dog Kay Dee on the beach in Hatteras, North Carolina. He was looking to see how bad the erosion and other storm damage was near his bar, The Wreck Tiki Bar & Food.

His wife Leslie Hornfeck said he is fascinated by shipwrecks (that's how the bar got its name) and the Outer Banks' notorious reputation as "The Graveyard of the Atlantic."

He'd also worked as a tour guide in the area for years, so he knew what he had found.

He estimated that the exposed wreckage was about 20 feet long.

"A Wreck across the street from The Wreck! A lot of sand has washed out with this Nor'Easter & look what's been exposed!" he wrote in a post of Facebook.

He took some pictures -- and good thing, too, because when he came back the next day, he said the sand had washed back in and re-buried the wreckage.

More than 1,000 ships are believed to have been lost near Cape Hatteras, according to the National Parks Service. The area has shifting sandbars, powerful currents and gets strong storms.

Throw in pirates, Civil War naval battles and German U-Boats during World War II, and it's easy to see how "The Graveyard of the Atlantic" earned its nickname.

A nor'easter swept up the East Coast last week, and there was flooding in Hatteras, Mary Ellen Riddle with the North Carolina Maritime Center's Graveyard of the Atlantic Museum.

"It's not unusual for something to become uncovered when there's that much water going back and forth," she told CNN.

Riddle said she's asked a state archaeologist to see what he could find out about the wreck.