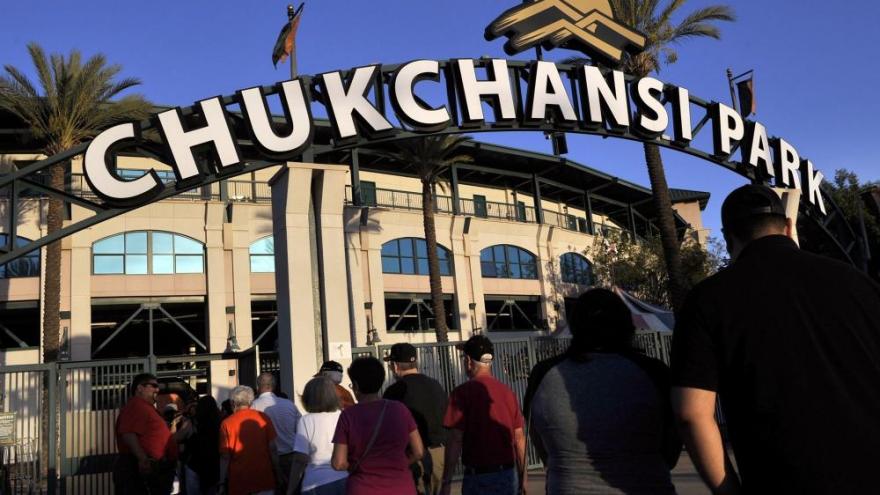 (CNN) -- A man died Tuesday night after participating in a taco eating competition at a minor league baseball game. The competition took place last night at Chukchansi Park in Fresno, California, during a game between the Fresno Grizzlies and Memphis Redbirds.

The man was identified as Dana Hutchings, 41, by the Fresno County Sheriff's department. The team's on-site medical staff and paramedics immediately attended to Hutchings after he collapsed, a spokesperson for the Fresno Grizzlies said in a statement.

He died shortly after being rushed to Community Regional Medical Center in Fresno, authorities said. An autopsy is scheduled for tomorrow.

"We are not ruling a cause of death yet, but we have an idea," the sheriff's department said in a statement.

"We are devastated to learn that the fan that received medical attention following an event at Tuesday evening's game has passed away," Fresno Grizzlies president Derek Franks said in a statement. "The Fresno Grizzlies extend our heartfelt prayers and condolences to the family of Mr. Hutchings. The safety and security of our fans is our highest priority. We will work closely with local authorities and provide any helpful information that is requested."

Chukchansi Park is hosting the World Taco Eating Championship on Saturday, August 17 during the team's annual Taco Truck Throwdown event. While the competition on Saturday is officially sanctioned by Major League Eating, an organization that organizes professional eating competitions, the event last night was not.

As of now, tickets for the competition are still being sold. However, a spokesperson for the Fresno Grizzlies says that the competitive eating portion of their annual Taco Truck Throwdown is being re-evaluated.