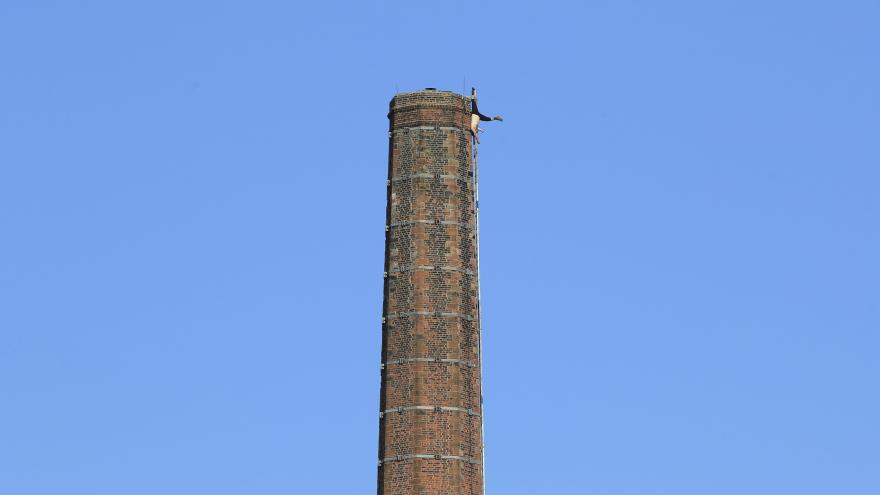 (CNN) -- A man in his 50s died after becoming trapped at the top of a 290-foot industrial chimney in England, police said on Monday.

The unnamed man reportedly was on top of Dixon's Chimney in Carlisle at 2:20 a.m. local time. According to Cumbria Police, he was pronounced dead at 4:45 p.m. after being recovered from the structure.

The police said the rescue operation involved a number of agencies, including Cumbria and Lancashire fire and rescue employees, mountain rescuers and specialist contractors.

Footage on social media appeared to show the man bare-chested and dangling by his legs.

It is not clear how or why the man became stuck on top of the chimney, which is part of a former 19th-century cotton mill.

Police said it deployed drones to assess the scene and tried to use a helicopter to rescue him.

Ultimately, a cherry picker brought in from Glasgow was used to transport technicians and firefighters to the top of the chimney and lower the man down.

"All this was done with the aim of bringing the man down safely and while maintaining the safety of emergency services staff," the police statement read.

"The thoughts of all the emergency services and partners are with the family and friends of the man," the police said, adding that specialist welfare police officers were supporting the man's family.

An investigation into how and why the man was on the chimney has been launched.