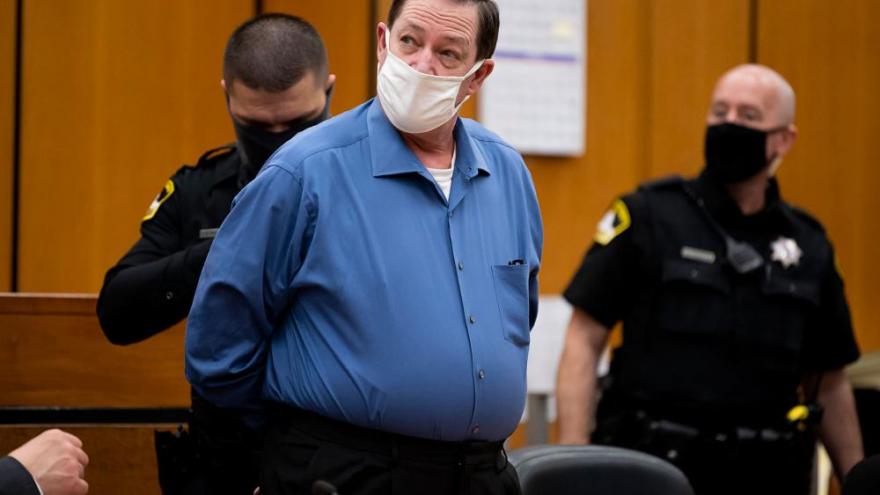 Roy Charles Waller stands in Sacramento Superior Court in Sacramento, California, on November 18, 2020. Waller, accused of being the so-called NorCal Rapist, was found guilty of raping nine women in their homes between 1991 and 2006.

(CNN) -- A Sacramento jury has convicted a man of a string of rapes and kidnappings dating back almost 30 years in what became known as the NorCal Rapist case.

Roy Charles Waller was convicted Wednesday of rapes in Northern California stretching from Rohnert Park to Chico and Sacramento between 1991 and 2006.

Waller was convicted on a total of 46 counts including rape, sodomy and kidnapping.

"Nine victims waited for more than 20 years for this moment and it is only with the use of Investigative Genetic Genealogy and the science of DNA that it has come. This is their day," Deputy District Attorney Steve Grippi said in a statement.

"Justice in this case was a long time in the making. However, law enforcement officers and detectives involved in the investigation never stopped searching for the truth. Through their dogged efforts, and the advent of IGG, that truth has come to fruition."

Waller is set to be sentenced December 18 and could face life in prison. His attorney plans to file an appeal. Detectives arrested Waller in 2018 after being led to him by genetic genealogy.

Genetic genealogy has recently played a key role in many decades-old cold cases, bringing justice to victims and their families after years without leads. Investigators identified Waller using the Florida-based site GEDMatch, which aided in the arrest of the Golden State Killer.

"It didn't matter what I did," Joe Farina, Waller's defense attorney, said. "It was a DNA case. We could not overcome the fact that his DNA was at nearly all the crime scenes."

While his attorney was not at all surprised by the verdict, he told CNN that Waller was.

"He never seemed to understand it was a DNA case. He thought he was going to be acquitted. He denied having anything to do with it."

Waller was arrested in 2018 at his workplace -- the University of California, Berkeley, where he worked as a safety specialist.

And authorities were able to obtain other evidence against him, including handcuffs, zip ties, a ski mask, and duct tape all found in Waller's storage unit.

"He kept everything," said Farina. "He was a pack rat."

"He would overcome them," she said, describing Waller's method.

"He would bind them and repeatedly sexually assault them. He would ransack their homes, and sometimes he would kidnap the victims and take them to ATMs where he would get money out of their accounts, and other times he would steal personal items from their homes."

Beery spoke with one of the victims after Waller's arrest and said she was "over the top with emotion and happiness."

"The victims in this case can stop looking over their shoulders," Beery said. "No one else has to worry about this happening to them."