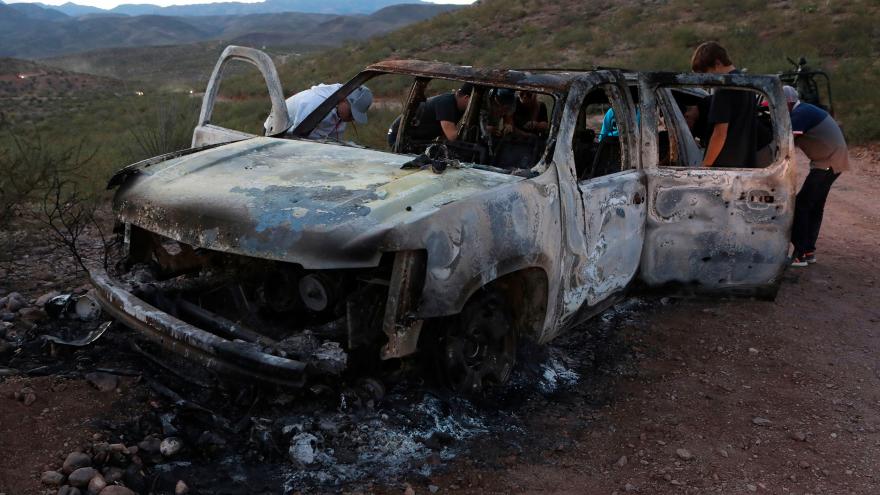 (CNN) -- A man has been arrested in connection with last year's massacre of nine Mormon American-Mexican citizens on a remote dirt road in northwestern Mexico, officials in that country said Wednesday.

The man, "Alfredo L.," was detained in Ciudad Juarez, the Mexican city across the US-Mexico border from El Paso, Texas, the Mexican attorney general's office said.

He "is a member of a criminal organization with a presence in the north of (Mexico), and is likely a participant in the events that occurred" in the November 4, 2019, killings of the three women and six children in Mexico's Sonora state, the office said.

The man is being charged with homicide and organized crime, though no details about what led authorities to believe he was involved in the deaths were immediately released.

The announcement of the arrest came exactly one year after the massacre happened.

The women and children -- dual US-Mexican citizens and members of an independent Mormon community in Sonora state -- were in three vehicles well outside that community when attackers opened fire on them in two separate locations, authorities said. One of the vehicles was about 10 miles behind the others.

Eight other children survived the assaults, including a baby found hidden in one vehicle, and a 13-year-old boy who walked about 14 miles back to the Mormon community, La Mora, to seek help.

Though the victims had different last names, they all had ties to the extended LeBaron family in Mexico.

Mexican authorities last year said they believed drug cartel members, long a driver of violence in the country, committed the massacre. No arrests were immediately made in the month of the attack.

Authorities last year offered various theories as to why the shooting happened, but no single definitive explanation was released.