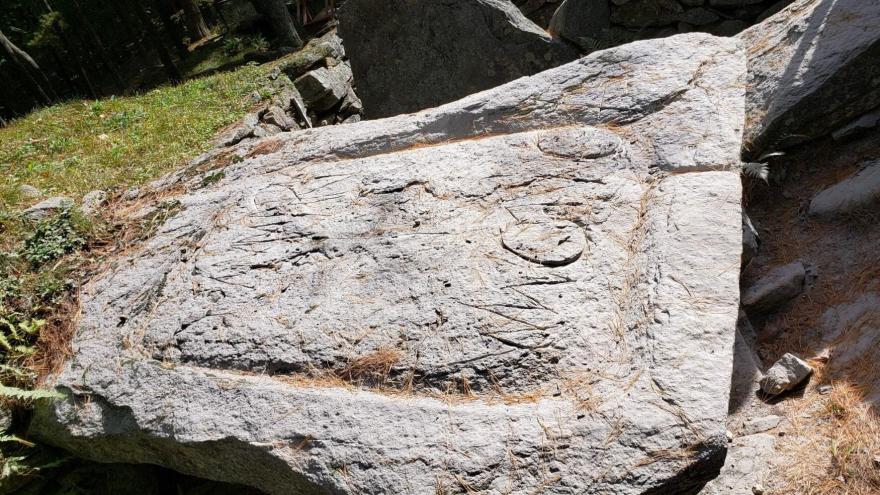 The ancient rock tablet in New Hampshire defaced in 2019. A New Jersey man was arrested March 1 after defacing an ancient rock formation in 2019 with suspected QAnon-related graffiti, according to police in Salem, New Hampshire.

(CNN) -- A New Jersey man was arrested Monday after defacing an ancient rock formation in 2019 with suspected QAnon-related graffiti, according to police in Salem, New Hampshire.

Mark Russo, 50, was charged with one count of felony criminal mischief after carving phrases into a rock tablet with a power tool at "America's Stonehenge" site in New Hampshire, according to a release from Salem Police. He was taken into custody in New Jersey and was later extradited to New Hampshire.

The landmark's website says the arrangement of rocks is approximately 4,000 years old.

Police said that on September 29, 2019, officers responded to the scene following a report of criminal mischief, and they found a rock tablet that was damaged by a power tool.

The phrase "WWG1WGA" was carved into the stone, which police believe stands for "Where We Go One, We Go All," according to Capt. Jason Smith, public information officer for Salem Police. The phrase is commonly associated with the QAnon conspiracy theory.

In addition, the phrase "IAMMARK" was found on the stone, and "an 18 inch tall wooden cross" was strung between two trees which was adorned with "several photographs and hand drawn images," police said.

Investigators also found a note at the site that said "U where (sic) warned not to drink the blood, but children, to get high! These people are sick/ these people are stupid," according to Smith.

Russo pleaded not guilty on Tuesday and his bail was set at $3,000 cash, said Melissa Fales of the Rockingham County Attorney's office. CNN has reached out to Russo's attorney for comment.

Smith told CNN that Salem Police did not originally understand the phrase to be related to QAnon, but through the assistance of the FBI, authorities were able to track the phrase to related social media and other vandalism sites.

The Boston FBI field office, which handles the region the vandalism was found in, said they were only assisting in the investigation and referred CNN back to local authorities.