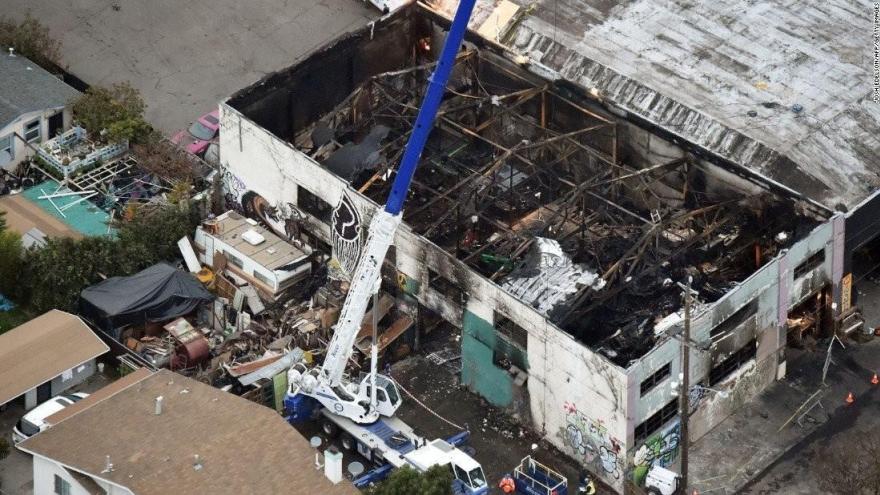 A jury has reached a verdict in the trial of two men facing 36 involuntary manslaughter charges in the 2016 fire at Oakland's Ghost Ship warehouse, the Alameda County Sheriff's Office said.

(CNN) -- A jury on Thursday found one man not guilty of 36 counts of involuntary manslaughter in the 2016 fire at Oakland's Ghost Ship warehouse but could not reach a verdict for the building's leaseholder.

Max Harris was acquitted and Derick Almena's case ended in a hung jury.

As the verdicts were read, there were noticeable gasps and tears from relatives and friends of those who died, CNN affiliate KPIX reported.

Prosecutors alleged Almena, the leaseholder, and Harris, who helped collect rent and acted as creative director for the art collective housed at the 10,000-square-foot facility, were responsible for the deaths resulting from the blaze.

"We are eternally grateful for the verdict today," said Curtis Briggs, an attorney for Harris. Briggs thanked the jury and the community in a press briefing.

Almena's attorney, Tony Serra, said he was "distressed" by the hung jury. According to CNN affiliate KGO, the jury was 10-2 in favor of conviction but could not break the deadlock. "In the next trial, we will do better," Serra said. "It may hang again, it may be acquitted, but we're not going to lose," he added.

Almena and Harris faced up to 39 years in prison if the nine-woman, three-man jury found them guilty on all counts. Their trial began in May and deliberations began last month.

Almena, 49, and Harris, 29, allowed more than two dozen people to live in the dilapidated building, stacked large quantities of flammable materials from floor to ceiling and deceived officials and building owners, prosecutors said in announcing the charges two years ago.

They also held music parties there. The fire came during one such event -- an electronic dance party on December 2, 2016. Three dozen people died because they could not escape the building. One of the warehouse's exits had been blocked, and the building was missing important safety features, such as fire alarms, marked exits and sprinklers, according to authorities.

Father of twins and teen choir member among victims

The defendants' attorneys countered that arsonists set the fire, which their clients could not have prevented, and they presented a witness who testified she heard a group of between 14 and 19 men congratulating themselves on starting the blaze, CNN affiliate KPIX reported.

District Attorney Chief Assistant Kevin Dunleavy said Thursday the office will evaluate what do next regarding Almena. "Our hearts have been with the families of the 36 victims that died in this unspeakable tragedy; that still remains our focus and that will be our focus going forward," he said.

A hearing for Almena has been scheduled for October 4.

Last year, Almena and Harris pleaded no contest to 36 counts of involuntary manslaughter, and Alameda County assistant district attorney Teresa Drenick said the men would avoid trial and face sentencing in August 2018. Almena was expected to get nine years in prison, Harris six.

One of Almena's attorneys, Tony Serra, told reporters that the plea "was an act of ethics and morality" rather than a raw admission of guilt.

"This was not a plea entered into because of legal necessity. We had from my perspective and from many lawyers' perspectives, we had viable defenses," Serra said, according to CNN affiliate KGO. "This is a plea that's been entered into as a moral imperative to eliminate all the trauma and pain and suffering that everyone who touches this case endures."

Previously, Almena had told an NBC morning show that he was "incredibly sorry," while his attorneys had said the charges were a miscarriage of justice and an "attempt to make a scapegoat out of our client."

Warehouse hadn't been inspected in 30 years

Before the men could be sentenced, however, Judge James Cramer nixed the deal after deciding that Almena had not shown sufficient remorse, according to CNN affiliate KRON.

Defense lawyers tried to convince Cramer to reinstate it, but the judge -- who made his decision after hearing two days of testimony from grieving families -- would not budge, the station reported.

At least one family member had expressed disappointment with the deal, saying that while victims' loved ones wanted to hear the men concede culpability, the proposed sentences felt insufficient.

"We just wanted some justice, just not to be two years or four years with time served," said David Gregory, who lost his daughter, Michela, in the fire. "We don't feel that, in our opinion, that was fair justice."