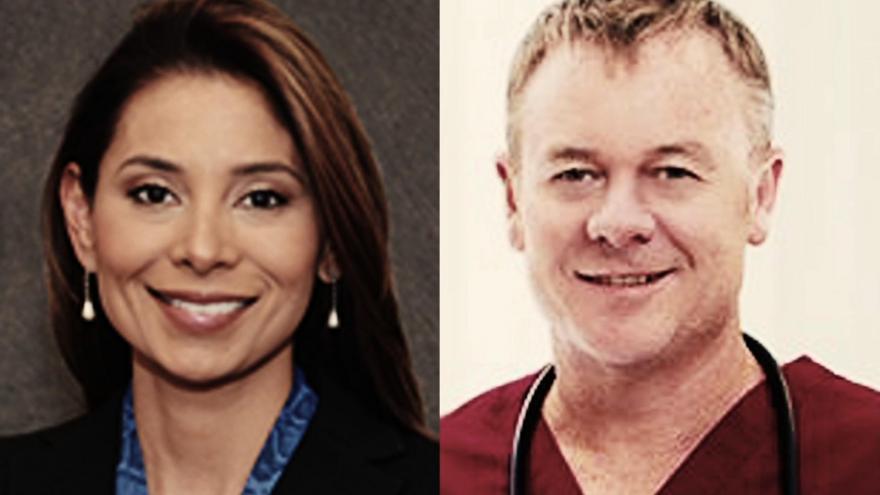 In a bizarre twist in the double murder trial of Bampumim Teixeira, a jury listened to the recording of the defendant's hospital bed statement one day after the deaths of anesthesiologists Lina Bolanos, 39, and Richard Field, 48 in May 2017.

(CNN) -- The man accused of killing two doctors in their Boston penthouse told police he was having an affair with one and killed the other in self-defense, according to a recording played at his trial Thursday.

In a bizarre twist in the double-murder trial of Bampumim Teixeira, a jury listened to the recording of the defendant's hospital bed statement one day after the deaths of anesthesiologists Lina Bolanos, 39, and Richard Field, 48 in May 2017.

Bolanos and Field had desperately tried alerting police, family and friends before they were killed, according to previous trial testimony.

Teixeira, in a barely audible voice, claimed he began having an affair with Bolanos during the brief time he worked in her building. On the day of the killings, Teixeira told police, Field arrived home and found him with Bolanos, whom the doctor stabbed to death in a fit of rage.

"It was hell," Teixeira is heard saying during his interview with Boston police Sgt. Det. Michael Devane. "That was the worst experience of my life."

Victims' relatives upset as they listened to Teixeira's claims

The defendant told police Field "felt betrayed" and became "enraged," according to the recording.

"He stabbed her right in front of me," said Teixeira, adding that he feared for his life.

In the courtroom, relatives and friends of the victims appeared upset as the recording was played.

There has been no evidence presented to support the defendant's account, which has been contradicted by the evidence at trial.

Teixeira told police he killed Field during a struggle after the doctor attacked him, according to the recording. "It was either me or him," said Teixeira, adding that he handcuffed the doctor with Field's cuffs.

He said he grabbed Field's backpack and filled it with jewelry that was in a bedroom, according to the recording.

'I said, 'Ok, I'm about to make some money,'" the defendant told police.

On Friday, the jury heard the remaining 20 minutes of his statement. Teixeira referred to Bolanos as "Linda" in the recording and said he didn't tell anyone about the alleged affair. He told police she was impressed he spoke Portuguese and Spanish.

Asked why he didn't intervene to protect Bolanos, Teixeira claimed Field told him he was going to kill her and "watch, then I'm going to kill you."

"I'm not sorry," he said about killing Field. "A jealous man is the worst thing ever... What I saw with my eyes was crazy."

Under cross examination, Devane said Teixeira's statement about how he sneaked into the building was consistent with surveillance video in evidence. The detective also said investigator did not collect body-camera footage from the responding officers that day.

Teixeira told police he did not have sex with Bolanos that day but had in the past. He claimed Bolanos told him Field was abusive.

When confronted by police in the building, Teixeira said, he told them, "Kill me now."

He said he had "no idea" about writing found on a wall of the apartment.

Earlier Thursday, Lina Bolanos' mother sobbed heavily and left the courtroom when a pathologist described how the doctors were killed.

Medical examiner Richard Atkinson testified Bolanos sustained 24 incised and sharp-force stab wounds. Some fatally severed her internal jugular vein, Atkinson testified. An incised wound, which is caused by a sharp edge, is usually longer than it is deep.

His testimony was briefly interrupted, with the jury leaving the courtroom, when Bolanos' mother, Ana Delia Vergara, broke into heavy sobs as she heard the details.

Assistant District Attorney John Pappas asked someone seated with the family to explain that Vergara could not stay in the courtroom unless she composed herself. Bolanos' mother walked out.

The autopsy showed Bolanos also suffered multiple blunt force injuries, including significant injuries to her face and head, according to Atkinson. Field suffered a single fatal stab wound to the neck that severed his carotid artery, Atkinson said.

The doctors also sustained injuries consistent with being bound or cuffed, the medical examiner testified.

During brief cross-examination, Atkinson said he was unable to determine who died first or the time of death. He said he could not tell what kind of knife was used.

Prosecutors said Teixeira briefly worked as a concierge at the building where he is accused of killing the doctors.

The defendant allegedly used his familiarity with the complex to lurk around and find the right moment to sneak into the couple's 11th floor apartment, according to prosecutors.

Teixeira, 33, has pleaded not guilty. Closing arguments could come as early as Friday.

"No video, no audio, no scientific evidence, no credible evidence will tell you that Bampumim Teixeira broke into the home of Lina Bolanos and Richard Field and murdered them," defense attorney Steven Sack argued. "And that's because he didn't."

Prosecutors said that in the bloodied penthouse where the couple had been beaten and bound with duct tape police discovered a chilling message scrawled on a wall.

The words "payback" and "he killed my wife," were written out in large letters, Boston Police Department Sgt. Edward Meade testified, according to CNN affiliate WHDH.

Meade said officers found photos that were crossed out and marked.

Police said at the time of the slayings they were first contacted on the evening of May 5, 2017, by the building concierge, who had been alerted by a concerned friend following a text from Field.

Matthias Heidenreich -- a friend of the doctors -- testified that he received a series of texts from Field asking that he call 911 because a gunman had entered their apartment. He said that he responded but got no answer.

The messages started "Call 111" -- an apparent reference to 911 -- followed by "Gun man", and "in house" before ending with "Serious," according to the Boston Herald.

Bolanos' godmother, Amanda Gibbs, testified she recognized "Lina's voice" in a phone call to 911 that was played at trial.

In the call, Bolanos' voice was muffled. When she was unable to respond to repeated questions, the operator said she was "releasing the call" and hung up, CNN affiliate WCVB reported.

Teixeira was arrested in a building hallway, where he told police there were bodies in the penthouse, Boston police Det. Sean Wallace testified.

Boston Officer Scott MacIsaac testified last month that he shot Teixeira after he saw a silhouette that appeared to be holding a firearm, WCVB reported.

Teixeira was hit in his left hand, abdomen and leg. He was wearing gloves and dark clothing, authorities said.

Outside the apartment, police found a backpack with a replica firearm and jewelry, police said at the time of the slayings. A carving knife and a bright yellow shirt were also found nearby, police said.

The defendant moved from Cape Verde, an island nation off the coast of Africa, to Boston in 2010 to live with his adoptive mother. But after a year in the United States, at age 24, he abruptly and permanently severed that relationship, Maria Luisa Teixeira told CNN in 2017.

Field was instrumental in founding North Shore Pain Management, according to a statement from the staff there at the time of his death. Bolanos was a pediatric anesthesiologist at Massachusetts Eye and Ear, according to the clinic's CEO, John Fernandez.