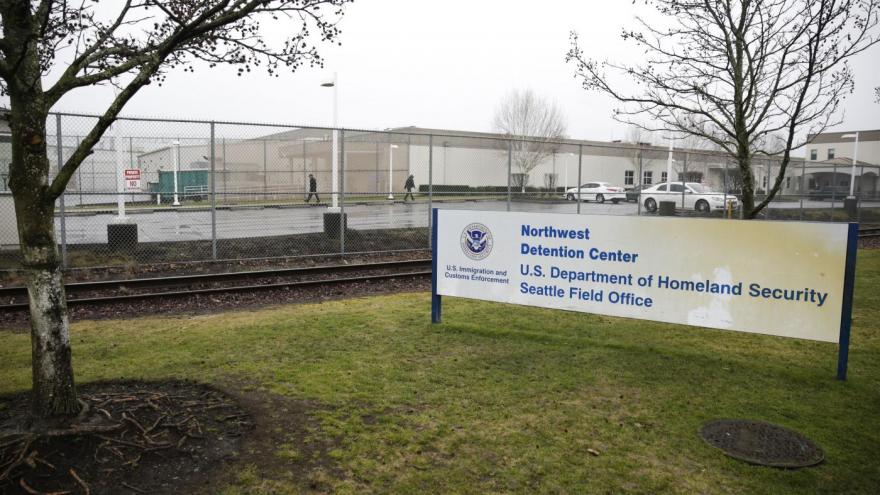 The shooting occurred about 4 a.m. local time outside the US Immigration and Customs Enforcement's Northwest Detention Center, where the gunman attempted to set the building and parked cars on fire, according to police spokeswoman Loretta Cool.

(CNN) -- An armed man was fatally shot early Saturday during a confrontation with police after he hurled incendiary devices at a Washington state immigration detention center, Tacoma police said.

The shooting occurred about 4 a.m. local time outside the US Immigration and Customs Enforcement's Northwest Detention Center, where the man attempted to set the building and parked cars on fire, according to police spokeswoman Loretta Cool.

Authorities did not immediately identify the man who was armed with a rifle, saying in a statement the "medical examiner will release the identity of the victim when it is appropriate."

It was not known whether the man fired at the officers, Cool said. Authorities are examining footage from surveillance cameras at the detention center as part of the investigation, she said.

The assault on the privately-run immigrant detention facility came amid protests over ICE plans to begin the previously postponed raids across the country on Sunday. The goal is the arrest of thousands of migrant families who already have court orders to be removed, according to US officials.

A peaceful rally against the raids at the Tacoma detention center had ended about six hours before the shooting, Cool said.

The immigration enforcement action has sparked protests in nearly a dozen American cities, drawn criticism from mayors and immigrant rights advocates, and unleashed waves of fear among undocumented immigrants across the country.

The motive behind the armed man's pre-dawn attack in unclear.

"We don't know the motivation," Gov. Jay Inslee told CNN Saturday. "I'm going to keep an open mind about this as the investigation proceeds and I hope that calm can be the order of the day."

Inslee said he did not know whether the attacker was targeting detainees or staff.

Inslee, a Democratic presidential hopeful, said the Trump administration is "intentionally trying to create anxiety and fear" among undocumented families.

The Tacoma facility, which holds nearly 1,500 detainees, has been the scene of more than a dozen hunger strikes in recent years -- each involving from a dozen to hundreds of detainees, over complaints of inadequate food and medical care, among other issues.

Police said the man set a vehicle ablaze in the center's parking lot and attempted to ignite a propane tank with a flare to set the building on fire. Officers called out to the man and shots were fired, according to a police statement. It's not known whether the man fired on the officers, Cool said.

The gunman died at the scene; four officers involved in the shooting were placed on administrative leave per department policy. The incident is under investigation.

This weekend ICE is moving forward with an operation targeting migrants with court-ordered removals that was previously called off in June.

The raids triggered pro-immigrant protests across the country over the weekend, including a rally and march to ICE headquarters in Chicago on Saturday, CNN affiliate WLS reported.

In New York, the NYPD Sergeants Benevolent Association urged its 13,000 active and retired members to stand "shoulder to shoulder" with ICE agents conducting arrests throughout the weekend, according to a post on the union's Twitter account.

"They are members of law enforcement just like you and we must never participate in the politics being applied upon our duty to uphold the law," union president Ed Mullins said in a memo circulated among its members on Friday.

Mullins encouraged members "to NOT leave any I.C.E. Agent abandoned if in need of assistance and to stand shoulder to shoulder with each agent so that they too can return home safely to their families."

He also asked members to contact the union should they "encounter any resistance" from the NYPD or the city in assisting agents in need of help.

Responding to the union's memo, the NYPD said in a statement Saturday that it "does not participate in civil immigration enforcement. Our Department has worked tirelessly to engage immigrant communities and include them in our policing process."

Democratic New York Mayor Bill de Blasio this week used the impending raids as an opportunity to amplify his calls to abolish ICE.

"This is a policy of fear and division -- and more proof that we need to abolish ICE," de Blasio said in a tweet Thursday. "Our city is stronger, safer and more prosperous than ever BECAUSE of our immigrant communities. We will do EVERYTHING we can to protect them."