Major's not the only misbehaving White House dog. But don't let that deter you from adopting a shelter pup 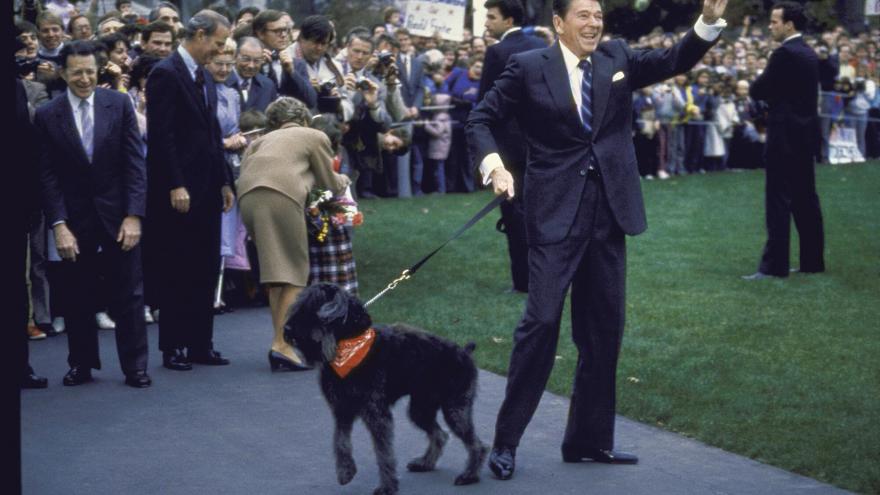 President Ronald Reagan with his dog Lucky as he and first lady Nancy Reagan prepared for a trip to Geneva on November 1, 1985.

(CNN) -- So many people are adopting dogs in this time of pandemic-induced loneliness that shelters are being emptied out. A recent "biting incident" involving a certain presidential pup, though, might have some reconsidering.

Major, a German shepherd adopted by the Bidens in 2018, was removed from the White House last week after he displayed aggressive behavior toward a member of White House security. He and Champ, the Bidens' older German shepherd, were sent to the Biden family home in Delaware. (The move may not be permanent -- the dogs have been known to stay there when the first lady is out of town.)

Major is believed to be the first shelter dog in the White House, though there have been rescue dogs before him. And he certainly isn't the first presidential pooch to behave badly.

But one bad incident shouldn't deter you from bringing home a four-legged addition to the family, animal advocates say.

"There is no data to support that dogs who are adopted from a shelter or rescue organization are more likely to bite," Kitty Block, president and CEO of the Humane Society of the United States, wrote in an email to CNN. "Adoption is a wonderful choice for many families."

Helping your furry friend adjust to a new home is a process, experts say, and it takes time and patience to instill good behavior.

Every dog is different

It's important to get to know a dog before adopting to make sure that they're a good fit for your family, says Block.

Animal shelters and rescue groups typically have a record of behavioral and medical information about each of their dogs that can help you make the right decision. And while it could be worth taking into consideration factors such as the dog's breed, spending personal time with your potential new pet is a better bet.

"The HSUS believes that every dog is an individual and while some breed specific research may be helpful, it's best to get to know a dog one-on-one," Block wrote. "With the majority of dogs in the United States being of mixed breed, their individual temperament is more important than assumptions about their breed(s)."

Once you find the perfect match and bring your new pup home, you might find that they still cause trouble every now and then.

The Shelter Pet Project, an adoption resource run by the Humane Society of the United States and animal welfare group Maddie's Fund, notes that some shelters and rescue groups offer training classes or other behavioral services that could help smooth your dog's transition.

Some antics are inevitable

It's natural for dogs to misbehave from time to time -- one need look no further than the long line of White House pups.

In addition to the most recent incident, three-year-old Major has developed a bit of a reputation for unruly behavior and sometimes jumping, barking or charging at staff and security, according to people CNN spoke with about the dog's demeanor at the White House.

Other presidential dogs have acted out on occasion, too.

Sunny, the Obama family's Portuguese water dog, knocked over a toddler during a Christmas celebration a few months after first arriving at the White House in 2013. In 2017, Sunny reportedly bit a family friend on the cheek.

Barney, George W. Bush's Scottish terrier, once bit a reporter and a family friend, while Buddy, Bill Clinton's chocolate Labrador, was once spotted relieving himself on the carpet.

And Teddy Roosevelt's dog Pete, thought to be a Bull Terrier or Pit Bull mix, nearly caused a diplomatic crisis when he famously ripped the pants off the French ambassador in the early 1900s.

Some antics are to be expected when bringing a dog into a new home -- especially one as vast and visible as the White House.

Dogs undergo a transition period when settling into a new environment, says Block. And while some dogs adjust to their surroundings relatively quickly, others can take days, weeks or months to feel comfortable and build trust with people.

The Humane Society of the United States offers some tips that can help smooth that transition.

Routines are key in teaching puppies that there are times to eat, play outside and relieve themselves. Taking them outside often and establishing a set location for them to do their business can help avoid accidents indoors. And setting a schedule for feeding them and filling their water dish can help them be more consistent.

Positive reinforcement training can help you change or shape your dog's behavior, and introducing dogs to unfamiliar surroundings gradually can help acclimate them and make the adjustment period smoother, Block adds.

Still, each dog has its own needs and some struggle more than others to adapt to certain environments. In some cases, it might be best for them to find a new home.

Teddy Roosevelt's dog was removed from the White House after the pants snafu and transferred to the family's home in New York. The Reagans' dog never quite got used to life at the White House either, and was eventually sent to their ranch in California.