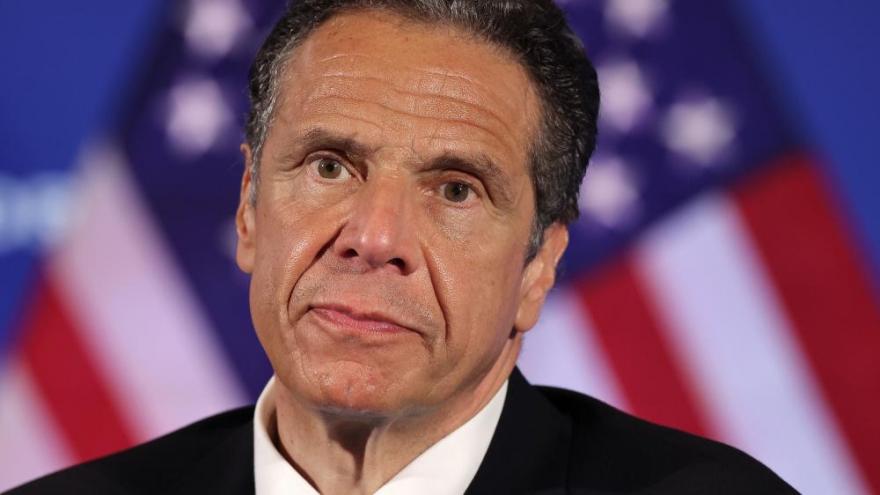 New York Governor Andrew Cuomo, pictured in May 2020, has faced calls from the majority of New York House Democrats to resign from office in the wake of sexual harassment allegations and his handling of Covid-19 deaths at state nursing homes. holds a news conference at the National Press Club May 27, 2020 in Washington, DC. Following a closed-door meeting with President Donald Trump at the White House, Cuomo leveled criticism at Republican senators and other politicians that he said want to limit federal aid for New York to combat and recover from the coronavirus pandemic. (Photo by Chip Somodevilla/Getty Images)

The announcements add additional pressure not only on Cuomo -- who has vigorously resisted calls for his resignation and brushed them off as political maneuvers by his rivals -- but on the Biden White House, which has so far declined to call for the three-term Democratic heavyweight to step down, instead pointing to an ongoing investigation by the state's attorney general into the harassment allegations. An aide told CNN the White House had no new comment on the matter early Friday evening.

"Confronting and overcoming the Covid crisis requires sure and steady leadership. We commend the brave actions of the individuals who have come forward with serious allegations of abuse and misconduct," Schumer and Gillibrand said in a joint statement. "Due to the multiple, credible sexual harassment and misconduct allegations, it is clear that Governor Cuomo has lost the confidence of his governing partners and the people of New York. Governor Cuomo should resign."

On Friday, 16 members of New York's 19-person Democratic House delegation said Cuomo must resign, arguing that the allegations have impeded his ability to effectively govern and serve the people of New York.

The congressional group demanding he step down includes members from across the party's ideological lines and included both senior figures connected to the state political establishment and younger progressive lawmakers. Their decision follows another announcement, less than 24 hours earlier, by Democrats in the state Assembly to launch an impeachment investigation that will be carried out concurrently with the state attorney general's independent probe.

Addressing the allegations Friday, Cuomo said in a news conference to "let the review proceed. I'm not going to resign."

A source familiar with the conversations that preceded Friday's coordinated call by New York House Democrats said the group has been in touch as the allegations mounted, but only agreed to move forward together on Thursday. They decided to wait until Friday morning to go public so as not to step on President Joe Biden's speech Thursday night.

Both the source familiar and a House Democrat told CNN that a major factor in why so many Democratic lawmakers called for the governor's resignation Friday was a story in the Albany Times Union in which an accuser described recent, physical allegations against Cuomo.

CNN has not been able to confirm the details of the Albany Times Union story, and because the female aide involved in the incident has not been named, the allegations cannot be corroborated.

The two sources said that the report -- combined with State Assembly Speaker Carl Heastie's announcement on Thursday that Democrats there would begin an impeachment investigation -- seemed something of a tipping point.

Cuomo denied the Albany Times Union report last week, saying, "I have never done anything like this. The details of this report are gut-wrenching. I am not going to speak to the specifics of this or any other allegation given the ongoing review, but I am confident in the result of the Attorney General's report."

The decision to go in, nearly all at the same time, was also an acknowledgment that when one made the call, it would up the pressure on all the rest.

House Judiciary Committee Chair Jerry Nadler said in a statement that Cuomo has "lost the confidence of the people of New York" and House Oversight Committee Chair Carolyn Maloney said Cuomo's resignation would be in the "best interest of all New Yorkers."

They join Rep. Kathleen Rice, who earlier this month became the first out of the 19 Democrats in the New York House delegation to call for Cuomo to step down.

Rep. Alexandria Ocasio-Cortez and freshman Rep. Jamaal Bowman said they agreed with others "who have concluded that Governor Cuomo can no longer effectively lead in the face of so many challenges."

"These allegations have all been consistent and highly-detailed, and there are also credible media reports substantiating their accounts," Ocasio-Cortez and Bowman said in a joint statement, adding that they "believe these women" who have come forward with sexual harassment allegations against Cuomo.

Maloney, who also chairs the Democratic Congressional Campaign Committee, argued that New Yorkers need a governor "laser-focused" on getting them through the Covid-19 pandemic.

Cuomo's administration underreported the number of Covid deaths among New York's long-term care patients by approximately 50%, according to a state attorney general report from January, and then delayed sharing that potentially damaging information with state lawmakers.

The administration left out Covid-19 deaths of residents who had been transferred out of the facility or to hospitals, a statement from Attorney General Letitia James' office said. While the report found that the overall number of deaths did not change, it led to a misrepresentation of the Covid-19 death toll in New York's long-term care facilities.

Cuomo and his administration defended their decision, arguing that with both the Justice Department and New York state lawmakers asking questions, the federal inquiry became their priority. The governor denied any suggestion of wrongdoing.

Amid the mounting criticism, Cuomo also faces accusations from multiple women of sexual harassment or inappropriate behavior. The scandal, which has consumed New York politics over the past two weeks, began on February 24, when former aide Lindsey Boylan alleged in a Medium post that Cuomo kissed her on the lips against her will in 2018 after a brief, one-on-one meeting in his New York City office.

Last week, Cuomo offered an apology to the women and said he never knew he "was making anyone feel uncomfortable" and denied touching anyone inappropriately.

Nadler said Friday that the allegations against Cuomo are "serious" and credible, and Cuomo is "guaranteed due process under law," but the question of confidence in New York's leader is one of "political judgment."

Several of the Democrats on Friday said James's investigation into Cuomo's behavior should continue.

On Thursday, more than 50 Democrats of the New York state Senate and Assembly said in a letter that "it's time for Governor Cuomo to resign," arguing that he is "ineffective in this time of most urgent need." The top Democrat in the state Senate, Senate Majority Leader Andrea Stewart-Cousins, on Sunday had said "for the good of the state Governor Cuomo must resign." State Comptroller Tom DiNapoli joined the calls Friday evening.

Lawmakers calling for Cuomo's resignation have argued that his position is increasingly untenable as the state heads into a period of critical budget negotiations that will determine the state's course as it seeks to revive its pandemic-leveled economy.

Friday's outpouring of calls for Cuomo's resignation by House Democrats had renewed focus on Schumer and Gillibrand, who in 2017 was the first to call on then-Minnesota Sen. Al Franken to resign after multiple women accused him of touching them inappropriately.

Schumer had said on ABC's "The View" Thursday that the allegations against Cuomo were "very troubling" and must be thoroughly investigated by the state attorney general, but he stopped short of saying Cuomo should leave office. Gillibrand on Wednesday condemned Cuomo's behavior but refused to discuss with CNN why she viewed the allegations differently than the accusations Franken faced.

Not all House Democrats have called for Cuomo to step down.

Democratic Rep. Hakeem Jeffries, who also serves as Democratic caucus chair, said on Twitter the allegations are "very serious and deeply disturbing" but called for the investigation to continue.

And Reps. Tom Suozzi and Gregory Meeks said if Cuomo cannot continue to govern effectively, he should resign.

White House press secretary Jen Psaki said Friday that the White House had no updates when asked if Biden believes Cuomo should resign.

"The President believes that every woman who's come forward ... deserves to have her voice heard, should be treated with respect and should be able to tell her story," Psaki said, adding that Biden believes the independent investigation should move forward.

During his conference call later Friday, Cuomo made clear he would not be resigning from office despite the public pressure.

He encouraged the public to let the state attorney general's investigation play out and to "wait for the facts."

"I am confident that when New Yorkers know the facts from the review, I am confident in the decision based on the facts," he said. "But wait for the facts. An opinion without facts is irresponsible."

He claimed that he has "not had a sexual relationship that was inappropriate, period."

Cuomo added that he will avoid "distractions" and focus on his job.

This story has been updated with additional reporting on Sunday.