'Majority' of Afghans who worked for the US and applied for visas were likely left behind, State Department official says 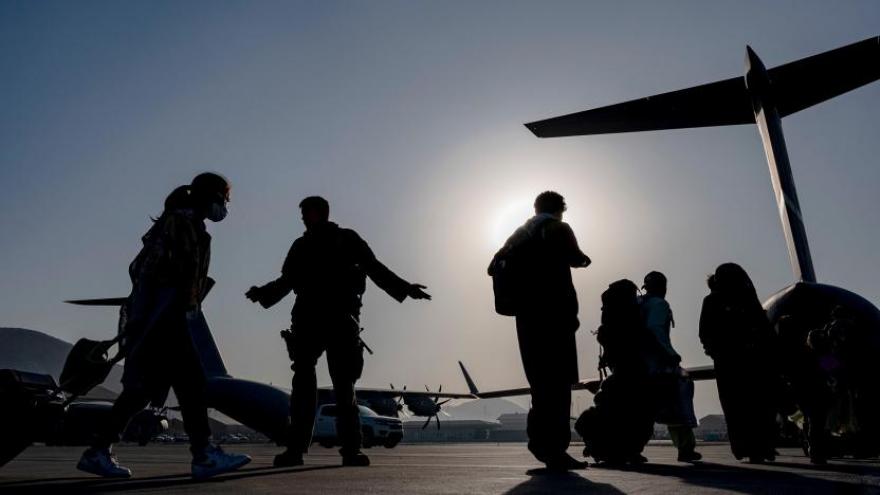 (CNN) -- "The majority" of Afghans who worked for the United States during its two-decade military campaign were likely left behind in the chaotic and rushed evacuation from Afghanistan, a senior State Department official said Wednesday.

The official said they did not have a specific count of the Afghan Special Immigrant (SIV) applicants and family members who did not make it onto evacuation flights, "but I would say it's the majority of them, just based on anecdotal information about the populations we were able to support."

More broadly, the official described an evacuation effort confronted by numerous challenges -- one that left US officials who worked on the ground "haunted by the choices we had to make and by the people we were not able to help depart in this first phase of the operation."

"It wasn't pretty. It was very challenging," the senior official said, "and it involved some, some really painful trade-offs and choices for everyone involved."

There were at least 20,000 SIV applicants in the pipeline prior to the US withdrawal, and the State Department has not provided a specific count of how many of the 123,000 people evacuated from Afghanistan fall into that category.

State Department spokesperson Ned Price said Wednesday that more than 31,000 people had arrived in the US from Afghanistan between August 17 and 31, and nearly 24,000 of them were "Afghans at risk" -- a broad category that includes SIVs, other visa holders, those recommended for refugee designations, and others.

The State Department official told reporters that in early stages of the evacuation, the US tried to prioritize access for late-stage SIV applicants and other categories, but said the effort was unsuccessful because "every credential we tried to provide electronically was immediately disseminated to the widest possible pool."

"We simply did not have the people or the time to be able to try to sift through that crowd of people demanding access," the official said.

"Every day was a constant improvisational effort to figure out what was going to work that day," they said. "As we got deeper into the process, we unfortunately had to start prioritizing the people to whom we had a legal obligation first and foremost, and that was our fellow American citizens. As we had room, space, capacity to manage other populations, we tried very hard to do that."

The official spoke of the difficult physical access points to the airport, the stream of threats from ISIS-K, viral communications that led to huge swaths of Afghans having identification meant for a priority group, and mischaracterization by outside groups of the people they were trying to get into the airport.

They also said the Taliban had ""variable" criteria for passage through their checkpoints to the airport, criteria that at times was "inconsistent with ... assurances they had given to us that they would allow certain people to pass."

"Despite our best efforts to come up with an approach on a day-to-day, sometimes hour-by hour-basis that would allow groups to pass, it was unpredictable as to whether they would actually be able to get through," the official told reporters Wednesday.

Although Gen. Frank McKenzie, the head of US Central Command, described the Taliban as "very pragmatic and very businesslike," the senior State Department official said that pragmatism "was focused on ensuring that we would be able to depart on the schedule that our President had set and that we would not be lingering or providing reasons why we needed to stay longer than August 31."

They said the idea that the US handed the Taliban "a holistic list" of SIV applicants and other vulnerable Afghans seeking to leave the country "is incorrect," but that they did "on a couple of occasions" provide bus manifests to try to facilitate those vehicles' passage through Taliban checkpoints.

"This was to try to provide a degree of confidence that the Afghans who were on those buses were, in fact, Afghans who were locally employed staff of our diplomatic mission or other allied diplomatic missions, that they were foreign passport holders, so in some cases dual nationals, in other cases, native born citizens of those particular countries, and in some other cases that they were individuals for whom we had a particular interest and wanted to facilitate the departure of," they explained.

"When it worked well, and it did for a couple of days, for periods, It enabled us to move through those checkpoints, thousands of people that we and NATO allies and partners were seeking to have depart," they said.

However, the official acknowledged there were also days where it did not work well.

"We had a couple of instances where buses were a mix of foreign nationals and Afghan local employees of other missions, and the (Taliban) would only let pass the foreign nationals, and they turned away or they held at that location the Afghan citizens who were on that particular movement," they said. "In some of those cases, we were able to successfully persuade them to then, in subsequent days, to allow that group to go forward."

The State Department official spoke of the anguish that many of those working on the ground felt in the attempt to try to save as many people as they could in the rushed final days of the US presence on the ground.

Chairman of the Joint Chiefs of Staff Gen. Mark Milley told reporters at the Pentagon Wednesday that he feels "pain and anger" over seeing what has happened in Afghanistan "over the last 20 years and over the last 20 days."

In addition to the thousands of vulnerable Afghans who did make it onto evacuation flights, there is also a group of American citizens who were not evacuated by Monday's withdrawal.

McKenzie told reporters Monday, "We did not get everybody out that we wanted to get out."

Secretary of State Antony Blinken said Monday that the US was committed to getting these Americans, as well as vulnerable Afghans, out of the country.

"We've worked intensely to evacuate and relocate Afghans who worked alongside us, and are at particular risk of reprisal. We've gotten many out, but many are still there. We will keep working to help them. Our commitment to them has no deadline," he said.