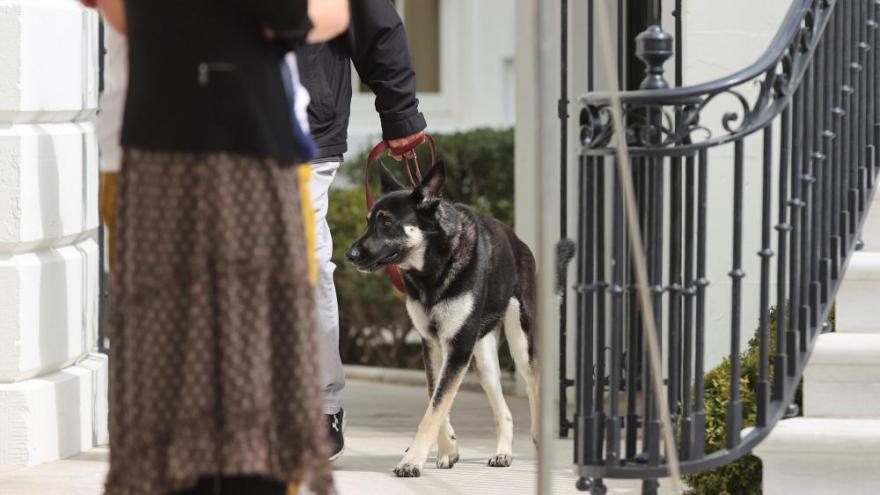 (CNN) -- Some Major news at the White House: Major Biden has made his return to 1600 Pennsylvania Avenue after training following two biting incidents, but he may soon have to adjust to another furry friend.

"He's back," first lady Jill Biden said of Major in an interview with NBC News that aired Friday.

"We were going to bring him in to see you," President Joe Biden said, as the NBC reporter joked that that may not be a prudent idea.

But the training worked, the first lady said, insisting that German Shepherd Major is a "sweet, lovable dog."

Jill Biden also confirmed that the family will be adding a cat to their brood, something she had hinted at during the presidential transition.

"She is waiting in the wings," the first lady said, offering some catnip to presidential pet observers, though she did not share details on when the feline would officially be joining the first family.

Pressed on how Major would react, she said his remedial training in the Washington, DC, area included a special introduction to cats.

"That was part of his training, they took him into a shelter with cats -- and he did fine," Jill Biden said.

Earlier this month, the first lady's office announced that Major Biden would be undergoing "some additional training to help him adjust to life in the White House." The private, off-site training was "expected to last a few weeks," her press secretary, Michael LaRosa told CNN.

Last month, Major had a biting incident with a Secret Service agent that required the victim be seen by the White House medical unit. And less than three weeks later, CNN reported Major had bitten another White House worker, this time a member of the National Park Service.

The new Biden cat will be joining Major, the first shelter dog to live in the White House, and Champ, the Bidens' older dog, who has been with the Biden family for more than 10 years. The Biden pups restored the tradition of presidential pets after a four-year break during the Trump administration, joining the ranks of Socks Clinton, Barney Bush, Macaroni Kennedy and Rebecca Raccoon Coolidge, among many others.

Major is not the first rescue pet in the White House. Before Major there was Yuki, a mixed breed pup abandoned by his owner at a gas station in Texas and rescued by President Lyndon B. Johnson's daughter Luci. Bill Clinton's family cat, Socks, was also a rescue. The new cat's rescue status was not immediately clear.