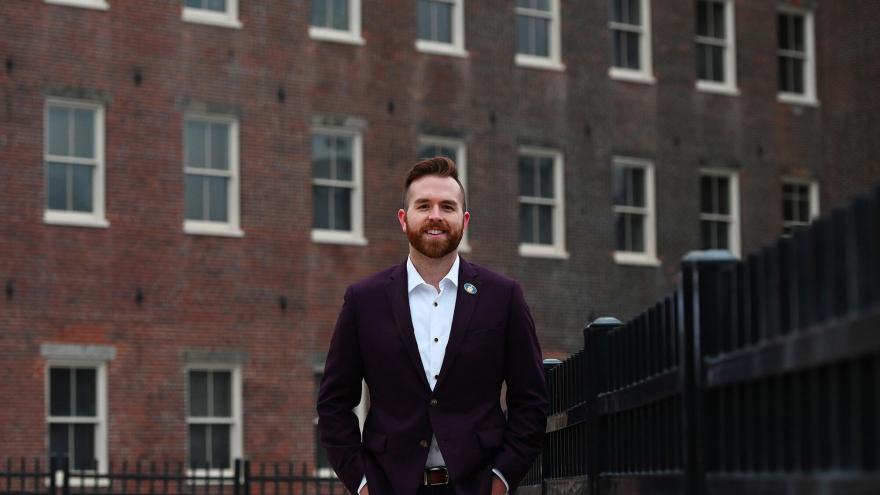 (CNN) -- The oldest state in the nation now has the nation's youngest House speaker in modern history.

At 28, Ryan Fecteau is also the first out gay person in the Maine Legislature's most powerful role, according to Maine's House Clerk and the National Conference of State Legislatures.

Fecteau was elected by his House colleagues in Augusta on Wednesday.

Fecteau's rise -- and Democrats' hold on both chambers this November in notoriously swingy Maine -- is a bright spot for Democrats, who struggled in state legislative races around the country.

Those who have worked with Fecteau attribute his success to a political savvy that transcends his age. Even before he made his speaker bid official, Fecteau met with, telephoned or Zoomed each of his 79 Democratic colleagues during election season, traveling north along the sea coast to districts near the Canadian border.

"I noticed that this past year, he's traveled all over the state of Maine," said former GOP Sen. Joyce Maker of Calais, who kept up with Fecteau's travel on Facebook. "I didn't quite get it when I first saw it. I don't think in my time in the legislature I saw someone that wanted to be a leader do that."

Running for office at 22

Unlike many states, Maine's citizen legislature has term limits, capping service at four two-year terms in both the House and Senate -- which Fecteau says gave him an opening despite his relative lack of seniority.

"I probably wouldn't even be here if not for term limits," Fecteau said in an interview.

Fecteau won a House seat from his native Biddeford in 2014, when he was 22. He had just graduated from The Catholic University of America in Washington, DC, studying political science, theology and religious studies.

Once in Augusta, Fecteau was assigned to work on the Labor, Commerce, Research and Economic Development Committee, tackling issues including addressing "the reasons why many of my peers were choosing not to stay in the state," he said. "That is and has been my real motivation for being in Augusta."

It also helped that he quickly built friendships with other members. "He appreciated our older person humor," said former Democratic state Rep. Anne-Marie Mastraccio. She served on the committee with Fecteau. "He would make fun of us but we could make fun of him. He just fit in."

Fecteau was 26 when he started the leadership role. "I think with term limits, it's one of the funny things that results," he said. "Someone at 26 can be a more seasoned legislator than someone who is in their 50s or 60s or 70s."

Gideon hit her own term limit in 2020, leaving the speakership open and the House to pursue her unsuccessful challenge of incumbent US Sen. Susan Collins and giving Fecteau an opening to replace her.

"Did I expect to be the next speaker of the House? No," Fecteau said.

Unlike its federal counterpart, Maine's constitution requires a balanced state budget every year -- no matter what. With the pandemic drying up state revenues, that puts Fecteau in a tough spot.

"It's going to be miserable," said Mastraccio -- but she added that Fecteau is well-positioned to handle it.

"We're at a point where his experience on the labor committee, his experience as assistant leader, working with a really good speaker of the house for four years, I think he will know how to lead people through this horrible time that we aren't done with," she said.

"He is the best person for that job right now," she added.

Facing his own term limit, Fecteau is entering his final two years in the House. He just started a new job with Washington DC-based data firm Catalist as an account executive -- and he and his 3-year-old Goldendoodle, Pancake, are benefiting from pandemic-era work from home flexibilities in Biddeford.

"I've served in the legislature since I was 22 years old, and I will be 30 by the time this term is up," Fecteau said. "I have to think about what I want."