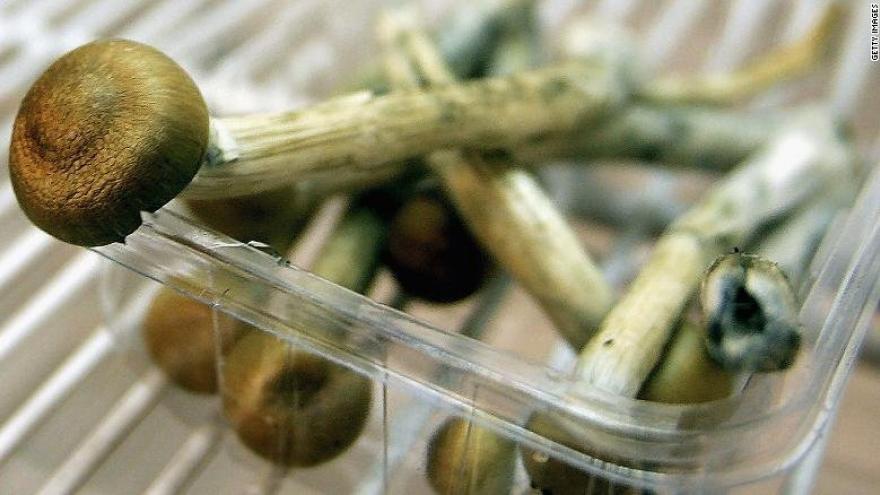 (CNN) -- "Magic mushrooms" may have moved one step closer to becoming a treatment for depression.

The active ingredient in psychedelic mushrooms is called psilocybin -- and a new British study suggests it could safely be used to treat depression when other drugs have failed, offering hope to millions of patients worldwide.

The study compared the effects of 10mg and 25mg doses of psilocybin, and a placebo.

There were "no serious adverse events" and "no negative effects" on cognitive and emotional function among the volunteers that took psilocybin, according to a Compass Pathways press release. Instead, the volunteers experienced "changes in sensory perception and positive mood alteration" -- typical effects of psychedelic drugs.

"The results of the study are clinically reassuring and support further development of psilocybin as a treatment for patients with mental health problems that haven't improved with conventional therapy, such as treatment resistant depression," said James Rucker, one of the lead researchers from King's College London, in the press release.

This is just the first of two phases in their testing -- the second phase trial will involve over 200 patients with depression across Europe and North America.

More than 264 million people worldwide are affected by depression, according to the World Health Organization. The most common pharmaceutical treatment is to take antidepressants like Prozac, which increase levels of serotonin in the brain to improve mood.

But this type of antidepressant doesn't work for everyone, and is generally prescribed as a long-term treatment to maintain effectiveness.

By contrast, psychedelic drugs quickly alter our brain function, and could therefore potentially treat patients in just a few doses when combined with therapy, researchers have suggested. Though research remains in the early stages, such a treatment could target a range of mental health conditions, including anxiety, addiction, and obsessive compulsive disorder (OCD).

Here's how it works: theoretically, psilocybin helps "loosen" the deeply-rooted patterns of thinking and behavior behind many of these mental disorders, according to King's College London. It could "relax" the parts of our brain that control these behaviors, thus allowing old patterns to change or fade. Patients who have received psilocybin have described coming down from the high with "new insights" and changed perspectives on their difficulties, said the university.

A 2014 Imperial College London study supports this theory. After volunteers were injected with psilocybin, the parts of their brain associated with emotional thinking became more active, while the introspective, self-conscious part of their brain became less active.

But psilocybin and other pschedelics are likely still a long way to being approved, developed, and rolled out as treatments. Only recently have US cities like Denver and Oakland moved to decriminalize psilocybin; nationwide, it's still listed as a Schedule 1 controlled substance, meaning it has no medicinal properties under official US federal policy.