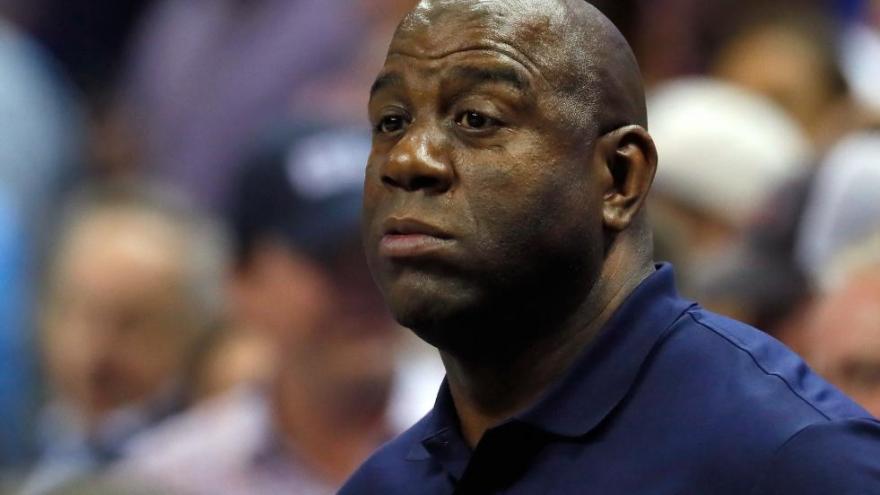 Magic Johnson attends a game between the Kentucky Wildcats and the UCLA Bruins in 2017.

(CNN) -- Magic Johnson may no longer be playing in the NBA, but the Hall of Fame member is still making valuable assists.

Johnson announced that EquiTrust Life Insurance Co., of which he owns a majority, is providing $100 million in capital to fund federal loans for minority and women business owners who have been hit hard by the coronavirus pandemic.

EquiTrust will work with MBE Capital Partners, a lender that specializes in asset-based loans for minority-owned small businesses, to distribute the loans through the federal government's Paycheck Protection Program.

The loans are aimed at supporting people of color and women who operate businesses in underserved communities, according to a news release.

The news was first reported by The Wall Street Journal.

The partnership was borne out of a concern that women and people of color were having difficulty accessing the loans offered by the Small Business Administration's emergency coronavirus relief program -- part of the federal government's massive stimulus package.

"Johnson's EquiTrust is providing critical financial support to underserved communities and businesses that have been traditionally neglected," EquiTrust and MBE Capital Partners said in a joint news release. "These small and diverse businesses often have difficulty developing strong lending relationships with big banks."

The goal is to help 100,000 businesses secure resources that will sustain them through the pandemic, MBE Capital CEO Rafael Martinez said on MSNBC.

SBA program has come under criticism

The Paycheck Protection Program has been plagued by technical hiccups and questions about whether lenders were prioritizing the businesses that needed the money most after several deep-pocketed companies received loans, including the Los Angeles Lakers -- the storied NBA franchise that Johnson was long affiliated with. The team returned the money.

After the initial $349 billion Congress allocated to the program ran dry, lawmakers replenished the fund with an additional $310 billion. Still, there have been concerns that money earmarked for smaller lenders is running low.

The federal CARES Act, which created the Paycheck Protection Program, instructed the SBA to prioritize underserved and rural markets. But a recent inspector general report found that the agency had not communicated this priority to lenders.

The report also found that the SBA did not require demographic data to identify borrowers of the program in underserved markets, making it hard to determine how much funding was going towards the intended communities.