Macron refuses to back down after Trump attack 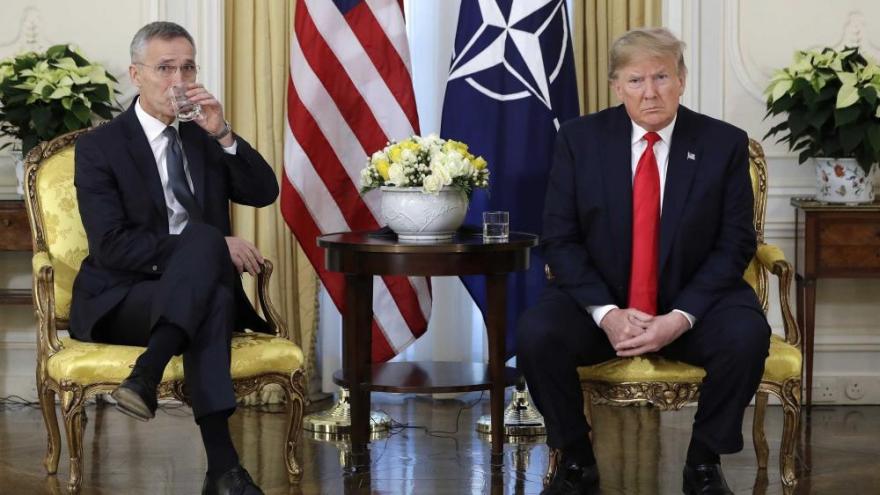 President Donald Trump launched an outspoken attack on Emmanuel Macron ahead of their meeting later in London, calling the French President's comment last month that American indifference to the alliance is leading to the "brain death of NATO" -- "very insulting" and "nasty".

(CNN) -- French President Emmanuel Macron made clear he was in no mood to back down following an extraordinary attack from President Donald Trump on Tuesday.

Sitting alongside Trump in London, Macron said he stood by his comments about NATO -- he recently described the long-time coalition as suffering from "brain death" in part due to a lack of US leadership under Trump -- and described the alliance as a "burden we share."

"I know that my statements created some reaction," Macron said in English. "I do stand by [them]."

After trading criticisms earlier in the day, Trump and Macron walked onto the road leading to 10 Downing Street together for a reception hosted by British Prime Minister Boris Johnson, after Macron was apparently given a lift in Trump's motorcade vehicle commonly referred to as "the beast."

But the awkward meeting between the two was evidence of a souring of the relationship between the two leaders. Trump and Macron were once so close that their friendship was regarded as a "bromance." But over the last two years, things have cooled after disagreements on defense, foreign policy, trade and climate change.

There was another tense moment when Trump was asked whether France had committed to taking back foreign fighters from Syria.

Trump said the matter hadn't come up yet but jokingly asked Macron, "Would you like some nice ISIS fighters? I could give them to you. You could take every one you want."

"Let's be serious," Macron said, adding that the number one priority is to defeat ISIS.

Clashes over Turkey and Syria

Macron also asserted that NATO needs "clarifications from the Turkish side" on key defense issues -- such as the purchase of a Russian-made air defense missile system and Turkey's categorization of several Kurdish groups in Syria, including those once supported by the US, as terrorists.

"How is possible to be a member of the alliance ... and to buy the S-400s from the Russians?" Macron asked.

Macron said his understanding was that Turkey was planning to "block all the declarations of the summit if we do not agree of their definition of terrorist organizations" to include Kurdish groups in Northern Syria.

Earlier in an appearance with NATO Secretary General Jens Stoltenberg, Trump appeared to side with Turkey's President Recep Tayyip Erdogan over his actions in Syria, saying that the country was "very helpful" with the raid to kill ISIS leader Abu Bakr al-Baghdadi. He added that Turkey "could not have been nicer, could not have been more supportive."

"I like Turkey and I get along very well with the President ... I would hope that he's a very good member of NATO," Trump said, adding that he may meet with Erdogan, though a bilateral meeting has not been announced.

"I think we get along with Russia," Trump said, pointing to Macron and saying that he has a similar view.

But later, Macron said that while it is "important to have a strategic dialogue with Russia," leaders "must do so without naïveté."

Overall, Trump seemed to be attempting to strike a softer tone than earlier in the day and said that the the two leaders "have a minor dispute" on trade -- just hours after slamming the the French President.

"We'll probably be able to work it out," Trump said during his meeting with Macron.

Trump was complimentary of Macron, saying that they have accomplished "a lot of good things together as partners."

But before meeting Macron, Trump ripped into the French President over France's new tax on technology companies, which the US says will disproportionately impact American businesses.

Trump also complained that the US pays "a disproportionate amount," and that the US is the country that benefits least from NATO membership.

Trump's remarks highlighted the widening fissures within NATO as leaders gather in the British capital to celebrate the alliance's 70th anniversary.

"When France makes a statement like they did about NATO, it's a very dangerous statement to make," Trump said earlier Tuesday morning as he made remarks and took questions ahead of a meeting with Stoltenberg.

"I do see France breaking off (from NATO). I'm looking at him and I'm saying he needs protection more than anybody and I see him breaking off, so I'm a little surprised at that," Trump added.

Trump kicked off his official meetings in London Tuesday with Stoltenberg speaking for nearly an hour in front of press.

Trump said that he has a good relationship with Kim Jong Un, adding that he hopes the North Korean leader "lives up to the agreement."

The US President was asked about ongoing trade deal talks with China. Though a preliminary agreement was due to have been signed now, Trump said that he thinks it may be better to wait until after the election to make a trade deal.

The President also appeared to be preoccupied by his political troubles at home as Democrats ramp up the pressure in their impeachment inquiry, calling the inquiry a "hoax" and a "waste of time."

Between meetings with Stoltenberg and Macron, Trump attended a lucrative fundraiser for American supporters living abroad. The event was expected to raise some $3 million, according to the Trump campaign.

At an afternoon meeting with Canadian Prime Minister Justin Trudeau, Trump announced that the upcoming G7 will be held at Camp David.

He was asked at the meeting whether he was satisfied with Canadian defense spending levels.

Before ending his day with the reception at Downing Street Trump had tea with Prince Charles and attended another reception hosted by Queen Elizabeth II.

Trump said earlier Tuesday that he plans to meet with Johnson, but it's unclear whether they'll meet one-on-one.