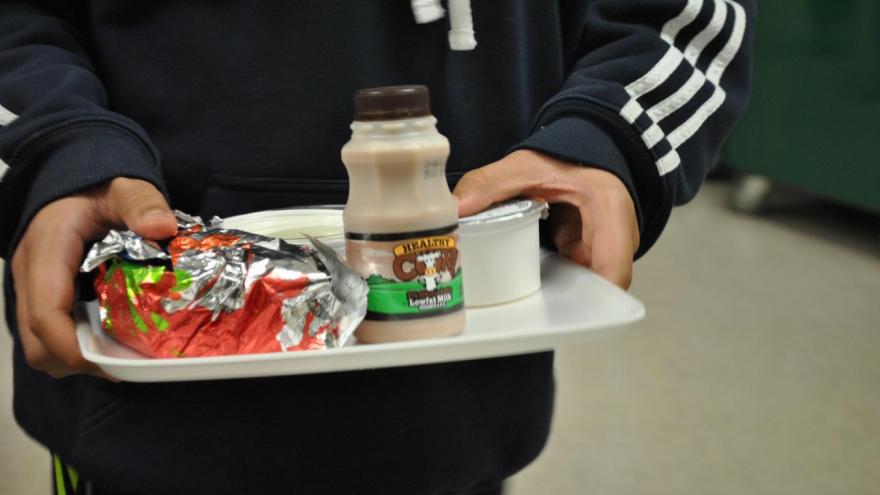 A New Jersey school district has become a lightning rod for criticism because of a policy that would allow school administrators to ban students from school activities if they owed the district lunch money. (FILE)

(CNN) -- A New Jersey school district has become a lightning rod for criticism because of a policy that would allow school administrators to ban students from school activities if they owed the district lunch money.

The policy, which was passed earlier this month in Cherry Hill, has been the target of tweets by several Democratic presidential hopefuls.

"This is cruel and punitive," Democratic candidates Elizabeth Warren tweeted this week, linking to an article on the policy. "Every kid needs and deserves a nutritious meal in order to learn at school." Warren went on to say she had a plan to increase funding and reduce meal debts.

"No child should go hungry at school—period," he wrote, linking to another article about Cherry Hill. "As president, I will fight for universal free school lunch and relieve all school debt."

Joe Meloche, Cherry Hill Public Schools' superintendent, said in a statement that none of his students are going hungry.

"In Cherry Hill, all children who get in line for lunch are provided the lunch of their choice, regardless of whether they have money for it or not," Meloche said. "All children are fed."

According to Meloche, the policy allows school principals discretion to withhold privileges "such as pool parties and trips to amusement parks" from students who owe lunch money. "This is not an automatic step," he wrote.

Meloche called the policy "and extreme outlier" in the state, as the district would not be withholding food. By statute, New Jersey schools are instructed that meals "shall not be served" to a student who is more than three weeks in arrears, provided a parent or guardian has been given proper notice.

The policy shift gained national attention after an area businessman offered to pay down the district's lunch debt on Facebook, and said he was told donations were not being accepted. In a statement, Meloche said an explicit offer to the district was never made, and that he has been unable to make contact with the businessman in question.

On Sunday, Democratic presidential candidate Bernie Sanders linked to a story on the hubbub in Cherry Hill, tweeting, "'School lunch debt' is not a phrase that should exist."

The phrase, however, is very real. And data from the School Nutrition Association, a non-profit professional organization for school food service workers, indicates that the debt is growing.

Of the 792 districts that participated in the SNA's 2019 survey, 75% reported having had unpaid student meal debt at the end of the most recent school year. And while that figure has remained relatively steady over the past four years, according to the SNA, the amount of debt in those districts has grown. The median amount of school district meal debt now stands at $3,400, a 70% increase over the organization's 2013 figures.

"The real unfortunate thing is there is just no revenue source," Diane Pratt-Heavner, an SNA spokesperson, told CNN.

The US Department of Agriculture funds school meal programs, partially funding all meals and fully subsidizing meals for those enrolled in the department's free meal program. The department requires districts seek to recover owed money and prevents them from using any of the funding to pay down debt.

"The federal government made it very clear that districts can't pay off meal debt with federal funds," Pratt-Heavner said. "Part of the problem is school food services are not awash in funding."

Nationwide, about two thirds of districts with debt managed to pay some of it down last year, the SNA's data indicate. More than half of that is made possible by charitable contributions. Payments from the families who owed the debt made up only 22% of the debt paid down last year.

Meloche rejects the implication that Cherry Hill is an example of the national issue.

Meloche added that Cherry Hill got rid of $25,000 in meal debt two years ago. In August, Meloche wrote a letter to New Jersey's governor, Phil Murphy, in which he implored the governor to remove the "shall not be served" clause from the state statute.

The governor voiced support for reform this week, tweeting, "I am committed to working with the Legislature to protect students from stigma and punishment over lunch debt."