Lunar New Year 2021: Ushering in the Year of the Ox 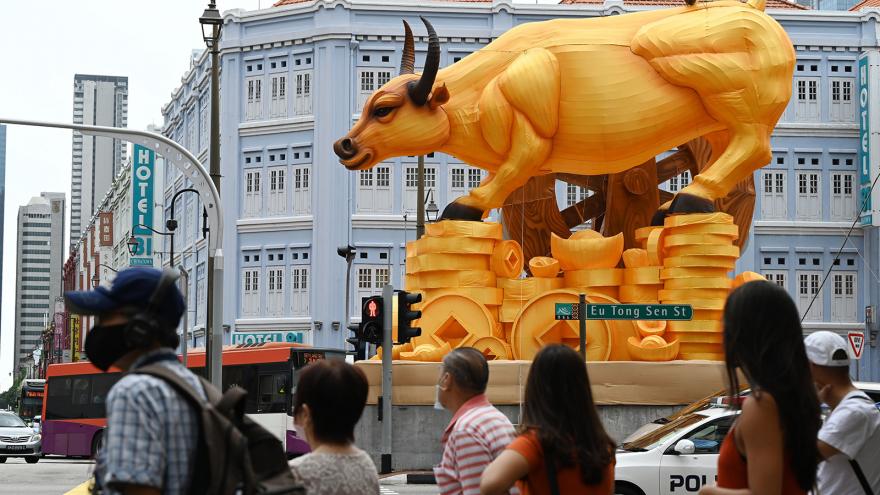 (CNN) -- Though parties and travel may be discouraged in much of the world right now as Covid-19 casts a shadow over Lunar New Year for the second year in a row, that doesn't mean there aren't ways we can still mark the occasion.

Here's your guide to the 15-day Lunar New Year/Spring Festival celebration and all it involves.

Year of the Metal Ox

While you may have heard of the 12-year Chinese zodiac calendar, represented by 12 different animals, it's actually far more complicated.

A year isn't just categorized by its zodiac animal. There's also a complex sexagenary cycle -- a combination of one of 10 heavenly stems and one of 12 earthly branches.

For example, February 12 marks the beginning of the xin chou year, according to the sexagenary cycle. "Xin" represents the heavenly stem for the element metal, while "chou" is the earthly branch symbol for ox, making it the Year of the Metal Ox.

We asked Thierry Chow, a Hong Kong-based feng shui master, to share her thoughts on what this means for the year ahead.

"The year of xin chou will have a strong emphasis on the yin metal element," she says. "The metal element represents anything sparkly from jewelry to the needle of a syringe. So we can see a bigger emphasis on industries related to metal in 2021.

"The ox, in Chinese culture, is a hardworking zodiac sign. It usually signifies movements so, hopefully, the world willbe less static than last year and get moving again in the second half of the year."

Many people take the 60-year calendar very seriously and believe each person's own birth sign will be affected differently by the year's heavenly stems and earthly branches. So the calendar plays an important role in making huge life decisions for the year ahead, such as whether they should get married or start a business.

Followers believe that for each of the Chinese zodiac signs, luck will depend largely on the positions of the Tai Sui -- the stars directly opposite Jupiter.

If your zodiac sign clashes with Tai Sui -- aka the Grand Duke of Jupiter -- in a particular year, you might find yourself dealing with disruptions.

"People born in the Year of the Ox will be facing their 'Ben Ming Nian' -- your own zodiac year," says Chow. "So there will be more changes and instability in general."

A few other zodiac signs will also be clashing with Tai Su in various ways, she adds. (Find your sign here.) Dragons may deal with challenging friendships, while people born in the Horse and Dog years may deal with more gossip and unexpected matters.

People born in the Year of the Goat will be facing Tai Sui (Ying Tai Sui) this year, "meaning there must be a massive change ahead of them," says Chow.

That said, followers believe there are ways to improve your luck.

"Some people will resolve their clashes with Tai Sui by taking part in celebrations, like getting married or going to positive events more," says Chow.

But the feng shui master is quick to remind us that this is only a general overview of what the year means for each zodiac animal. In Chinese geomancy, each person's birthday chart is composed of a wide range of elements such as the day and time of their birth, meaning they may interact with the year a bit differently.

The pandemic has forced many to change the way they celebrate Lunar New Year.

In China, many preparations and celebrations are expected to be done virtually as the government has asked its citizens not to travel home to prevent the spread of Covid-19.

In response, some tourist sites are offering free entry for those forced to spend the holiday away from their families. Meanwhile, companies have launched tools for people to have a "cloud lunar new year," providing everything from virtual markets to conference tools for online reunion dinners.

But no matter how one celebrates, there's a lot of preparation involved if you want to follow the Lunar New Year rule book.

It all begins about a week ahead of the new year.

On the 26th day of the last lunar month -- February 7 this year -- festive cakes and puddings are made. The word for cakes and puddings is "gao" in Mandarin or "go" in Cantonese, which sounds the same as tall, meaning improvements and growth for the next year.

The big cleansing is done on the 28th day, which is February 9 this year.

Normally, Lunar New Year fairs will be set up during the last days of the lunar year, most selling trinkets and flowers for the new year. But because of the pandemic, many cities have downsized or canceled their festivities.

The year usually wraps up with a big family reunion dinner on Lunar New Year's Eve, which falls on February 11 this year.

The menu is carefully chosen to include dishes associated with luck, including fish (the Chinese word for it sounds like the word for "surplus"), puddings (symbolizes advancement) and foods that look like gold ingots (like dumplings).

After the feast, families will stay up past midnight to welcome in the new year.

Though many Western nations refer to the Lunar New Year/Spring Festival holiday as Chinese New Year, bear in mind it's celebrated not just in Chinese communities all over the world but other Asian nations such as Vietnam and South Korea.

Countries that observe Lunar New Year often offer three to seven days of public holidays but celebrations aren't complete until the 15th day of the first lunar month, also known as the Lantern Festival. (Lunar New Year in 2021 lasts from February 12 to February 26.)

Families tend to have different sets of rules and traditions, but most will bless each other with auspicious words like "san tai gin hong" or "shen ti jian kang" (wish you good health).

During normal times, when people aren't in lockdown, they're expected to visit relatives and friends during the festival -- except for the third day of the month. Day three of Lunar New Year (which falls on Valentine's Day this year) is named chi kou, or red mouth. It is believed that arguments are more likely to happen on this day so people will visit temples and avoid social interactions.

There are plenty of other rules and superstitions attached to the Lunar New Year. For instance, don't wash or cut your hair on the first day of the new year. The Chinese character for hair is the first character in the word for prosper. Therefore washing or cutting it off is seen as washing your fortune away.

You'll also want to avoid purchasing footwear for the entire lunar month, as the term for shoes (haai) sounds like losing and sighing in Cantonese.

Do, however, wear red. It's associated with luck and prosperity. (Read more Lunar New Year dos and don'ts here.)

Throughout the festival, hosts will prepare candy boxes and snacks for their guests. Married couples are expected to hand out red packets filled with money to children and unmarried adults to wish them luck.

The seventh day (February 18) is said to be the day when the Chinese mother goddess Nuwa created mankind and, thus, is called renri (the people's birthday).

Different communities in Asia will serve different birthday foods on that day. For instance, people in Malaysia enjoy yeesang, or a "Prosperity Toss" of raw fish and shredded vegetables whereas Cantonese people will eat sweet rice balls.

The highlight comes on the last day (February 26). In ancient Chinese society, it was the only day when young girls could go out to admire lanterns and meet boys. Thus, it's also been dubbed Chinese Valentine's Day.

Nowadays, cities around the world still put on massive lantern displays and fairs on the final day of the festival.

Some create more sparks than others. In China, the small town of Nuanquan puts on a spectacular "fireworks" show by throwing molten metal against a cold stone city wall.