LSU, Ohio State, Clemson and Oklahoma will battle in the College Football Playoff 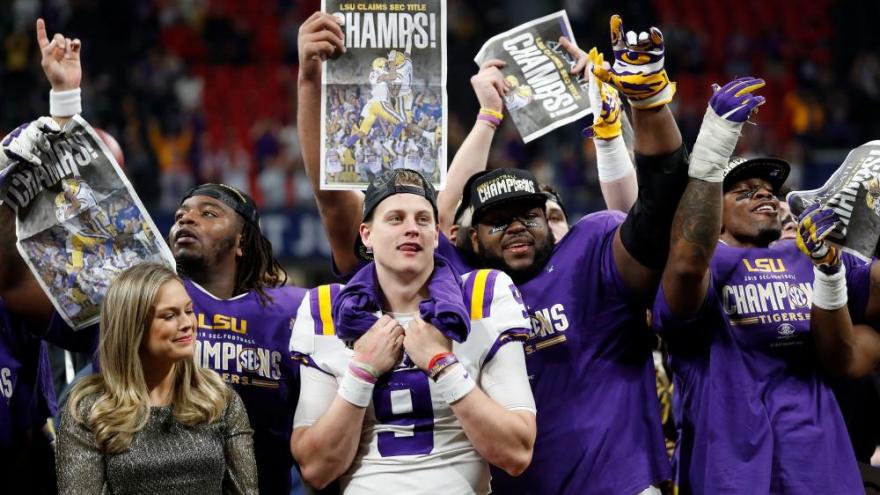 The top four teams in the playoff field are LSU, Ohio State, Clemson and Oklahoma, in that order, the selection committee announced. The national championship game is January 13 at the Mercedes-Benz Superdome in New Orleans.

The top four teams in the playoff field are LSU, Ohio State, Clemson and Oklahoma, in that order, the selection committee announced Sunday.

In the semifinals, LSU (13-0) will face Oklahoma (12-1) at the Chick-fil-A Peach Bowl at Mercedes-Benz Stadium in Atlanta, while Ohio State (13-0) will take on Clemson (13-0) at the PlayStation Fiesta Bowl at State Farm Stadium in Glendale, Arizona. Both of those games will be December 28, with the Peach Bowl scheduled for 4 p.m. ET and the Fiesta Bowl at 8 p.m. ET.

The national championship game is January 13 at the Mercedes-Benz Superdome in New Orleans.

Before Sunday's reveal, the top four teams in the ranking had been Ohio State, LSU, Clemson and Georgia. Fifth through seventh were Utah, Oklahoma and Baylor, respectively.

The landscape started shifting Friday night, when Utah lost to Oregon in the Pac-12 title game. Then on Saturday Oklahoma beat Baylor to win the Big 12 title. Later that day the Sooners got some help from LSU when the Tigers dominated Georgia to win the SEC championship.

Ohio State had to come from behind to defeat Wisconsin and win the Big Ten championship, while Clemson routed Virginia to win the ACC title.

In an interview with ESPN, LSU head coach Ed Orgeron was asked how badly he wanted the No. 1 seed.

"You know, it didn't matter to us," Orgeron said. "Anytime, anywhere, anybody, we're ready to play."

The two star QBs who grew up 20 miles apart

This marks the fifth consecutive appearance in the playoff for Clemson, the defending national champion.

It's Ohio State's third playoff appearance. The Buckeyes, as the No. 4 seed, won the inaugural playoff in the 2014-2015 season.

This will be the fourth matchup between Clemson and Ohio State -- all coming in bowl games. Clemson has won all three of the previous meetings, including a 31-0 blowout of the Buckeyes in the 2016 Fiesta Bowl semifinal.

There's also this interesting storyline: The quarterbacks for these teams grew up roughly 20 miles from each other in Georgia.

Clemson's Trevor Lawrence is from Cartersville, while Ohio State's Justin Fields' home town is Kennesaw. When they were in high school, they were considered the top two quarterback recruits in the nation for the class of 2018.

"It's kind of crazy that you've got these two kids right here from Georgia, and now we've got to go all the way out to Arizona to play the game," Clemson head coach Dabo Swinney told ESPN. "It'll be exciting."

Last year, as a true freshman, Lawrence started the season as Clemson's backup quarterback. But Swinney made him the starter in the team's fifth game of the season and the Tigers went on to win the national title.

Fields, meanwhile, started his collegiate career at Georgia, sitting behind Bulldogs starter Jake Fromm in the 2018 season as a freshman. After seeing little time on the field, Fields transferred to Ohio State in the offseason.

"I think it's going to be a great matchup," Ohio State head coach Ryan Day said to ESPN. "Trevor is one of the best quarterbacks in the country. He's done it on the biggest stages. He's done an unbelievable job with his opportunity.

"I'm proud of the way Justin has come along," he added. "This is a guy who came in this year, never having a collegiate start and kind of found his way as the season has gone on. I think he's gotten better and played some big moments and he has showed how competitively tough he is. He's become the leader of our offense."

Oklahoma is the playoff for the third consecutive year and the fourth time overall. It's LSU's first time in the College Football Playoff.

This will be the third meeting between the two teams. The last time the Sooners and Tigers played each other was in January 2004 in the BCS National Championship Game, when LSU defeated Oklahoma 21-14.

The quarterbacks in this one are LSU's Joe Burrow -- who is favored to win the Heisman Trophy -- and Oklahoma's Jalen Hurts.

Hurts, who spent the previous three seasons at Alabama before transferring to Oklahoma, has now reached the College Football Playoff for a fourth time.

When he was with the Crimson Tide, Hurts played in six College Football Playoff games, starting four, and won a national title in the 2017 season.

Burrow graduated in three years from Ohio State. But he didn't get a lot of playing time when he was with the Buckeyes, so he transferred to LSU in 2018. He has flourished since, especially this season.

The College Football Playoff has been around since the 2014 season, replacing the Bowl Championship Series. The playoff teams are selected by a 13-person committee, which ranks teams based on performance, strength of schedule, conference championships won, head-to-head results and comparing results against common opponents.

This marks the first time in the playoff's history that perennial power Alabama hasn't been among the four final teams.