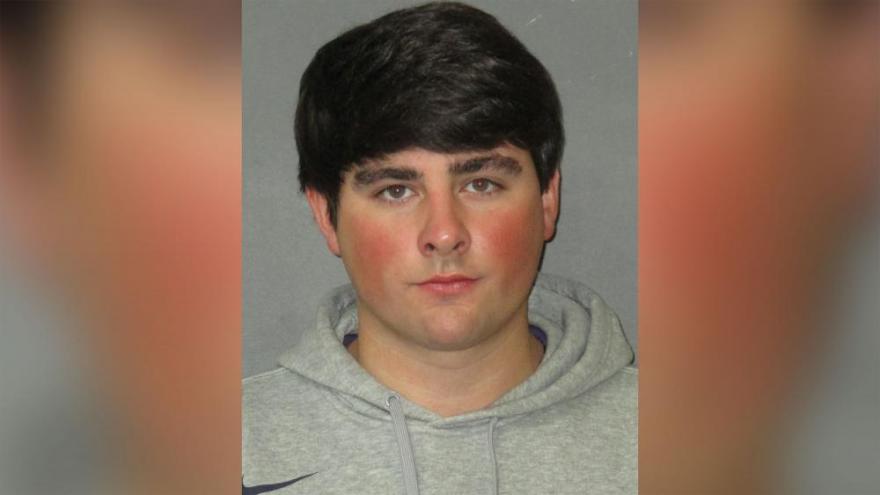 Terry Pat Reynolds II, 21, faces a charge of felony hazing for his role in the incident.

(CNN) -- A fraternity member at Louisiana State University was charged with 13 counts of hazing after police said he forced new members into drinking so much alcohol that their health was endangered, and in one case, leaving the person hospitalized and on life support.

Phi Kappa Psi member Terry Pat Reynolds II, 21, was charged with one count of felony hazing, 12 counts of misdemeanor hazing, and one count of failure to seek assistance, according to an affidavit for the arrest warrant filed by LSU Police.

According to the arrest warrant, an LSU student who was a new fraternity member was dropped off at the hospital by a group of males later identified as Phi Kappa Psi members. The victim had severe alcohol poisoning, was unresponsive and had to be placed on life support, the police affidavit stated.

The arrest warrant affidavit found that Reynolds, the fraternity's "New Member Educator," had given new members "multiple bottles and cans" of alcohol and would not let them leave until they finished.

Reynolds was released from jail on $13,500 bond on Monday, according to CNN affiliate WAFB. In Louisiana, felony hazing comes with a potential prison sentence of up to five years.

CNN has not been able to reach Reynolds and has not confirmed if he has an attorney.

The arrest comes three years after Maxwell Gruver, an 18-year-old LSU student pledging a fraternity, died after an alcohol-related hazing ritual. In that case, a student was found guilty of negligent homicide for his death and sentenced to five years in prison.

Gruver's death led Louisiana Gov. John Bel Edwards to sign into law a set of anti-hazing measures in 2018 that made hazing a felony.

The university said its office of Student Advocacy & Accountability will also conduct an investigation.

"The university has stated on multiple occasions that hazing will not be tolerated and the university acts swiftly when any hazing allegations are brought forth," LSU spokesperson Ernie Ballard said in a statement.

The LSU chapter of the Phi Kappa Psi fraternity did not respond to a request for comment.

Victim had blood-alcohol level of .451

According to the police affidavit, the victim had a frothy pink foam coming from his mouth, an indication of organ failure. Toxicology screenings found that the victim's blood-alcohol level was .451, nearly six times the legal driving limit. The victim was later transferred to the Intensive Care Unit, the affidavit said.

Detectives with the LSU Police Department collected the cell phones of some of the fraternity members and say they learned that Reynolds hosted an event at his off-campus residence where he provided alcohol to new members, which they drank throughout the night.

Reynolds sent a message through a GroupMe composed of mostly new members on Oct. 18, according to the affidavit.

"If you're not doing s*** get over to my place, need a few," the messages stated. "Hope you're ready to get hammered if you pull up."

Police said there were no records of any 911 calls made during the event, even though messages sent via GroupMe indicate the defendant was aware of the conditions of some of the members. According to the affidavit, no one sought help for anyone until someone outside the event saw the victim later that night.

The police investigation found that 18 new fraternity members were associated with the event, including 13 who are considered hazing victims and five who were designated drivers.

A search of Reynolds' residence revealed empty and full alcohol containers in almost every room, the arrest warrant affidavit stated. Police said there were also multiple areas outside the residence that had what appeared to be fresh vomit.