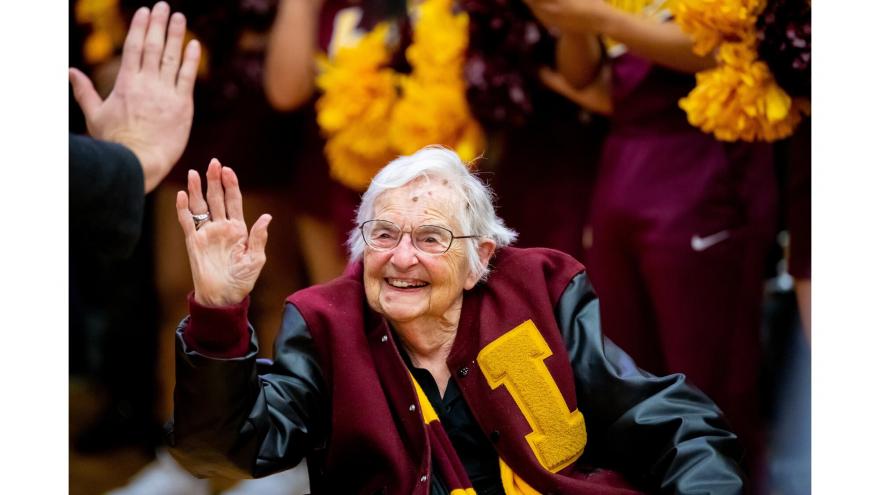 Sister Jean Dolores Schmidt, Chicago's favorite basketball-loving nun, will soon be in the stands after being fully vaccinated.

(CNN) -- In a sign that one small part of March Madness is inching back to normalcy, Chicago's favorite basketball-loving nun will soon be in the stands.

Loyola University Chicago chaplain Sister Jean Dolores Schmidt got the green light from the NCAA to cheer on her beloved Ramblers in person this Friday, but it will be from a distance.

Sister Jean, who is arguably the team's biggest fan and good luck charm, will watch No. 8 seed Loyola tip off against No. 9 seed Georgia Tech in round one of the 2021 March Madness tournament in Indianapolis.

The 101-year-old has been fully vaccinated. She has yet to attend a game this season due to the Covid-19 protocols.

"I'm going to be so excited when I get there. It's a whole year since I've seen them play in a game," Sister Jean told reporters on Tuesday via Zoom.

While she won't be on the court like she's used to, she will be in contact with the team by phone, she said.

Even though Sister Jean hasn't been able to be with the team, she's still making her mark as the team chaplain, said Ryan Haley, the school's assistant director for athletic communications.

The team's director of operations has been calling Sister Jean before each game so she can give her scouting report on the other team and share a prayer with the players, Haley said.

"She'll do the same this weekend," Haley told CNN Tuesday.

The nun reached TV fame during the team's 2018 Cinderella run at the tournament, when cameras showed her pre-game prayer and her cheering from the sidelines in her wheelchair.

When CNN's Coy Wire interviewed Sister Jean during the 2018 postseason, he told her she was a celebrity. "I know," she replied. "That's what they tell me. You probably know, I corrected the reporter the other day. She said, 'You're national.' I said, 'No, we're international.'"

The scene won't be what the sister is used to. Instead, there will be about 2,200 spectators at Hinkle Fieldhouse for Friday's game.

The NCAA is using six sites to host games, limiting the number of fans that attend all rounds of the men's tournament to up to 25% of each arena's capacity, according to the NCAA championship safety overview.

All fans and others on-site must wear masks and practice social distancing, the NCAA said.

People in tiers 1 and 2 will undergo testing before arriving at the game site. Players, coaches, officials, trainers and others who are on the court or on the sidelines are considered in tier 1.

For Loyola's biggest fan, just being there to support the players is reason enough to go.