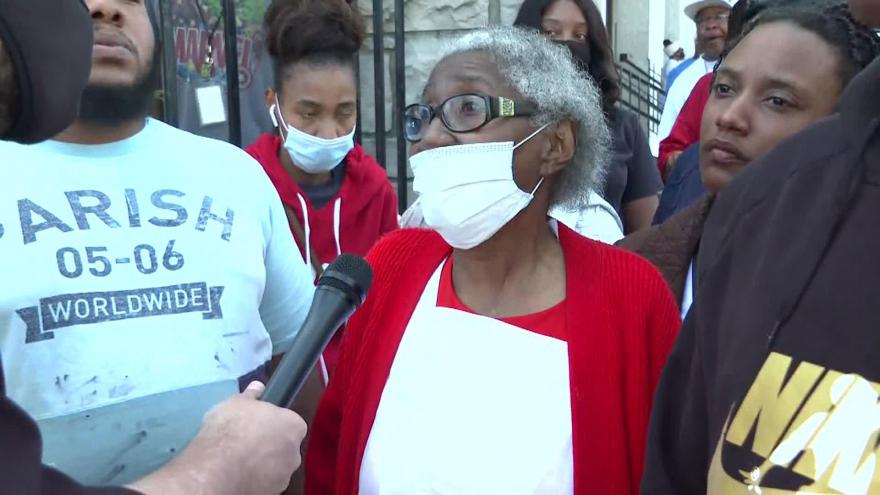 (CNN) -- The police chief of Louisville, Kentucky, has been fired after officials discovered two police officers involved in fatal shooting of a man during a protest over George Floyd's death had not activated their body cameras.

"This type of institutional failure will not be tolerated," Louisville Mayor Greg Fischer said on Monday. "Accordingly, I have relieved Steve Conrad of his duties as chief of Louisville Metro Police Department (LMPD)."

Protests, sometimes violent, have erupted across the nation after Floyd, a 46-year-old Black man, died while being arrested in Minneapolis last week.

In Louisville, the protests have centered on the death of Breonna Taylor, an emergency medical technician who was shot multiple times when three LMPD officers entered her apartment by force to serve a search warrant in a narcotics investigation.

McAtee was shot as police and the National Guard were trying to disperse the protesters, police said Monday. The officials returned fire after they were shot at.

"We lost a wonderful citizen named David McAtee," Fischer said. "David was a friend to many, a well-known Barbecue man."

"They've nurtured so many people in their bellies and in their hearts before, and for him to be caught up in this, not to be with us today is a tragedy."

The Louisville Metro Police Department and National Guard units were sent to clear a large crowd in a parking lot around 12:15 a.m., the police chief said early Monday.

"Officers and soldiers begin to clear the lot and at some point were shot at," Conrad said at a press conference. "Both LMPD and National Guard members returned fire, we have one man dead at the scene."

The Louisville shooting happened in the far western part of the city, where protests hadn't taken place in previous nights.

"Given the seriousness of the situation, I have authorized the Kentucky State Police to independently investigate the event," Beshear said in a statement.

Russell Coleman, US Attorney for the Western District of Kentucky, also said on Twitter his office has started an investigation, which will be carried out alongside the FBI Louisville office and state police.

Odessa Riley, a woman who was at the scene Monday, told CNN the shooting victim was her 53-year-old son.

"They killed him for no reason," Riley said through tears.

Riley said she got a call a little after 1 a.m. that her son had been shot and killed, and she came to the scene and had been there since.

"All I want to do is just see my son before they bring him out, that's all I want." Riley said. She said she hasn't heard anything from the police and was told to wait for the coroner.

McAtee, nicknamed "Yaya," was "trying to make an honest dollar to take care of his rent and his bills," Riley said. "And they gonna shoot him down like a dog, uh, uh, I don't appreciate that."

McAtee had told his mother that he fed police officers at the restaurant.

Mayor Greg Fischer met briefly with Riley Monday where she stood in the crowd, close to where McAtee was killed.

Fischer prayed for her, Riley said, and "I broke down and started crying, but he, the Mayor Fischer, he's a good person."

Peace, not violence, is what she wants, Riley said.

"The protesting is good, protest, for the other people to get what they deserve to," Riley said. "They killed my son. My son don't mess with nobody."

"My son didn't do nothing," she said.

Investigators are interviewing several people "of interest" and collecting video from the scene of the shooting, the police chief said.

More information is expected to be released Tuesday, Conrad said.

Last week, seven people were shot in the downtown area in protests related to Taylor's death after audio was released of Taylor's boyfriend's call to 911 the day of her death. Fischer said the shots came from the crowd, not the police.