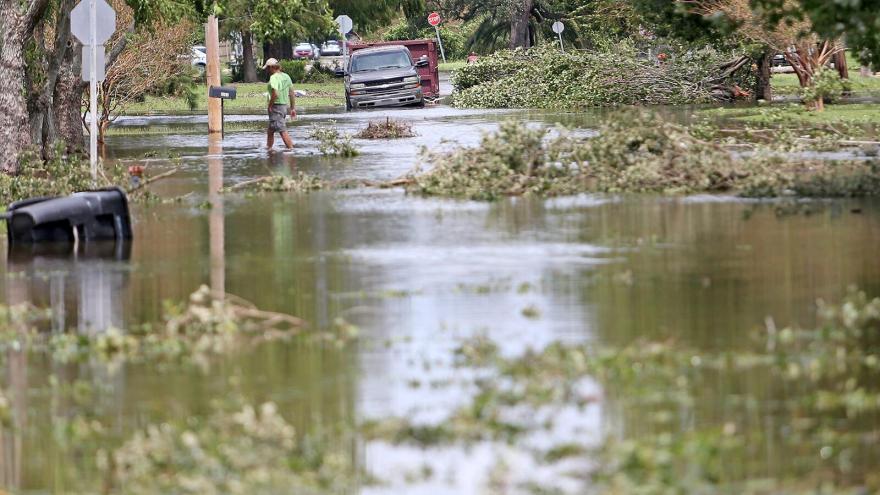 A man walks through the flooded streets in the Lakeview neighborhood of New Orleans in August 2021. Louisiana state officials have delayed flood funding to New Orleans for a second time over city officials' stance on abortion.

(CNN) -- Louisiana's State Bond Commission denied funding Thursday for a $39 million infrastructure project in Orleans Parish for the second time, at the behest of state Attorney General Jeff Landry, according to a statement on Landry's official Facebook page and video posted from the bond commission meeting.

Landry urged the commission to deny the funding in both instances due to a New Orleans City Council resolution encouraging area law enforcement not to enforce the state's abortion ban within their respective jurisdictions.

The project, titled "New Sewerage and Water Board Power Plant, Planning and Construction" is intended to protect New Orleans streets from floodwaters during storms and be completed in 2024.

The Louisiana ban, which has been battled over in court, outlawed abortion outright, with no exemptions for rape or incest-- and is currently in force, CNN previously reported.

In a July 19 letter, Landry asked the bond commission to pause any funding benefiting the city of New Orleans because of city leadership's opposition to enforcing the state law banning abortion.

"In light of the City's open defiance of the will of the people of Louisiana, I urge the Bond Commission to defer any applications for the City of New Orleans, Orleans Parish, and any local governmental entity or political subdivision under its purview," Landry wrote in the July letter.

"In addition, any other funding that will directly benefit the City of New Orleans should also be paused until such time as the Council, Mayor, Chief of Police, Sheriff, and District Attorney have met with and affirmed that they will comply with and enforce the laws of this State and cooperate with any State officials who may be called upon to enforce them."

According to the minutes from the commission's July 21 meeting, a representative from Landry's office motioned to defer the sewerage and water board project from the agenda item and approve the remaining projects.

The motion was approved without objection, according to the minutes.

New Orleans Mayor LaToya Cantrell responded to the motion in a news release saying it is "disappointing and appalling" the commission halted funding for one of the most "vital and valuable" infrastructure projects.

"Regardless of the outcome, my administration will continue to prioritize the needs of our residents, which includes improving our aging infrastructure, strengthening our resiliency as a city, and protecting the reproductive rights of women throughout the City of New Orleans," Cantrell said in the release.

On August 18, the bond commission met a second time to vote on the flood funding, and for a second time, and again at Landry's urging, voted 7-6 to defer the motion for funding until next month, according to video of the meeting.

"The officials in New Orleans took an oath of office to support and enforce the laws of our State, yet they have decided that some laws are not worthy of enforcement," Landry said in a statement following Thursday's vote.

"In light of the City's open defiance of the will of the people of Louisiana, I continue to my efforts on the State Bond Commission. Today was another step toward ensuring the parishes and municipalities of our State comply with the laws of our State," the state attorney general said in a Facebook post.

On Friday, Mayor Cantrell told CNN's Alex Marquardt she will not reconsider her stance on abortion. Withholding or redirecting any resources for infrastructure impacts both state and local economies, Cantrell said.

"We cannot afford to put politics over the rights of people, and particularly safeguarding people from hurricanes and other disasters, because we are on the front lines of climate change," Cantrell said on CNN.