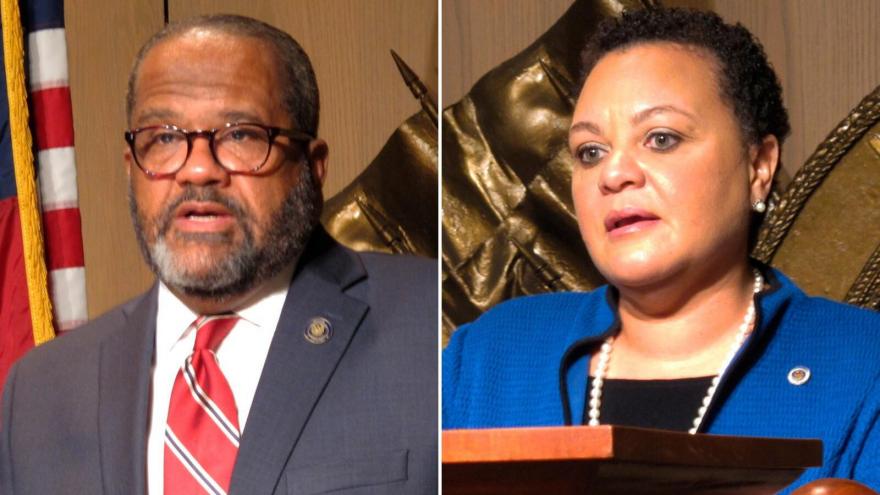 (CNN) -- Louisiana voters are set to weigh in on the direction of the Democratic Party, choosing between a more moderate candidate who is aligned with President Joe Biden's White House and a more progressive contender who could make history as the first Black woman to represent the state in Congress, in a Saturday runoff election.

The election won't alter the balance of power in Congress -- though it will fill a seat that's been vacant for months, giving majority Democrats slightly more breathing room. But it will serve as a gauge of the direction of the party more than three months into Biden's tenure, with voters in the largely Black congressional district choosing between two divergent approaches to politics and deciding how much gender is a factor.

A debate Thursday night hosted by WWL-TV in New Orleans, in which candidates appeared virtually, showcased their different approaches, with Peterson criticizing Carter for seeking the endorsement of a Republican political action committee and pointing out that Louisiana Republicans have not accepted the legitimacy of Biden's victory against former President Donald Trump the November 2020 presidential election.

"There will be times when I can work with Republicans, but I am not going to compromise my values on 'Medicare for All,' the Green New Deal, criminal justice reform, passing the George Floyd Act," Peterson said.

Carter called Peterson's comments "divisive," and said he is willing to work with Republicans.

"I will stand for those Democratic ideals that I believe in. I will fight for them until the end. But I will also come to the table to compromise to make sure that I bring resources home for the people of Louisiana," he said. "This notion that we can't work together so we draw a line in the sand, and Democrats are devils to Republicans and Republicans are devils to Democrats -- that's counterproductive."

The winner will become the only Democrat in Louisiana's congressional delegation, representing a district that stretches from Baton Rouge to New Orleans. If she wins, Peterson would also become the first Black woman to represent Louisiana in Congress.

Carter and Peterson were the top-two finishers in a 15-candidate March primary, with Carter receiving 36% of the vote and Peterson earning 23%. The third-place finisher, progressive activist Gary Chambers -- the only other candidate with double-digit support, at 21% -- endorsed Peterson, calling her "a progressive fighter" and touting her support for Medicare for All, the Green New Deal and a $15-and-hour minimum wage.

Both are long-time veterans of Louisiana politics. Peterson is a veteran legislator who spent eight years as the state's Democratic Party chairwoman, while Carter is also a state lawmaker and former New Orleans city councilman.

The race is the latest chapter in a political rivalry that has brewed for decades -- and one that includes facing each other in a previous congressional election. In 2006, both ran against then-Rep. William Jefferson, a Democrat who at the time was under investigation for corruption and would later be convicted. Peterson finished second in the primary and Carter a distant fifth. In Louisiana, the top-two primary finishers advance to a runoff. Peterson lost to Jefferson in the general election.

Carter has been more comfortable embracing the establishment banner, casting himself as an effective legislator and touting his endorsements from Richmond, South Carolina Rep. Jim Clyburn, Louisiana teachers' unions, and the Greater New Orleans AFL-CIO.

Even before joining Biden's White House, Richmond was close to the President. He was a co-chair of his 2020 campaign and his transition team, and was a close adviser who was frequently on-hand for Biden events and served as a surrogate for his campaign. The race is a test of Richmond's own influence -- he served in the seat for a decade -- and of whether voters are persuaded by Carter having a direct line to the White House through the former congressman.

Carter and Peterson have clashed in recent weeks over questions about policing and whether to defund police forces in the wake of a Minnesota jury's conviction of Derek Chauvin, the police officer who killed George Floyd last year.

Peterson has criticized Carter's position on policing, pointing in a recent debate to a resolution he sponsored last year that expressed support for police and opposition to defunding the police as "tone deaf."

"We need to address the epidemic of police violence in our communities," Peterson said in an earlier debate. "We can't just reform the police. We need to reimagine public safety."

Carter said that "we shouldn't defund, we should smart-fund" police, advocating for reforms such as de-escalation training, deeper background checks on potential officers and those already on police forces, camera vests and social media monitoring of officers.

"All police officers are not bad. But the ones that are bad, we have to find and we have to get rid of them," Carter said.

Peterson did not vote last year on the resolution she criticized, saying she was absent from the state Senate floor because majority Republicans were not enforcing mask mandates.

"In the midst of the George Floyd killing, a resolution to address police and protecting the police, at a time when Black people are dying, was tone-deaf," she said. "I'm proud to have the endorsement of Black Lives Matter. I'm proud to support a complete restructuring of the public safety system. This system wasn't built to protect Black and brown people."