Louisiana must prepare for Zeta while still recovering from two hurricanes, governor says 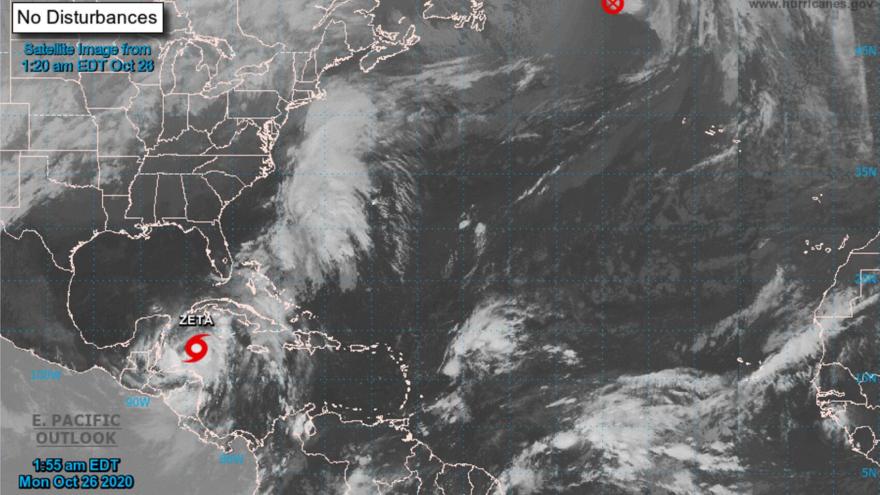 A NOAA map of Tropical Storm Zeta entering the Gulf of Mexico.

(CNN) -- With Hurricane Zeta approaching the Gulf Coast, Louisiana is preparing for potential impact while still working to repair the damage from Hurricanes Laura and Delta.

"We must roll up our sleeves, like we always do, and prepare for a potential impact to Louisiana," said Gov. John Bel Edwards.

It has been a very active hurricane season, and it could be record setting for Louisiana. Zeta is forecast to reach the state at or near hurricane strength Wednesday -- and if it does, it will set the record for most named storms in the state in one season.

It would be the fifth, following Cristobal, Laura, Marco, and Delta. Zeta would also bring Louisiana to tie with Florida in 2005 as the most landfalls in any state in one season.

"This storm is expected to make landfall somewhere on the Gulf Coast by midweek, meaning we have a few days to prepare. As we've seen this hurricane season, a tropical threat during the ongoing COVID-19 emergency is challenging, but something we can handle," Edwards said in a tweet.

As of Monday afternoon, Zeta was still about 100 miles southeast of Cozumel, Mexico and moving to the northwest at 10 mph. Maximum sustained winds are now 80 mph, making Zeta the 11th hurricane of the hyperactive season.

"While the current NHC forecast indicates that the system should weaken below hurricane strength before landfall, users are reminded that strong tropical storms can still produce significant storm surge, rainfall, and wind impacts along the northern Gulf Coast" the National Hurricane Center said Sunday.

And the area is still reeling from back to back storms.

Hurricane Laura struck as the strongest storm in Louisiana since 1856 in late August. In Louisiana and Texas, the storm destroyed homes and structures in its path and killed at least 25 people. More than 8,000 Hurricane Laura evacuees were in shelters six weeks later when Delta struck, Edwards said.

Hurricane Delta left a trail of "hazards like flooded roads, downed power lines and displaced wildlife" across the state, Edwards tweeted at the time. The storm killed at least four people, spawned more than 10 tornado reports from the Gulf Coast to the Carolinas, and covered part of Louisiana in more than 17 inches of rain.

"Even if it wasn't quite as powerful as Hurricane Laura, it was much bigger," Edwards said of Delta. "Obviously, this was a very serious, very large and powerful storm that produced significant amounts of damage."

Zeta is the 27th named storm of the 2020 Atlantic Hurricane season, tying a record set in 2005 for named storms, according to the National Weather Service.