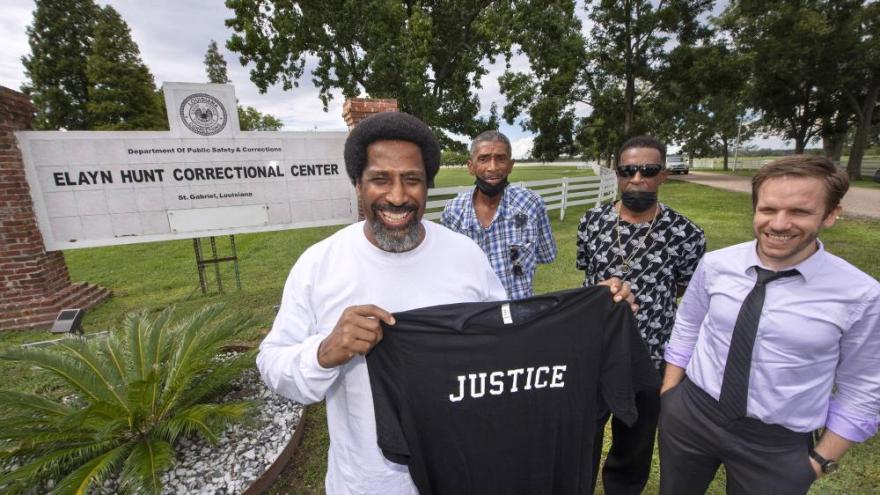 Sullivan Walter has been exonerated after spending more than 36 years in jail for rape.

(CNN) -- A Louisiana man has been exonerated after spending more than 36 years in jail for rape, according to court documents.

Sullivan Walter, now 53, was "exonerated after 36 years, 1 month, and 30 days incarcerated for a rape he did not commit," Innocence Project New Orleans (IPNO) said in an Instagram post.

Walter was 17 years old when he was arrested, but "was prosecuted as an adult," IPNO said in a press release Thursday. "This is the longest known wrongful incarceration of a juvenile in Louisiana history and the fifth longest in U.S. history," it added in their social media post.

In September 1986, Walter was charged in connection to a home invasion and rape in New Orleans, according to a motion to vacate his conviction.

According to court documents, a woman identified as "L.S." was taking a shower when she saw a man in her house who was covering his lower face with a washcloth and wearing a backwards baseball cap. The man put a shirt over her face and walked her to an "empty unlit bedroom" at knifepoint and raped her.

The woman told police the man dropped his face covering several times during the crime, and she thought she would be able to identify him. She gave descriptions to investigators and worked with a police sketch artist to make a composite drawing, court documents say.

About a month and-a-half after the rape, Walter was arrested for simple burglary and when police thought he looked like the man L.S. described, a photo array was presented to L.S. and she identified Walter as the rapist, court documents say. Walter was wearing a blue baseball cap in the photo, the same color hat the man who raped her was wearing.

Walter was arrested for the rape and his jury trial lasted one day, according to court documents.

Walter went through numerous appeals, but from 1997 until October 2021, Walter had no legal assistance, court documents say.

After taking on Walter's case in October 2021, IPNO attorneys "discovered that though the serological testing in the 1980s concluded that Mr. Walter was not the perpetrator, the jury that convicted Mr. Walter did not know this," the organization said.

Walter's "trial attorney did not elicit this evidence from witnesses and the police officer analyst misrepresented the results of his testing," according to the IPNO's post.

IPNO presented their findings to the Orleans Parish District Attorney's Office Civil Rights Division (CRD) and together, IPNO and the CRD moved to vacate Walter's conviction, the organization's statement said.

"An expert report... describes problems with the testing in Mr. Walter's case and 'disingenuous at best' police testimony. The report also observes 'systematic deficiencies' in serological testing performed by the NOPD and Coroner's Office during the 1980s and early 1990s and suggests 'a comprehensive review of every case in Orleans Parish in which ABO/secretor test findings and testimony may have figured in the conviction of a defendant,'" the IPNO post added.

In the motion to vacate, Walter's attorneys and the Orleans Parish DA stated concerns about the accuracy of L.S.'s eyewitness identification because she "was being asked to make a cross-racial identification of someone who at all the times that she could observe him was either masked, in an unlit room at night, and/or threatening her not to look at him."

"Under no circumstances should the District Attorney's agreement in this case be taken to infer that the victim was dishonest in her identification nor minimize her and her family's very real trauma from her assault. Rather, it should be recognized that the tragedy of her assault is, in fact, magnified by the fact the true perpetrator was not apprehended and may have victimized others," the motion to vacate Walter's conviction said.

"This is not just about individuals and their choices, but the systems that let them happen," said Walter's attorney, IPNO Legal Director Richard Davis.

Walter's convictions for aggravated burglary, two counts of aggravated crime against nature and one count of being a habitual offender have also been vacated, according to court documents.

L.S. has since died and her family was notified of the problems with the evidence in the case and the need to vacate Walter's conviction, court documents say.

"The Orleans Parish District Attorney's Office is committed to confronting and addressing past harm inflicted by the criminal legal system as part of its mission to create a safer community for all of our citizens. Reckoning with the sins of the past or past harm must include an unbiased and open-minded review of cases in which evidence that was not heard by the jury suggests that a person who was convicted was not the person who committed the crime," Orleans Parish District Attorney Jason Williams told CNN in a statement.

"Sullivan Walter was convicted by a prior administration of this office despite the fact the serology testing by state law enforcement at the time showed he could not have been the person who committed the rape he was convicted of in 1986. After Mr. Walter's trial, a state official -in the face of a serology exclusion indicating the wrong man had been prosecuted -changed his prior sworn testimony to ensure the 17-year-old Mr. Walter remained behind bars," Williams said.

"No such behavior would ever be tolerated in my administration and we could not stand by or defend a conviction obtained or maintained with such methods. Mr. Walter suffered a terrible injustice and, though this office rectified it promptly when it was brought to our attention, it is a tragedy that it took the legal system so long to do so. We are working every day to prevent such avoidable tragedies from happening again," Williams added.