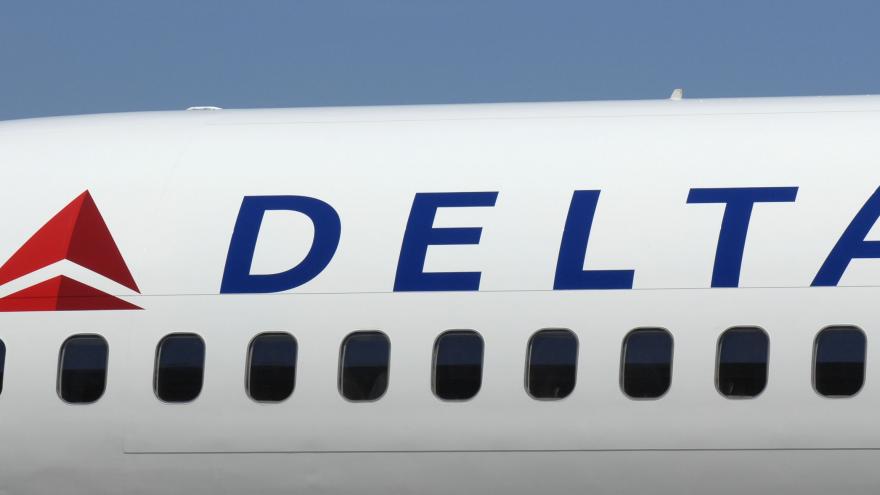 (CNN) -- A Los Angeles woman is facing a federal assault charge after allegedly hitting and spitting on another passenger on a December 23 Delta flight from Tampa to Atlanta.

The incident occurred after the female passenger found the aisle from one of the bathrooms to her seat blocked by a beverage cart. The woman exchanged words with a male passenger, then hit him in the head with a closed fist, according to an unsealed criminal complaint obtained by CNN.

The man told an FBI investigator the woman then spit on his face and head area, the court document says.

Patricia Cornwall, 51, made her initial appearance Monday afternoon in federal court in Atlanta. She is accused of "assault by striking, beating, or wounding R.S.M. in the special aircraft jurisdiction of the United States," the complaint says.

She was not required to, and did not submit, a plea in court during the initial appearance.

If found guilty of the class A misdemeanor, Cornwall could face up to one year in prison and up to a $100,000 fine.

CNN has reached out to the US Attorney's office and Cornwall's attorney, Millie Dunn, for comment but did not immediately receive a response.

The criminal complaint says the FBI task force officer interviewed the male passenger by phone and later watched a cellphone video of the incident.

"It corroborates the information that R.S.M. provided. Additionally, the video shows CORNWALL striking R.S.M. in the face," Rudyard Jarrard, a FBI task force officer based in Atlanta, says in the complaint.

The man said Cornwall was returning from a restroom at the back of Delta Flight 2790 but a flight attendant conducting beverage service blocked the aisle, according to the complaint.

"(Cornwall) responded to the flight attendant, 'What am I Rosa Parks?'" the complaint says.

The male passenger said he "told Cornwall it was an inappropriate comment and that she 'isn't black....this isn't Alabama and this isn't a bus,' " according to the complaint.

The man then purportedly told Cornwall to "sit down Karen," according to the complaint.

The court document says a verbal back and forth ensued, before Cornwall allegedly hit R.S.M. and caused a visible head injury.

Social media video appears to match description of what happened

A video shot on board a plane and posted by "ATL Uncensored" on its social media pages appears to match the description of the incident in the complaint.

In that video, a woman whose mask is below her chin is seen standing in the aisle of a plane yelling at a man to put his mask on. The man responds saying he is eating and doesn't have to, and uses a sexist slur against her. The woman in that video is then seen hitting and spitting on the man.

The Atlanta Police and the FBI declined to confirm that Cornwall is the woman seen in the video, or that it is video of the same incident.

The video referred to in the complaint was taken by an unspecified passenger.

Woman will be allowed to fly home

In court, federal Magistrate Judge Christopher Bly set Cornwall's bond at $20,000 and after an extensive discussion with her attorney, permitted her to return to her home in Los Angeles by plane, if she follows requirements laid out by the judge.

Cornwall won't be flying on Delta though; her attorney confirmed in court proceedings that Delta placed her on a no-fly list.

The judge also mandated that aside from her flight home, Cornwall is not allowed to travel by any interstate commercial carrier -- plane, bus or train -- while out on bail.

Delta spokesperson Grant Myatt confirmed to CNN that Flight 2790 was "met by law enforcement after an unruly customer disturbance during flight."

"Situations like these are rare for the vast majority of our customers and Delta has zero tolerance for unruly behavior at our airports and aboard our aircraft," Myatt told CNN.

The Atlanta Police Department said in a news release officers met the flight at the airport gate and took Cornwall into custody.

Cornwall's attorney confirmed in court that she had been in jail since December 23.