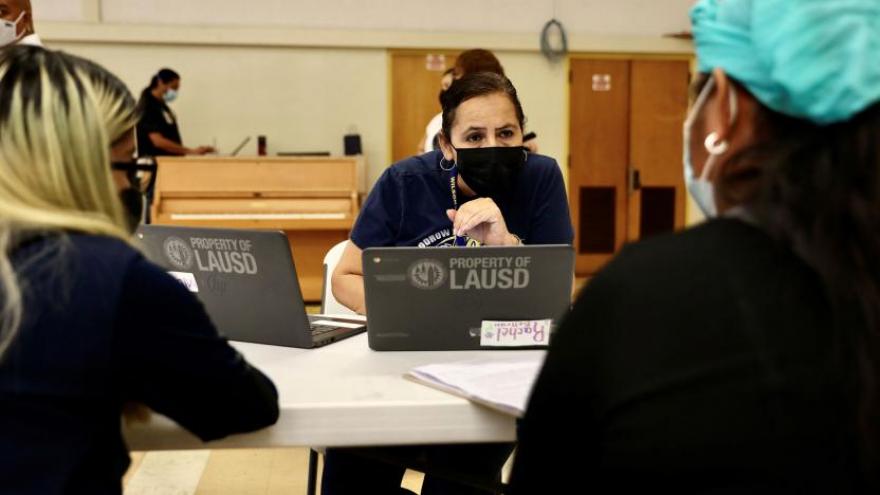 (CNN) -- All eligible students attending Los Angeles Unified public schools -- the nation's second largest school district -- will be required to be vaccinated against Covid-19 by the end of the calendar year, the school board of education has voted.

In a special meeting held Thursday, the Los Angeles Unified School Board decided by unanimous vote that a mandate was appropriate based on the sudden surge of the virus brought about by the Delta variant and data showing lower rates of infection and hospitalization among those who are vaccinated.

The proposal approved Thursday requires all eligible students 12 years of age and older to receive their first Covid-19 vaccine doses by no later than November 21, and to be fully vaccinated by December 19. Students who participate in in-person extracurricular activities, including sports, face an earlier deadline of October 3 for a first dose of the vaccine and a second dose no later than October 31.

The district, which includes more than 600,000 students, already mandates the vaccine for teachers and staff, requires face coverings be worn by all, and tests all students and staff for infections weekly. Classrooms have also been outfitted with enhanced ventilation systems in an effort to decrease the spread of the virus.

Interim Superintendent Megan Reilly estimated there are about 225,000 students 12 and older in the district -- of which about 80,000 are unvaccinated, but she said the health department would have the specific numbers.

In its daily update, Los Angeles County Public Health said more than half of 12- to 17-year-olds in the county are vaccinated.

The mandate will apply to all vaccine eligible students who are attending school in-person and would allow those with "qualified and approved exemptions" to opt out, though the conditions weren't specified.

Students who decline the vaccine and have no exemptions can participate in the online Independent Study Program. About 15,000 students are currently enrolled in the remote learning program, according to board member Tanya Ortiz Franklin.

During the meeting, Reilly framed the vaccine requirement as the best way to ensure children can reap the benefits of learning in-person.

"As the second-largest district in the country, with a richly diverse student population, we know the impact and experiences of Covid-19 are varied amongst our students and our families, and that there are different levels of comfort and discomfort with the vaccine and other Covid-related safety measures," Reilly said.

"Along with these truths, our charge remains clear: to provide students with the best education possible, which includes the many benefits of in-person learning," she said.

Dr. Richard Pan, a state senator, pediatrician, and district parent advocated for the measure, pushing for "community immunity" to protect the kids that are too young to be eligible for the vaccine. He praised LAUSD for "leading the way" and "following the science to ensure schools are safe."

While some parents spoke in favor of the mandate, others angrily denounced the proposal.

"We must be the ones who decide for our children, not the district, not anyone else," admonished parent Carla Franca."If you want to take your own children to the killing fields, you do it, but you are not the one who should be deciding," she said. "When you have your own kids, you can make your own crazy decisions."

"Ultimately, we want our schools to stay open, and the best way to ensure that is to have as many people as possible who are in our schools vaccinated," Cecily Myart-Cruz, the union's president, said in a statement.

"UTLA made this demand at the bargaining table, publicly called for this action, and take pride in continuing to lead on issues of safety in our schools. We urge the district to continue providing greater access, education, and outreach to facilitate increased vaccination numbers in our school communities."

School board member Nick Melvoin urged the board to support the mandate to return kids to a sense of normalcy, limiting the possibility of closing schools to in-person learning again, as some schools have been forced to do in areas with a low vaccination rate.

"It is our moral, ethical, political -- pick a word -- it's our responsibility to protect the children under 12 that cannot get protected any other way," said board member Jackie Goldberg, who spoke in favor of the measure at the meeting, urging all other members to support the proposal as well.

LAUSD, which began school on August 16, would be the first major school district in the United States to mandate Covid-19 vaccines for its eligible students. A smaller district in Los Angeles County, Culver City Unified School District, announced in August it planned to require eligible students to be vaccinated by mid-November.

"We imagine by second semester, our middle school and high school campuses will be absolutely even safer than they are today," LAUSD school board member Tanya Ortiz Franklin told CNN's John Berman on Thursday morning.

LAUSD estimates at least 150,000 doses will need to be administered, Franklin said, but Los Angeles County has the doses and the capability to undertake this effort.

Students who decline to get the vaccine but don't have an exemption can enroll in the district's Independent Study Program, an online resource that already has about 15,000 students who have opted for remote learning for a variety of reasons, Franklin said.

The district is "trying to do everything we possibly can to keep our schools safe," Franklin said, including instituting mask wearing, testing and upgrading schools' air filtration systems.

"Cases are on the rise and children are at risk from the Delta variant in ways we didn't see last semester," she said, "and our responsibility to children and our communities is their safety and well-being."

There were 7,784 positive tests among students and 1,250 staff cases in K-12 schools thoughout the county between August 15 and September 7. The vast majority were at at facilities in the Los Angeles Unified School District, which tests everyone weekly, the health department said.

The vaccine by Pfizer/BioNTech is the only one available in the US authorized for emergency use for children between 12 and 15, though the vaccine has received full approval by the US Food and Drug Administration for people 16 and older.

But that's not an issue for the LAUSD school board, Franklin told CNN, saying, "We understand the benefits far outweigh the risks, and so the emergency authorization really isn't weighing into our decision."

"It is about the access," she added, "and that we can provide it in this country to our children, and we want to do that as quickly as possible."

White House press secretary Jen Psaki praised the move Thursday, telling CNN, "Good for them." But she also said it was important everyone around students were also inoculated to protect students under 12 who remain ineligible for vaccines.