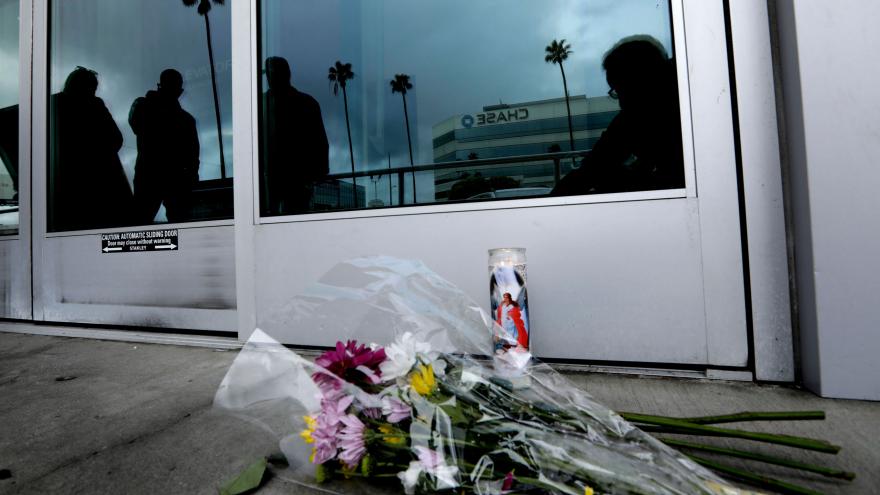 (CNN) -- The 14-year-old girl killed at a California store Thursday when police fired at an assault suspect has been identified as Valentina Orellana-Peralta, the Los Angeles County Medical Examiner's Office told CNN Sunday.

Orellana-Peralta's manner of death is listed as homicide and her cause of death was a gunshot wound to the chest, Coroner records show.

The teen was shot while in a dressing room with her mother at a Burlington store in North Hollywood, the Los Angeles Police Department (LAPD) said.

One of the shots penetrated a wall and struck the girl, Los Angeles Police Department Assistant Chief Dominic Choi said during a news conference Thursday.

"Preliminary, we believe that round was an officer's round," Choi said.

The man suspected in the earlier attack at the store was also shot and killed by police, Choi said. A steel or metal cable lock was found near the man, and investigators believe it was involved in the assault on the woman, he said. No firearm was recovered from the scene.

"This chaotic incident resulting in the death of an innocent child is tragic and devastating for everyone involved. I am profoundly sorry for the loss of this young girl's life and I know there are no words that can relieve the unimaginable pain for the family," he said last week.

According to the timeline provided by the LAPD, North Hollywood police officers responded to a radio call at 11:45 a.m. for an assault with a deadly weapon in progress at a Burlington store on Victory Boulevard.

While en route, they received multiple calls about a "possible shooting in progress" and people were sheltering in place, the LAPD said.

Upon arrival, officers found a female who was bleeding and suffering from various injuries.

The officers then encountered a man suspected in the assault a short distance away and shot at him, the statement said. He was struck by gunfire and declared dead at the scene, authorities said.

Afterward, officers found a hole in the wall behind the man, which turned out to be a changing room. Inside, officers found a 14-year-old girl struck by gunfire and pronounced her dead at the scene, police said.

The woman who was assaulted was transported to a local hospital with head and arm injuries, police said.

Police do not believe there was any relation between the three people.

Per state law, the California Department of Justice is investigating the officer-involved shooting, Attorney General Rob Bonta said in a statement.