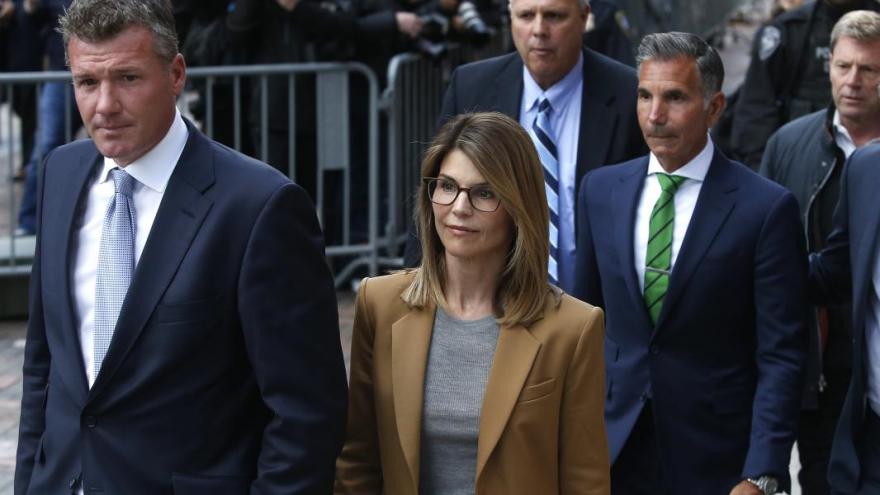 Lori Loughlin and her husband, Mossimo Giannulli, are expected to stand trial starting October 5 on charges related to the college admissions scam, a spokesperson for the US Attorney's Office in Massachusetts said. Loughlin, in tan at center, leaves as her husband Giannulli, in green tie at right, follows behind her outside a courthouse in Boston on April 3, 2019.

(CNN) -- Lori Loughlin and her husband, Mossimo Giannulli, are expected to stand trial starting October 5 on charges related to the college admissions scam, a spokesperson for the US Attorney's Office in Massachusetts said.

Both have pleaded not guilty to the charges.

The eight-defendant trial means Boston's federal courtroom will have row after row of defendants and their legal teams this fall, said Elie Honig, a CNN legal analyst and former federal and state prosecutor.

"A trial with eight defendants is going to take a long time. There's just no way around that," he said. "But (it'll be) a heck of a lot shorter than eight one-defendant trials."

Loughlin and Giannulli allegedly paid $500,000 as part of a scheme with Rick Singer and a University of Southern California athletics official to get their two daughters into the university as members of the crew team, even though they did not participate in crew. As part of the scheme, the parents sent Singer photos of their daughters on an ergometer, a rowing machine, according to the criminal complaint.

Loughlin and Giannulli's daughters were accepted under these false pretenses, prosecutors have said. They are no longer enrolled at the school.

Prosecutors say the $500,000 -- including $100,000 to former USC athletics official Donna Heinel and $400,000 to Singer's fake charity -- constituted illegal bribes. Heinel has pleaded not guilty and repeatedly has declined to comment. Singer has pleaded guilty to several charges and is cooperating with the prosecution in the case.

But attorneys for Loughlin and Giannulli have argued the money was part of a legitimate practice in which universities "regularly solicit donations from the families of prospective students" that can impact the students' chances of admission. They have also accused prosecutors of withholding evidence that they say exonerates their clients.

In a recently released filing, for example, defense attorneys highlighted notes Singer wrote on his iPhone in which he said prosecutors were asking him to tell a "fib" to his clients.

"They continue to ask me to tell a fib and not restate what I told my clients as to where their money was going -- to the program not the coach and that it was a donation and they want it to be a payment," the highly redacted notes in Singer's phone accompanying the motion said.

In a follow-up to that filing, Loughlin and Giannulli's legal team filed a document further criticizing the government's handling of evidence in the case and called for a hearing about the matter. They called the handling of this evidence "egregious prosecutorial misconduct."

How an eight-defendant trial works

Combining multiple defendants into one trial is common and helps save time and resources, Honig said.

In addition, Honig said a full courtroom will show to the jury the sense of importance and significance to the case as opposed to a trial with a lone defendant.

In general, prosecutors prefer to try a larger group of defendants while defense attorneys want their clients to be tried alone or in smaller groups, Honig said, although that depends on the specifics of the case.

"Generally speaking, prosecutors like to give a jury a fuller picture of the conspiracy and who was involved, and it tends to resonate more with the jury if you have more of those people actually on trial actually sitting in the courtroom," he said.

Of course, the judge will instruct the jury that the defendants are to be considered individually and not as a whole. Still, it's an issue that defense attorneys will be sure to emphasize.

"Defense lawyers worry about that. The sweeping verdict where a jury just says 'they're all guilty' without differentiating defendant 1 from defendant 2 from defendant 3," Honig said.