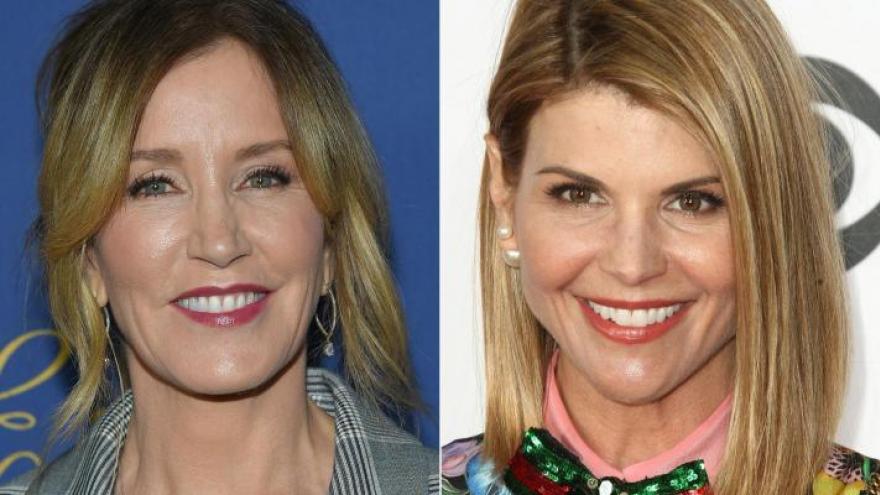 Actresses Lori Loughlin and Felicity Huffman are among 15 people expected to appear in federal court in Boston as part of the college admissions scam.

(CNN) -- With fans screaming "Aunt Becky!" outside a federal courthouse in Boston, "Full House" actress Lori Loughlin, flanked by bodyguards, made an initial court appearance Wednesday as part of the college admissions scam.

Actress Felicity Huffman, another celebrity tied to the scandal, had a more understated arrival, accompanied only by one other person.

The actresses were among a dozen people who appeared Wednesday in federal court over a scheme in which families with money and clout are accused of paying bribes for their children to attend some of the country's most prestigious institutions.

The defendants are each charged with conspiracy to commit mail fraud and honest services mail fraud in what prosecutors have called "Operation Varsity Blues." Authorities say the parents paid a college prep business to cheat on standardized tests and/or bribe college coaches to help get their children into competitive universities.

Huffman arrived at federal court just before noon Wednesday. Loughlin and her husband, fashion designer Mossimo Giannulli, arrived in the early afternoon ahead of the 2:30 p.m. hearing.

In court, they acknowledged their rights, charges and maximum possible penalties. They waived a pretrial hearing, signed conditions of their release and were free to leave.

Huffman's husband, actor William H. Macy, is not charged in the case.

CNN reached out to representatives for Huffman, Loughlin and Giannulli but has not heard back.

The three were among 10 defendants who waived their right to a pretrial hearing Wednesday and were released. Three other defendants who had been expected in court rescheduled their appearances to another date.

In addition, Gregory and Amy Colburn of Palo Alto, California, pleaded not guilty to charges of conspiracy to commit mail fraud and honest services mail fraud and money laundering conspiracy.

Prosecutors will be asking for jail time for all defendants, according to a law enforcement official with knowledge of the investigation.

Loughlin and Huffman are facing anywhere between six to 21 months in prison if convicted or they plead guilty, the official added, though the exact sentence would depend on a combination of factors.

Of the other parents facing charges, between seven to 10 are expected to reach a plea deal by mid-April, according the official.

More arrests aren't expected until a 30-day limit to indict has passed, according to the official. That 30-day window began when the defendants were charged.

Of the 50 people charged in the case, at least five have pleaded guilty or plan to plead guilty, according to prosecutors.

Rick Singer, the mastermind of the scheme; Rudy Meredith, the Yale University women's soccer coach who accepted a bribe to help a student get admitted; and Mark Riddell, who cheated for the students on the SATs and ACTs, are all cooperating witnesses for the prosecution. They have agreed to plead guilty and testify for the prosecution in exchange for lesser sentences.

Stanford, the University of Southern California, Georgetown University and other schools implicated in the scheme have said they are reviewing the admissions of students accused of participating. Last week, Yale rescinded the admission of one student whose family had allegedly paid $1.2 million to gain entry under false pretenses.

What the complaint says

Loughlin and Huffman are the best-known figures in the scandal, and the accusations against them explain how the admissions scam worked.

Separately, Loughlin and Giannulli allegedly agreed to pay bribes totaling $500,000 in exchange for having their two daughters designated as recruits to the USC crew team, easing their acceptance to the school.

"I wanted to thank you again for your great work with (our older daughter), she is very excited and both Lori and I are very appreciative of your efforts and end result!" Giannulli allegedly wrote in an email to Singer included in the complaint.

Several brands have distanced themselves from Loughlin and her daughter, 19-year-old social media influencer Olivia Jade Giannulli, since the charges were announced.

Additional arrests are expected as the investigation continues, a law enforcement official familiar with the probe told CNN last week.

Investigators are expecting to charge more than five others within four to six weeks, according to the official, who cautioned the investigation is ongoing and this is subject to change.

Correction: This story initially misstated the number of defendants expected in court.