Look up: Venus will be impressively bright in the night sky starting this week 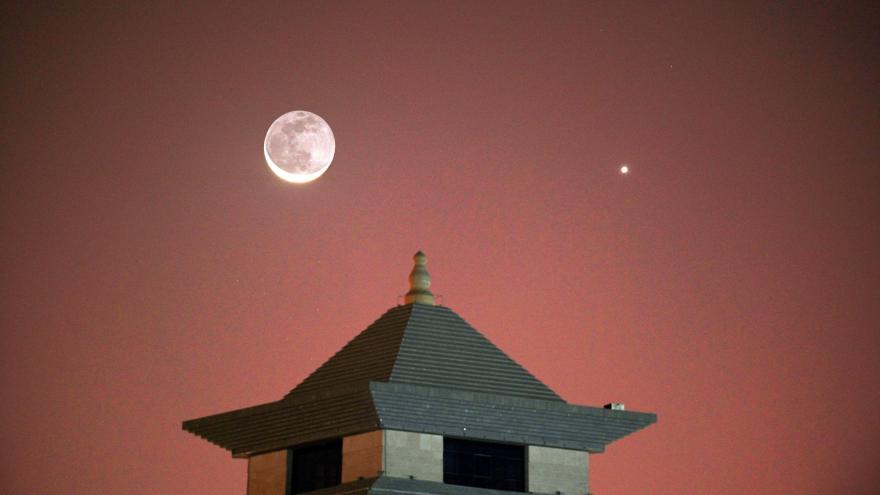 (CNN) -- Venus, the closest planet to Earth, will appear impressively bright in the night sky this week, after being obscured by the glare of the sun during much of winter and spring.

If you're in the Northern Hemisphere, look west or northwest 30 minutes after sunset, and it should be immediately visible. It's the second-brightest object in our night sky after the moon.

"It's dazzlingly obvious. It doesn't twinkle like a star but has a steady light that makes it easy to spot," said Robert Massey, the deputy executive director of the Royal Astronomical Society in the United Kingdom.

Sometimes called the "evening star," the planet's reemergence in the night sky has in the past led to an increase in UFO sightings, Massey said, with its low position in the sky just after dusk putting it in people's eyelines.

While Venus is easily spotted with the naked eye, if you look at it through a telescope you might see that it's a gibbous, slightly convex, shape.

That's because it appears to change shape as it moves between us and the sun -- a bit like lunar phases.

Venus will remain visible in the night sky until the end of year.

Skywatchers will also be able to see May's "flower" supermoon on Wednesday. This supermoon will be the closest moon to Earth in 2021, according to EarthSky.

There are two to four supermoons each year. These lunar events are often a brilliant sight to see because they are brighter and larger than normal full moons. The definition of a supermoon varies, but it's generally defined by how close the moon is to the Earth.

May's supermoon will also be the first total lunar eclipse since January 2019, according to EarthSky. It will take the moon just over three hours to cross through the Earth's shadow, but the actual lunar eclipse will last under 15 minutes.

During the eclipse, the moon will have a reddish hue from the sunlight filtering through the Earth's atmosphere, according to NASA, so somealso refer to this month's event as a "blood moon."

Depending on your location, you may be able to get a glimpse of part of the eclipse. Most of North and South America will be able to see it in the early morning hours, while eastern Asia and Australia will see it in the evening.