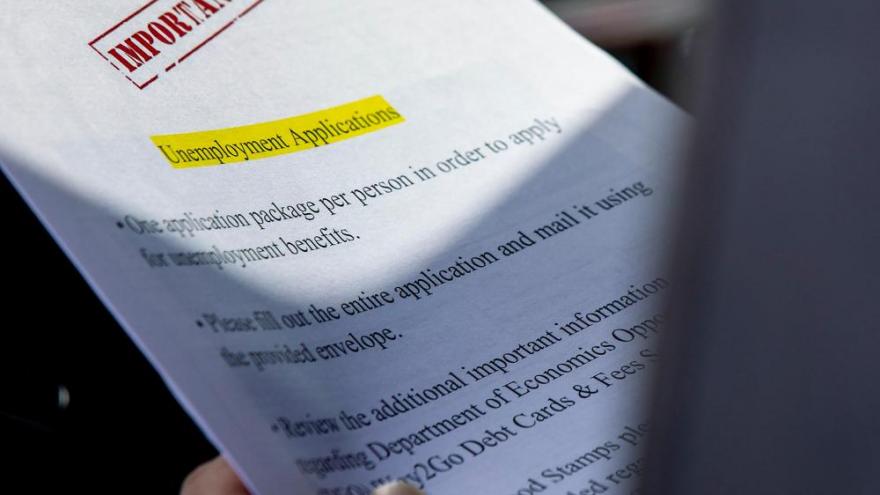 A Miami-Dade County resident holds a paper unemployment form after waiting inside their car in line at Slade park in Hialeah, Fla., on April 7, 2020.

(CNN) -- As the coronavirus pandemic continues into its eighth month, a growing number of Americans are exhausting their state unemployment benefits and shifting to extended payments funded by the federal government.

But this additional cushion won't last much longer for many people. The 13-week benefits extension provided by Congress runs out at the end of the year. And an extended benefit program that triggers on when state unemployment rates soar is winding down in some states as their economies recover.

All this could leave millions of people without a financial lifeline at a time when jobs remain hard to land.

The number of long-term unemployed experienced its largest monthly increase on record in September. Some 2.4 million Americans -- or nearly one in five -- were out of work for at least 27 weeks, according to the federal jobs report.

That's up from 1.6 million people -- or roughly one in eight -- in this situation in August.

Are you struggling financially because of the coronavirus? Share your story.

And the ranks are only expected to grow as more and more people who lost their jobs in the early months of the pandemic find themselves unable to return to their old positions or find new ones.

"The longer these workers remain unemployed, the greater is the risk that their work skills will atrophy, and they will become disconnected from the labor force," said Bob Schwartz, senior economist at Oxford Economics.

When lawmakers passed a historic expansion to the nation's unemployment benefits program as part of a $2 trillion coronavirus relief package in March, they did not think the economic downturn would last very long. A $600 federal boost to weekly benefits ran out at the end of July, and lawmakers have remained at an impasse in extending the provision.

This was not the first time the federal government stepped in to temporarily bolster unemployment benefits. It's done so during recessions since 1958, said Stephen Woodbury, senior economist at the W.E. Upjohn Institute for Employment Research.

During the economic crash just over a decade ago, the jobless were able to receive payments for up to 99 weeks -- the longest duration in the history of the program -- for more than two years.

For now, most of the jobless can access three levels of benefits that can last as long as 59 weeks, depending on when one applied for the program and what state one lives in.

State payments typically last for 26 weeks, but some states slashed their programs after the Great Recession. Florida and North Carolina, for instance, currently provide only 12 weeks of assistance.

About 10 million people were filing for at least two weeks of state benefits in a row, as of early October.

Once they exhaust these payments, they shift to the pandemic emergency unemployment compensation program, which Congress passed in late March to provide those out of work with another 13 weeks of benefits. Nearly 2.8 million Americans were covered by it in late September, an increase of more than 818,000 in a week.

This enhancement, however, runs out at the end of the year. So those who are joining it now will not receive the full amount.

Some people who were unemployed before the outbreak began or live in states with skimpier state benefits have already run through this second stage of assistance. In most states, they can then join the extended benefit program -- a standing program that provides the jobless with up to 20 weeks of payments depending on the state and its level of unemployment.

Typically, states and the federal government split the cost, but Congress agreed to pick up the full tab for the rest of the year as part of a coronavirus relief package passed in mid-March. About 355,000 people claimed extended benefits in late September, up from 220,500 in late August.

The federal government's involvement will make it more likely that states will provide extended benefits to their jobless residents, said Wendy Edelberg, director of The Hamilton Project at the Brookings Institution. States, which are contending with major budget issues and depleted unemployment trust funds, have some flexibility in determining the criteria for providing these extra weeks of assistance.

"The more federal help these states are given, the better," she said.

Until mid-August, the unemployment rate in every state but South Dakota was high enough for the extended benefit program to trigger on at some point in the year. But as parts of the nation recover faster than others, at least seven states have already rolled off, and others are shortening the duration of payments.

Earlier this month, Tommy Moran received a letter from North Carolina's Division of Employment Security telling him that he would only receive six weeks of extended benefits, instead of 9.6 weeks, because the state's unemployment rate had fallen. The Tar Heel State saw its jobless rate soar to 12.9% in April and then drop to 7.3% in September.

The Greensboro, North Carolina, resident left his security job at a retirement home soon after the pandemic began because he has a heart condition that leaves him at high-risk of death if he contracts Covid-19. Plus, his teenage daughter developed a neurological condition and can't be left unattended while she goes to school remotely. His wife, who was furloughed temporarily, is back to work at a medical office.

Moran, who already received 12 weeks of state benefits and 13 weeks of pandemic payments, is set to exhaust his extended benefits on November 7. He will then apply for the pandemic unemployment assistance program, which Congress created in March to provide temporary benefits of up to 39 weeks for certain people affected by the coronavirus, as well as those not traditionally eligible, such as freelancers.

But it too runs out at the end of the year, unless lawmakers act to extend it.

Though he could go back to his old job, Moran is afraid of catching the virus. So he will try to find a position that allows him to work from home, though he's concerned he won't be able to.

"I'm going to be forced to go back to work, put my life at risk and leave my daughter home alone," said Moran, 50, who depends on his $350 in weekly unemployment benefits to support his family. "But if I don't go back, it's going to be catastrophic. We can't survive on what my wife makes. We'd be homeless and carless."